Take it away, Claire! 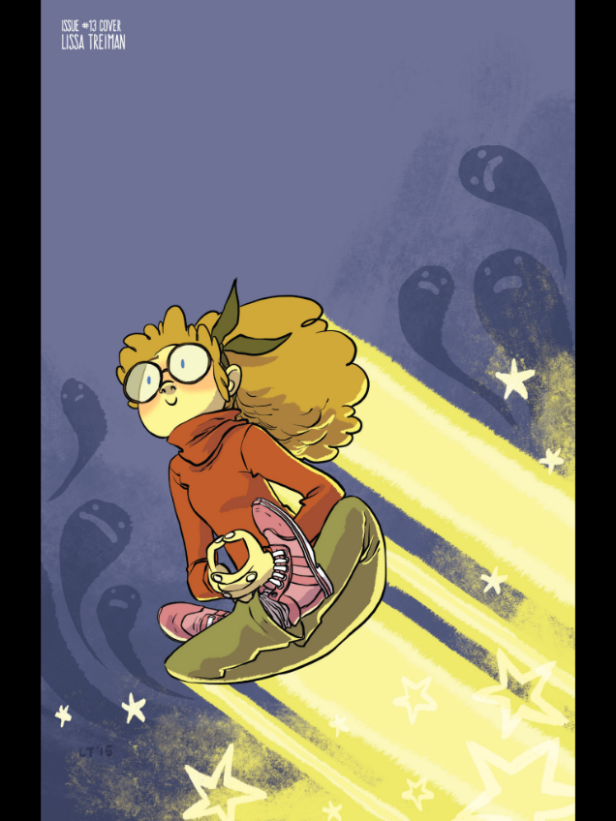 Giant Days 13! “Year two” of BOOM!’s publication, in real-world terms. Not “year two” of university. Which is clear, as we open with Esther having decided not to return to finish her first one.

Chalice: REAL! And according to the wikipedia, “Perhaps Australia’s most notable Gothic metal band.“

REDRUM: REAL! Ditto RED RUM! But this is probably just a Shining girls poster! Who can tell in this day & age?

When you put it like that, grandma, you do seem to have a bit of a point.

Page 4:
See that in panel two? A cabinet full of show-china. This is a traditional lady. Daisy’s pink backpack, here, is an outward sign of a juvenile nature.

I do think we need to discuss that Davy Crockett is apparently also waiting at the bus stop.

Page 5:
Americans, and others— do you have the national humour cul-de-sac “I can’t believe there are elaborate titles for (specifically) menial fast food jobs”? This had a bit of a cultural moment in the early twenty-first century. We can take it for granted, now, and don’t have to make a fuss, as we see here.

“Lower than a snake’s hiney”— do you need this explained? A snake’s hiney is on the ground, because a snake slithers around on the floor. I guess in other countries this might not work, because some snakes climb trees. But not ours.

A prime example of Sarin’s ugly Esther at the bottom of this page. A precious thing, to see a character valued beyond her beauty.

Page 6:
Confusing drinks names! We love a bit of that.

A Zabaglione is made with egg yolks, caster sugar and sweet wine, an Italian classic. I doubt Baker Max sell them.

Sarah Grote, Esther’s schooldays bestie. A staple character of the Esther years of Scary Go Round; the older sister of Charlotte Grote, one of the protagonists of Scary Go Round’s successor webcomic, Bad Machinery. Notable at the time for having the largest thighs of any SGR main character, and a strong line in long socks. Seen here in very tiny, elaborate shoes, which seems like an appreciable development in style for ol’ Sarah G… but they’re also bright red and ultra-femme, warning us that she is now a scarlet woman, having [redacted] [redacted] from behind [redacted’s] back.

Life advice, darlings: Never respond to a man who cold-calls you to your face.

Page 7:
Looking further into the matter of fashions, Sarah is wearing what on her hoodie? A skeleton. The goth’s livery! A clue? A clue? A clue.

Worsted is a sort of fabric; it’s also the specific type of yarn used to weave that fabric. You’ll see it in suiting and upper-style garments, so Esther knows it cos she’s fancy (and Victorian-leaning)… or maybe just because it’s from Norfolk, which is in the north, which is where Sheffield is as well as, as far as I can tell, everyone’s hometown (did you peep the landscape at Daisy’s bus stop on page six?).

Here we see Eustace, John Allison’s greatest all-time character design. It’s so strong because it’s so simple. He tries to keep his hair neat but those cute lil curls just escape it! He tries, but he’s so innocently inept. He has freckles, he’s always worried, he avoids conflict. He’s the Good Posh Boy, and he’s useless (rhymes with Eustace!) and I love him. RECALL HIM FROM: the time Esther got cross with him for not visiting, got drunk, and had experimental sex with a waster with hat hair! Then he dumped her. And that “began it all,” really. The foundational “mistake” of Giant Days.

Page 8:
Yes, we return to the matter of fashionable cues. Here, on this page, Sarah and Esther discuss Esther having wronged Eustace, Esther having not really meant to, and Sarah’s fondness for Esther. WHAT WE SEE is Esther in her work clothes— not herself, as she claims.

Sarah? The skeleton hoodie. The red shoes. The tiny red shoes, with a skull upon each. Given what we know from later in the issue, it can be assumed that the text she receives is from her secret beau. Sarah is standing here in Esther drag, dating Esther’s boyfriend, but still wanting to be Esther’s friend. It’s sad! It’s not admirable, but it’s still sad.

Page 9:
The sign says “welcome to Tackleford,” because that’s where Scary Go Round and Bad Machinery, and Esther, live. Yay.

The Manchurian Candidate is a film starring Angela Lansbury, and also some men. It’s about, approximately, Angela Lansbury brainwashing her son to assassinate the president. It’s also a novel and remake.

Page 10:
A moat: a private pond that makes an island of your house. We don’t really do these any more.

Esther is middle class, but “middle class” can mean a lot of different stuff.

Page 11:
Esther’s mother is so refined that she’s managed to grow her grey streak in a perfect gather. The shoes thing is probably a register of class: Esther’s family doesn’t have to worry about not being able to replace anything that gets dirty thanks to outdoor shoes coming inside the house.

The shoes thing is also a white person thing. Middle class Asian or Black Brits would never keep their shoes on in a stranger’s house.

The stair masks remind us that this family is not only “well off” but also “intellectual”— they have an interest in other cultures, you see. Maybe even an area of specialisation. Ooh, and la la. Exactly the people whose daughter would study English and try to drop out.

Vile is such a great word to drop into conversation. It classes you up in the space of a single syllable. Only dignified people use the word vile in out-loud speech.

“Freebasing” is supposed to mean smoking, apparently (I wouldn’t know because I obey all laws), which Esther is NOT doing, so a big buzzer sound and a short course in drugs use for Big Linds, immediately, please.

Page 13:
Lindsay calls Esther “Katy Moss” instead of “Kate Moss” to imply a deglamourising; Kate Moss knows what’s what and is a famous supermodel who can’t be told anything, but Katy Moss is a kitchen-table form, someone able to be mothered, who needs guidance, less worldly. Lindsay is full of wisdom and clearly knows about Sarah and Eustace, hence “[…] Awful story to tell later in life. Speaking of which,” re: Milford’s party.

Page 14:
Is Daisy’s vacuuming urge evidence of the St Mary Mead mindset, where people with less money must apologise for it constantly, or of an upbringing that emphasised communal duties regarding domestic life? Maybe both.

Daisy and Susan have both decided to ignore all offers and take their shoes off whilst in the house. Esther doesn’t even consider following their lead.

Page 15:
“A tribute to Nu-Metal.” Absolutely vicious, absolutely deadly. If you care to learn more about Nu-Metal, please find another teacher. I do not wish to remember.

I also refuse to help

Alco-Frolics probably isn’t a real shop name (I mean maybe) but it’s indicative of various genuine commercial attitudes. In my village, there was a campaign to rename Bargain Booze because it was felt to encourage a poor approach to the devil’s juice.

“Ride a kibbutz through sub-saharan europe” is a nonsense sentence mashing together various phrases common to a youthful adult’s identity-forming travel.

Page 16:
Esther has a bag of tinnies, Susan has a bottle of vodka. Daisy, bless ‘er, has brought a box of herbal tea.

Milford has had parties before, and in fact he has had ones that involved notable Sarah Grote kisses. Enjoy a few pages of Scary Go Round, won’t you? That sequence will also introduce you to Carrot, seen here in panel four— Carrot’s literary stylings have also been seen earlier in the SGR story. I think Carrot is a geordie. Whether or not that’s true, his panel alone should win Sarin & co a character illustration award. It’s beautiful, and it is perfect.

Page 17:
Sarah’s big studded belt and tunic combo honestly make it hard for me to root for her. I apologise for my prejudice.

Esther, at least, is honest enough to recognise that Sarah speaks the truth.

Page 20:
Esther and Eustace’s dynamic summed up in panel 3: she’s mean in a sexy way, he likes how it unsettles him in a sexy way, but also she’s just being mean and he’s just unsettled. Panel four is sensible & sad, because it’s the real decision, made in calm: “we shouldn’t be together.” They easily get carried away by one another, but it doesn’t lead anywhere grand.

They still have human respect for one another though! Are you crying? Maybe I am

Page 21:
Susan is NOT from the North? Okay, mark that down.

William the Conqueror has been forgiven by us Northerners, unlike Thatcher.

Page 22:
Whoever it is is as devoted to masks as Esther is devoted to the gothic lifestyle. Intensity runs in families!