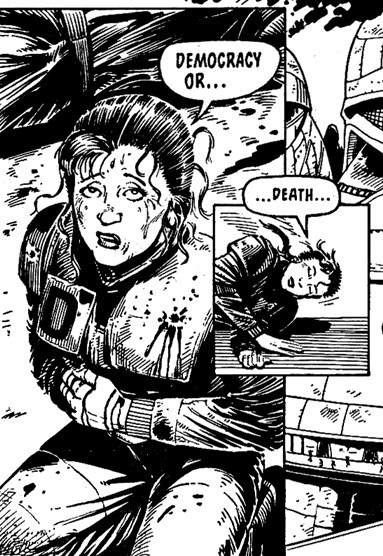 “Letter from a Democrat” was first published in Prog #460 in the year 1986. It’s a short story, running a mere seven pages and written by the regular team of the time, John Wagner and Alan Grant – lettered by the great Tom Frame. It was drawn by the solid hands of John Higgins (who would later become renowned for his coloring work on Watchmen and The Killing Joke). There were no hints given beforehand that this story was going to be in any way unique. Sure, it featured what is still considered by many to be the best writers in the strip’s history, but these folk were churning out work at such a rapid pace that no one expected greatness on a weekly basis: a week before Prog #459 gave us a ridiculous, even by Judge Dredd standards, story about ghost pirates. A week later Prog #461 will give us the first in a rather forgotten serial called “The Falucci Tape” (which at least had the advantage of being drawn by Cam Kennedy).

Yet I would wager this comic, quality-wise, against the best 1986 has to offer – against Watchmen and The Dark Knight Returnes or the first collection of Maus. It is a gut punch of a story, a real soul destroyer. The fact it comes from such workmanlike conditions, another chapter in a never-ending corporate strip sandwiched between two mostly forgotten stories, makes it even more memorable. Wagner and Grant had built up Judge Dredd as a strip and as a character in a very particular manner; the readers knew what to expect, or at least they thought they knew.

For the story itself – well, Judge Dredd is hardly in it; certainly he is far from being the “star” of the story. Instead the focus is on one woman, Hester Hayman, and her family –  who are shocked to learn that their matriarch is also a member of a “radical” group called Democratic Tendency.

When Hester and her comrades take over a live broadcast to demand the Judges surrender their authoritarian rule of the city, she and the rest of the group end up being gunned down (with her children watching every second of it). After the event ends, Dredd comes for a home visit to warn off the husband and the tykes lest this exercise give them any bright ideas in the future. “Democracy is not for the people” he tells them sternly, but with little flourish; he must have done such things dozens of times. This family’s most tragic day is to him just another routine day of a boot stomping on a human face. Forever.

Interposed with the mostly silent events and actions, the bulk of the text here is actually provided via the titular letter – with Hester explaining to her husband why she must do what she does.

“I suppose it was the time when we were picnicking in the block park and little Simson threw his ball and it hit that judge…. We both went white. Remember, Gort – remember how afraid we were? How helpless we felt?”

Dredd, at least under John Wagner, was always authoritarian; but the villains he fought were so horrible, and the story was usually given from his POV, so the reader learned to take him for granted. Judge Dredd was, in the words of critic Douglas Wolk, a ‘useful monster.’ This story takes us out of Dredd’s POV so that we are now seeing him as the normal citizens see him… as Big Brother.

All too often the fabled dark humor of the strip was used to pave over the unpleasantness of it all. During the Apocalypse War storyline there’s this great moment when Dredd is contrasted with the invading soviet general as both are equally dismissive of the suffering civilians: “The people? What have they got to do with it?” sneers the Sov general in one panel. All very sinister, but turn the page and it’s Dredd’s turn – “The citizens? What makes you think they’d be interested?” he questions. Sure, it’s dark – but humor helps take the edge off. At the end of the day that story is still one in which Dredd defends his home from unlawful invasion which starts with a biological weapon attack upon the citizenry of Mega-City One, so some perspective there.

There are no comedy bits in “Letter from a Democrat.” According to an Alan Grant interview (sadly no longer online) the original story was meant to be called “Letter from a Baffin Island Nudist” and was censored because the folks high up didn’t want do a story showing nudity. I’m not sure if this is true or not, but if it is – good one for the censors! Without the covering blanket of comedy Wagner, Grant, Higgins and Frame were free to show Dredd’s world as-is. It certainly was a bold move: with “Letter from a Democrat” they were telling their readers that Dredd was an outright killer… that he would kill their mothers and wouldn’t think twice about it.

I think about this a lot, about the way writers try to make these complex anti-hero types in order to intellectually challenge the readers only to end up with someone they look up to, someone who is “cool”. From Rorschach through to The Punisher… In our mind we know we must reject them, but in our heart people too often fall in love with them. That is what Wagner & Co. understood, and that is why they had to write the story like this: “Letter from a Democrat” is not something that will be retconned out, or erased from the continuity (few things are retconned in Judge Dredd’s long history, which is one of the things that make it great). We will never discover that Hester was actually carrying a bomb that day and the Dredd had saved millions. No. This is something that is always going to be there when you look at that character – whenever you cheer him in another story in which he puts his fist through the skull of some Dark Judge, you ultimately have to remember that he is the man that did this.

Higgins’ art, like the story, is devoid of unnecessary flourishes. There’s a stylized Ezquerra-esque part when the judges invade the studio and we get a shooting montage, but otherwise it’s all solid figure work – he gives these characters, especially Hester, dignity. Most of the citizens in Judge Dredd stories are overgrown children, dumb and excitable. Hester on the other hand feels like an adult and everything about her says responsibility – which is why she makes the impossible choice to die. The shot of Hester’s face as she gives one final talk to her comrades is such a great bit of character acting: She’s saying it so matter-of-factly. 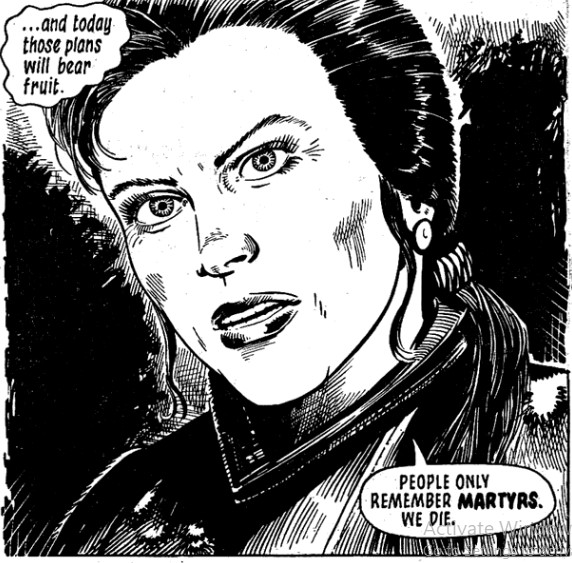 Hester had made peace with what she is and what she must do, and in that she transcended the limits of control set by the Judges. In the following page we see her face and body as she kneels after being shot through her heart. It’s somewhat melodramatic, but it’s the right kind of melodrama – because while she believes in what she does, she is also playing a role for the audience at home. The final shot in the story is of her hand, as blood drips slowly until it covers her wedding ring “but what kind of mother could stand by and see her babies grow into frightened, beaten people like us? Goodbye. Gort. Your loving wife, Hester.”

It’s a lot to cram, emotionally, into seven pages, but the team made it work because Hester’s fears, not for herself but for the future of her children, are entirely justifiable. This is not a new angle on how the judges’ system works: it’s just something that was always simmering beneath the surface of the strip. Not only that, it also sets up later storylines with other “radical democrats” (who would appear in some of the best Dredd stories including America and Total War) and it informs the results of the referendum storyline (in which the Judges allow the citizens to vote whether or not they should stay in power and win mostly through public apathy) which would take place over five years later – memorably showing us an annoyed citizen trying to change the channel in boredom as their fate is decided.

Over the years later the subjects the story addresses and the inherent violence in the police forces of America means this feels even more cogent. With the rise of no-knock raids, the use of SWATing as a terror tactic and the militarization (in both equipment and mentality) of police forces throughout the USA, “Letter from a Democrat” feels as true to life now as it has been all these years ago.

Tom Shapira’s writing has been featured on many different websites, ranging from Multiversity and The MNT right through to recent pieces published at The Comics Journal. If you’d like to read more of his thoughts on Dredd, then good news! He’s one of the featured writers in the collection “Utopia and Dystopia in the Age of Trump”, which will be published in June. The best place to find him online, however, is on Twitter, right here!

2 thoughts on ““Democracy is Not For The People”: Judge Dredd’s ‘Letter From A Democrat’”