Bard is very very angry and you bet we’re only an issue or two away from getting into his inevitable tragic backstory! In the meantime, here’s an issue where he puts Batman into an inescapable deathtrap which Batman happily enters into for no apparent reason. It’s Batman Eternal #35!

In three hours time – a statement which in many ways makes you rethink the very concept of time, for how are we able to peer into the future in such a way as to still root ourselves in the present which must be right be truly the past? – the Batmobile races out the side of a skyscraper, like in that bit from Fast & The Furious #7. Ironically, the skyscraper is one formerly owned by Wayne Enterprises. Poor Batman.

Three hours earlier, which is two weeks after the end of the last issue and let’s just not get into the timeframes right now shall we, Bruce Wayne is enjoying a coffee with Lucius Fox. Of course, for things to get so dire that Bruce Wayne has to get out into the public eye is worrying enough, but that he’s in the daylight? Yikes. Lucius makes a crack about not only liking his job at Wayne Tower because it’s the only place in Gotham where he can’t see Wayne Tower – I see you, Guy de Maupassant – and tries to define what “having your assets seized” means to us, the laypeople reading this issue. Bruce’s money is gone, so hopefully Lucius is paying for this drink. Also gone: Wayne Manor, which has been given over to Arkham and is going to be the new asylum in town.

As Lucius heads off to settle the tab, Julia calls in and confirms that construction is going on above her head to turn the manor into an asylum. Apparently all the secret passageways have been cemented over and won’t be an issue (tell that to the creative team behind the Arkham Manor series which launched around this time) and the batcave is secure. Well, aside from the fact they have Hush locked up in the cave, in a big glass prison cell meters away from the main console which has never been seen before in the comics. Handy it was just out of sight this whole time. The plan is, get this, to keep Hush within sight of the main consoles in a chamber which isn’t bulletproof and isn’t soundproof either way. Genius work.

Julia’s like “can I just shoot him” and to be honest we’d all be happier if she did.

As Bruce gets up to leave the cafe, Lucius makes one more thing clear – he’s under the control of Jason Bard now, which means all the Waynetech will probably start to go faulty in due course.

Speaking of: Jason is hanging out in some cancelled restoration projects being built by Wayne Enterprises,chatting to his girlfriend Vicki Vale over the phone. She’s leaving town for some reason (spoiler: because her boyfriend is being super-weird all the time) and he’s so upset he’s basically confessing his plan to her right there and then. Of course she isn’t really listening, because she’s a go-getting journalist in her own right and she’d rather go find the truth than listen as it’s being literally told to her down a phoneline. He has one more thing he needs to do before he’ll come clean, though, which I guess is to get stopped by Batman or one of the Robins. Maybe Tim Drake! He’s been missing a while now.

The call ends and we find out that Jason is stood right next to half of the GCPD whilst confessing his guilt out to Vicky, jesus. His plan now is to blow up parts of Gotham until Batman pays attention, which is bizarre and yet somehow signed off by both Maggie Sawyer and Harvey Bullock, both of whom should’ve lobbed him off the roof by now. Two buildings get destroyed, and sure enough Batman comes running over – tracked by Lucius Fox. As Batman drives into the trap, Julia tries to stop him only to get shut down by some random masculine nonsense spiel Alfred’s already heard a million times before. Julia wants to consider why Bard is even doing this, considering Hush, his boss, is now locked up. Bard cuts into the call and tells Batman to pull over. 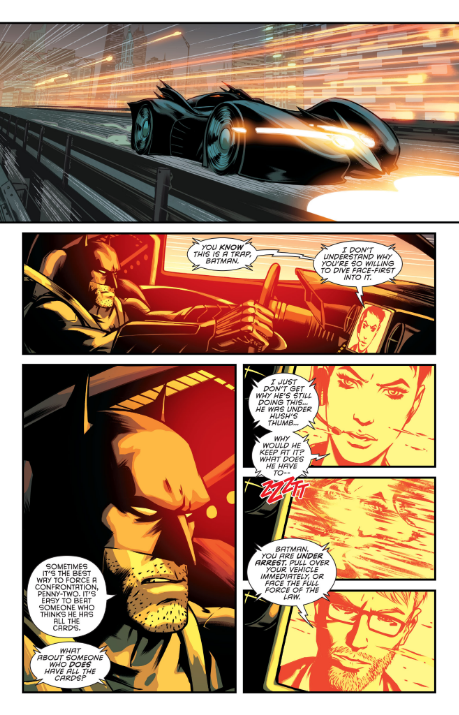 Vicky ends up in Detroit, where she heads to a bar, flirts a bit, and then immediately jumps into interrogating the barman without even trying to get him onside first. The barman knows something about Bard’s past, so Vicky drinks some whiskey and waits to hear the story. She doesn’t have a voice recorder on her, because of course she doesn’t. Even I carry a voice recorder, and I’m a comics journalist.

Bard tries to convince Batman to stop the car, and gets nothing but silence in return. He locks up the systems of the car, puts some kind of superpowered wire mesh in the way of the road, and tries to catch Batman. The Batmobile crashes straight through it and… it’s hard to know if it’s causing damage. The roof seems to start falling off, which apparently means they can now take control of the power steering. Bard commands to steer him through a building, and boost the jet engines – he’s not getting any resistance to this? This is mad. Harvey Bullock at least complains, but Bard nips past and presses a button on the computer which puts all his orders into action.

Julia cuts back in and notes that the cockpit is jammed shut and she can’t do anything. Cool beans.

Bard gets control again and rams Batman through a skyscraper, which leads Batman to finally try and crack Bard. He mentions Hush, but Bard doesn’t care – he’s holding a badge belonging to someone called “Jodie Hawkins”. I sense a flashback issue coming on. The Batmobile flies through the building and out the other side, hurtling off towards the ground with no control and no escape. As it flies into oblivion, Bard announces that this is personal for him, and that there’s a reason behind all this.

The final page cuts back to the bar in Detroit, as the barman refers to something in the past which caused everything. Yeah, we’re definitely getting an origin issue next week.