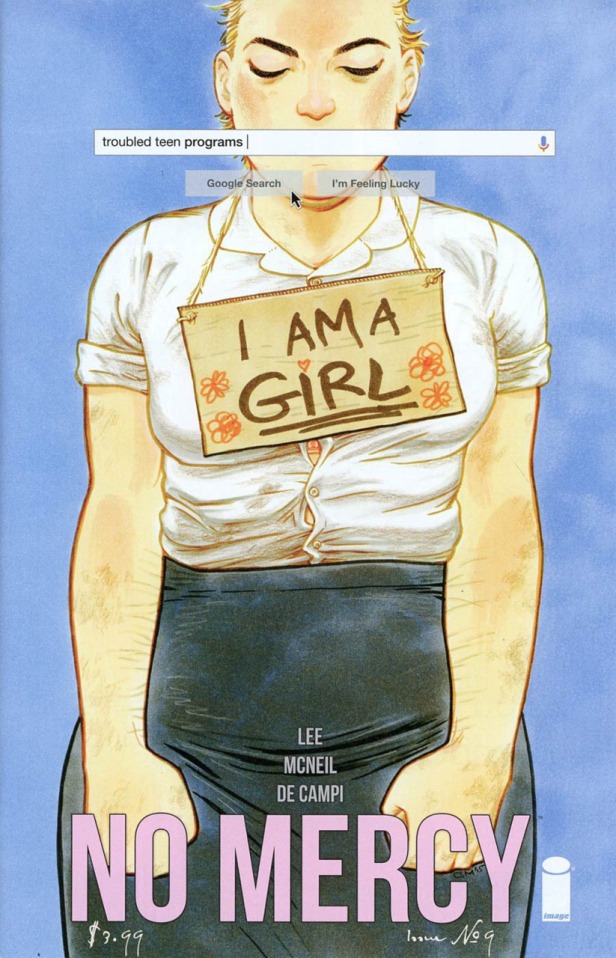 I’ve been struggling with this issue for a couple of weeks now. It’s not the first time that I’ve been in that situation, so I’m taking the advice that was given to me back when it was the first time: I’m gonna write about it, struggle and all.

A struggle’s appropriate, after all; that’s what the issue is about. No Mercy is, from the cover description, a story about teens who are forging their own civilization in the jungle. It sounds very Lord of the Flies to me – that’s not a criticism, just an observation, one I’m sure that many have made. I haven’t actually read the series aside from this issue, so I want to note that point. I am, specifically, reading this issue because it was made available for free by the author herself.

No Mercy #9 tells the story of a boy. The boy is called Charlene throughout the story, and so I will call the boy Charlene. I don’t know if there is another name he prefers. I don’t know the context of the story outside of this one. I know that he is trans. In this story, he is sent to a re-education school. It is a nightmarish place, where he is degraded and thrown into cages to suffer in the sun.

These schools are real places; that’s part of the point of the issue.

It’s an unflinching look at such an environment; the pain and torture one is forced through, the systematic degradation of the self in pursuit of homogenization, compliance. At the end of the issue is a partial list of deaths at such centers, to help drive that fact home. It is a unique facet of being a marginalized identity – once one learns about such places you will always carry, in the back of your mind, that but for luck and circumstance this could be you. You will always carry the notion that luck and circumstance both change. It is an especially difficult thing to carry today, with LGBTQ communities under attack more than ever in the U.S., the U.K., Japan and Brazil.

But here’s where the struggle is. I’m angry with this comic. I hate it for the pain it draws out of me, I hate it for the rage that wells up within me. I know that these, too, are the point, but knowing does not lessen my hate. Whatever its technical or creative merits, this comic hurts. It hurts to read about what these children are enduring. It hurts to watch a teenage girl being assaulted by the men entrusted with her care. It hurts to watch her hurl herself to death rather than endure another moment.

I want to be clear that DeCampi deserves a lot of credit for this issue. Her work to explore, in detail, the indignities that people are forced to endure right here in the U.S.A.’s own backyard is commendable. There are individuals for whom this issue will be a first glimpse; the first time they might know of such schools, or if they’ve heard of them, the first inkling of what goes on there. So the work’s important.

I keep coming up against the hurt of it. The rawness. The issue needs a salve of some sort; the narrative, by necessity cannot provide it. A backmatter essay might’ve helped. So too might’ve knowing what Charlene’s real name is, so that I do not have to refer to him by his deadname over and over. This, too, is an indignity, to put the knife in the reader’s hand. I do not wish to hold it.

I’m frustrated too by the choice to offer this issue for free; DeCampi provided it online because she’s proud of it, and described it as a standalone issue. That’s… technically true, I suppose, in that it is unconnected, plotwise, to the rest of the run’s narrative, but I question whether it’s true from the perspective of reader interest. Having not read No Mercy, nothing in this issue makes me want to; what I see is violence without reprieve against a character who is like me.

That violence is depicted unsympathetically, but it is also not restrained or limited in any way, for the reasons I’ve gone into above. It’s important that folks know. However, as well meaning as DeCampi is, in providing this issue for free, with the flaws that it contains, she betrays a position of privilege. While the issue is offered up with a content warning, it’s not offered up with a warning about something like, say, the issue of the lead character being deadnamed throughout. A trans writer – or even a trans editor – would’ve noticed a thing like that.

Because there’s no quarter (or, ha, no mercy) given; because the lead character is a member of one of the most at-risk marginalized demographics in the world; DeCampi is asking the reader to take an awful lot on faith. I don’t expect to be given a guarantee that things will be alright in the end, but I would at least like something to entice me into reading more. I don’t get that here. Because of that, this story feels… pointless to me. I’m hurt by it and angered by it and left feeling that both occurred for no reason; that there is nothing here that makes me feel empowered – only like my existence is viewed as a kind of misery porn.

That hurt isn’t left with anywhere to go, it just settles inside me. Like a stone.

Despite her claims, Nola Pfau is nothing but a good influence and is everything that is good about the comics internet. She’s the Managing Editor for WomenWriteAboutComics, as well as a frequent contributor to the site as a writer – for more of her writing, check out the work under her byline. You can find her on Twitter here.

No Mercy #9 was voted as the 37th best comic of all time by critics. Head here to find out more!

This post was made possible thanks to the Shelfdust Patreon! To donate, head to our Patreon page here!