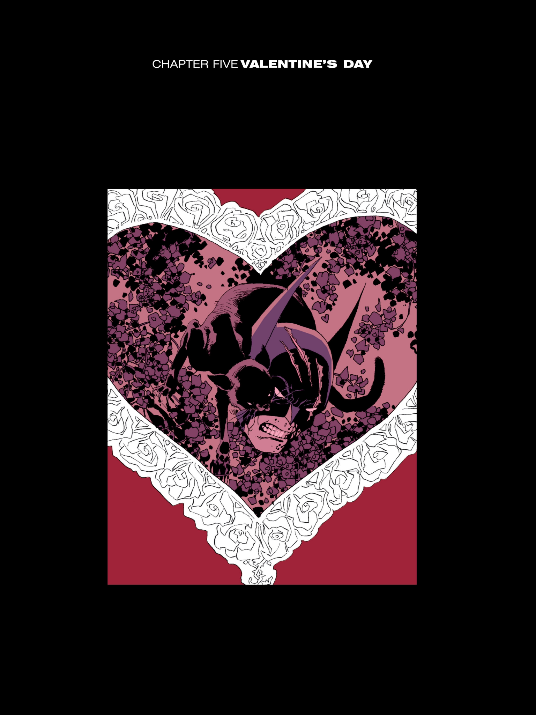 Nothing gets done on Valentine’s Day, as everybody has a pretty lousy day in what is probably the most forgettable issue in this long-form story. Considering the opening issues offered so many ideas and directions in which the story could fall, from a character-driven perspective, it’s disappointing to find that nothing is really going anywhere by the time we hit issue #5. Batman and Selina continue to dance around each other, Gordon and Dent let down their wives, and that’s about it!

The most pressing point from last issue is the murder of Alberto Falcone, of course, who fell off a boat several weeks ago and was never recovered. The most interesting scene this time round doesn’t play into Valentine’s Day at all, other than to help emphasise how alone and fragile Carmine Falcone has now become. As he stands in the cemetery to genuinely grieve for a son he honestly loved, it’s a reminder that there are meant to be stakes in this story. For the last few months Carmine has been surrounded by death, and by a serial killer who seems to be truly fixated on The Roman. At this point in the year, and especially on the only notable holiday during February, there’s something poignant about seeing this mobster leave himself completely open.

There needs to be some kind of escalating drama in a murder mystery, and here’s it’s provided not by the curdling of the Gordon/Dent/Batman trio (which seems to be taking an incredibly long time to get to a boil) but instead by Falcone gradually unravelling. What’s interesting really is that so far we’ve not actually seen Falcone’s crimes – we’ve seen him try to bribe and intimidate people, but The Long Halloween presents him more as a harassed businessman than as a active criminal and participant in unforgivable crimes. It’s because of this that the comic is able to trade in the typical talk of ‘honour’ that inevitably comes along in any story about organised crime. Falcone says to Batman that Alberto was “innocent” because he was never involved in the business, which is telling.

Batman’s appearance in the graveyard leads to some severe emotional whiplash, as he throws a guilt trip on Falcone which seems unnecessary in the extreme. For all that Falcone has done, it seems out of character for Batman to be the one who shows up during a private memorial just to attack a mourner. That Catwoman then shows up is a bizarre choice, with Batman eagerly and happily chasing after her without a second thought to the idea he was meant to be trying to intimidate Falcone only a few moments prior. He runs off like a lovesick puppy, which must confuse Falcone – and isolate him further. As Batman says, Falcone is now a “little man”, and his family are dead. His power has died with them, it seems.

The other power balance explored in the issue is between the pairing of Jim Gordon and Harvey Dent, as carefully exacerbated by their meeting with Alfred. They head to Wayne Manor in the belief that Bruce Wayne may be implicated in the murders taking place in the city, but find themselves in a cavernous entrance hall with a surly butler and no sign that the notorious playboy is anywhere around (he’s actually on a date with Selina Kyle, in a scene which struggles to fit into the pacing of this story. It’s meant to be taking place during one day!) Gordon is anxious to get away, certain that Bruce can’t be involved in the crimes – possibly because he knows that Bruce is Batman, but that’s not addressed here.

Harvey is determined to stick around and make himself a nuisance to Alfred, though, taking the butler’s good courtesy to insert himself through the front door and have a quick look around. His forthrightness turns his passive-aggressive barbs into straight aggression, which is only stopped when Alfred reminds them both that it’s Valentine’s Day, prompting them to realise they’ve forgotten to get anything for their wives. The scene cuts away, returning later on in the issue as they both arrive home late, clutching matching crappy chocolate boxes. Barbara sits in the kitchen waiting for Jim, while Gilda falls asleep in bed. It’s a fairly pathetic showing from both men.

What’s especially sad about the scene is that Jim didn’t even think Harvey’s lead was worth investigating, but he went along anyway. Jim should’ve been at home with his family, but instead he decided to lend support to his friend’s wrongheaded hunch, leading them both to waste their day. What’s really surprising about The Long Halloween so far is that despite it being known that there’s a serial killer who only operates on famous holidays, nothing seems to be done about that fact. There are no extra precautions in place, nobody is keeping an eye on where the good and bad of Gotham are. Bruce Wayne’s absence isn’t treated as suspicious, even though he’s gone missing with no good explanation as to where he is on Valentine’s Day. You’d think that’d actually merit some investigation, surely, if the DA has some kind of lead?

As it turns out, Bruce Wayne is away with Selina Kyle when the latest Holiday murders – a bunch of Sal Maroni’s men, this time – take place. A third crappy box of chocolates are left at the scene, indicating that perhaps Harvey is leading the investigation astray on purpose. So far we’ve never see what Harvey is up to while each murder takes place, and it does seem like the creative team want him to be the main suspect in the story – there simply aren’t enough suspects in order for many other characters to be the killer. Certainly, Batman doesn’t seem to care, as he sits out the investigation for another month while he busies himself with posturing with Carmine and flirting with Selina. At some point, this story is going to have to address the murders which are going on, and it can’t just be Falcone who gets development from them. The Long Halloween desperately needs a kick of adrenaline.

So I’ll see you all for St. Patrick’s Day!