Hush is changing up his plans, going after Spoiler and going after Batman’s secret stashes hidden round the city. With a whole load of subplots to arbitrarily round up and tie off before we head off in a new direction, there’s no time for us to do a lengthy intro! It’s Batman Eternal #32!

After getting clotheslined off her bike, you’d think Stephanie might want to take a moment or two, perhaps reconnect her head to her body. But no! Turns out you can get chopped in the neck when you’re doing 60mph and still be absolutely fine, peaky even. She faces off with Hush, who has a gun pointed at her, and yet somehow she gets the drop on him with a can of mace. Ha! Should’ve taped over the eyes, Hush! What a design flaw. She follow up by trying to punch him, which only ends in her breaking her hand. As Hush regains the power dynamic, he’s interrupted by the arrival of that Bat gentleman. What’s his name again?

The two blokes start fighting each other, with Hush voicing his disapproval of this latest Bat-sidekick. Coming from the guy who once set up a hugely elaborate and not-entirely convincing plot predicated on the importance of Jason Todd to Batman’s psyche, that’s quite a blow for Spoiler. She gets her revenge though! In the form of revving up her bike and riding it straight into Hush. Most people would consider that the end of their day, but Hush casually throws a grenade at them and runs off. As Batman shields Steph from the impact, she takes the opportunity to peg it herself.

Later on, Batman happily abseils down into the ruins of Arkham to pick up Batwing, just in case you thought there might be more to this storyline. That’s that dealt with, then! It definitely feels like we’re setting up for another change of narrative here, doesn’t it? The reappearance of Jason Fabok – DC’s house artist of choice – certainly suggests so. Batwing’s all sorted though, so that’s the end of that, I guess. Don’t ask about Corrigan.

Alfred also returns to the Batcave, to give his daughter a hug. She likes him now, and he doesn’t have fear toxin in his head, don’t worry about it.

At the GCPD, Jason Bard slowly limps his way up to the rooftop, where Hush is waiting for him. Jason whines about his current situation, a trait which Hush calls “unendearing”, which isn’t a real word. They’ve had a change of plan given that they weren’t able to destroy the beacon, oooh, it feels like six years ago now. Maybe in-story it was yesterday? The plan is to cut Batman off, so presumably they’re going to hide Gotham’s supply of black paint. 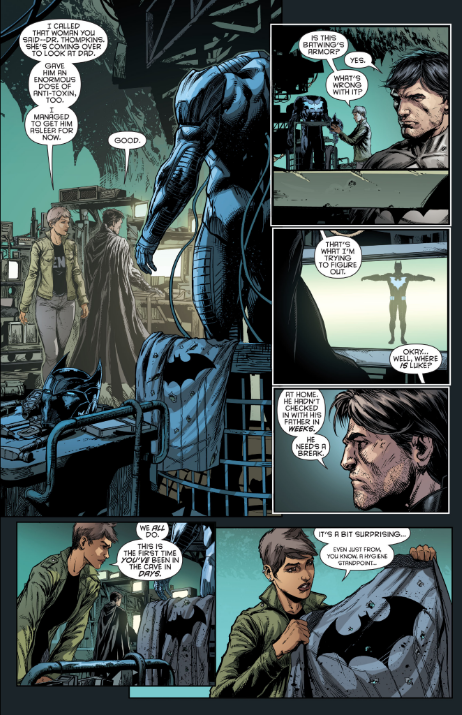 Back at the Batcave, and Julia says that she’s given Alfred a dose of convenient “anti-toxin”, so that’s certainly handy. He’s probably going to be written off for two issues to have a nap, and after that he’ll be back making rounds of cucumber sandwiches like he was never gone. Batwing has been rescued, and sent to his dad’s house for a rest. Meanwhile, Bruce is looking over the Batwing armour, which is apparently messed up somehow. That’s not the worry though – Batman’s just read the last few pages of the comic because he already knows that Hush is trying to track down and cut off all his Bat…safehouses. He smoulders heroically.

Next day, Jason Bard has hobbled back down the stairs and over to Vicki Vale’s apartment, which is weird. She has some red loveheart chairs lying around and a giant TV… and nothing else. She’s just the most tragic character in all of comics, I feel. She’s upset that Jason has hurt his legs, but he’s got an important wad of papers for her, which he wags around knowingly.

You’ll of course have guessed that it’s a list of all the BatSafeHouses which were first referenced only one page ago, but the comic decides to just go back to Batman and Julia and make it clear that they know that we know that Hush knows. It’s just like that episode of Friends! Hush uses Alfred’s DNA to get access into the first safehouse, anyway, and he takes a look around happily. He spots a box of explosives – because of course Batman is well-known for his continual use of explosives – so I think we all know whats coming next.

As the army round up citizens who are out after curfew, a bomb goes off next to their vehicle, killing officers and civilians alike. In the aftermath, one thing is left lying right in the centre of the impact – a batarang…