The Asylum has collapsed and supervillains are crawling out the wreckage – all the villains too boring to be used in a meaningful matter during this story, in fact! Meanwhile, below the ground, Alfred and Bane have a promising team-up which ends the only way it ever could: with military-grade chloroform. It’s Batman Eternal #31! 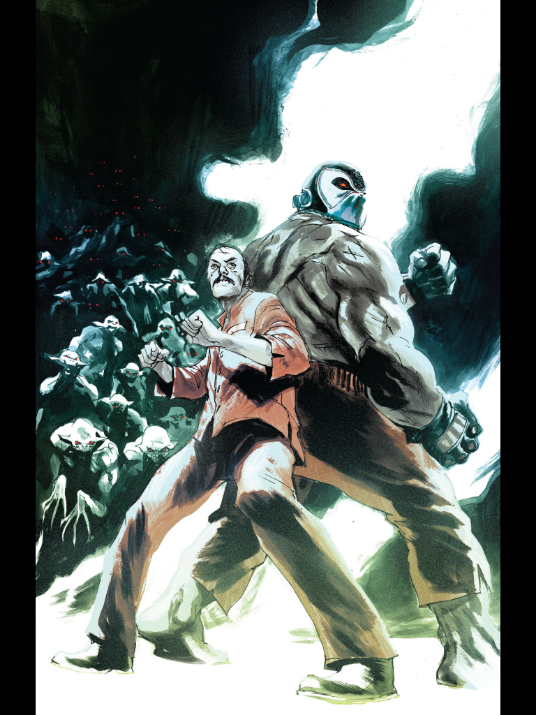 Alfred is trapped deep down amidst the rubble of the broken Arkham Asylum, unable to move with a giant piece of stone covering his torso and pinning him to the ground. What a perfect time, then, for him to recall his old army instructor, who goes full R. Lee Ermey – but in a British way – demanding that Alfred recites “the pyramid of survival”. Apparently the pyramid is based on a foundation of “will to survive”, which has knowledge on top of it, and then training at the top. Of course this makes no sense at all, but he is still hopped up on fear toxin, I guess. How do you even build a pyramid? I’m pretty sure that’s still a general mystery, and I’m definitely sure that the people forced into building them didn’t survive all that often.

In this scenario Alfred gets to live for a little while longer, because good ol’ Bane picks up the wreckage and forces Alfred up to his feet. Hurray! Bane is here to save the da…. wait a minute.

At the top of the hole, police and rescue work have the location locked down, so Batman can’t escape. Noticing someone down there, a worker stretches his hand out… only to have it frozen off by Mr Freeze. You’re not going to get much in the way of good Doc content in Batman Eternal as a whole, so please accept this and hold onto it at night, Freeze fam.

In the bottom of the hole, right down at the bottom, scraping the bottom one might say, we have Joker’s Daughter, whose bomb vest turns out to be a vest made of Plasticine. Batman gives her the ol’ one-hit knockout for old time’s sake, and I think… I think this might be our lot for Joker’s Daughter in this storyline! She didn’t amount to much, but that’s to be expected for the character who immediately became my least-favourite of all time and then sunk lower as time went on. Enjoy limbo, whats-yer-name.

On the surface, we have Clayface, Mr Freeze and Zzazz running around killing people – Freeze seems to have started hugging people to icy death, which is a gimmick I quite like. It’s looking hairy until Batman jumps out his hole and freezes Clayface into submission, just like in Arkham City. Um, spoiler. Whilst he does that, he asks Julia to sort out this whole Hush situation, and find out where her dad is, oh and can you just fix the Riddler too please. It’s times like these that you realise how much the Robins put up with over the years.

Harvey Bullock won’t let the police shoot Batman in the head, which is treated as a big heroic moment for him, even as it’s shown that Batman is literally the only thing stopping three murderers from killing the entire police force. Your men really need to rethink their priorities, Harv. Batman takes everyone out, anyway, so there you go.

Down below the Asylum, a promising Alfred/Bane team-up in blossoming right in front of us. Bane figures it’ll be useful to have someone walking behind him so that person will be the first to be attacked if something blindsides them from behind – smart move – and also isn’t particularly worried about Alfred beating him up. So they’re a team! They walk around for a bit and Alfred annoys Bane by talking way too much, because that’s what Alfred is used to doing around Batman! I like that touch. Bane tells him to shut up… just as Alfred is attacked from behind by a bunch of possessed inmates and stuff.

Julia works out that Alfred is in Arkham, so that’s a worrying moment for her I guess.

In a riveting page, Vicki Vale is stuck in traffic until she decides to get out her taxi and complain that she’s missing all the action. We aren’t too happy either, Vick. Happily, Steph Brown rides by on her bike, being shot at by the police. She rides round a corner and straight into a clothesline from Hush, who was just standing there. He must be JACKED, because you can’t just clothesline someone off a motorbike going at full speed.

Batman takes out the police as a quick afterthought once Dr Freeze is defeated, and then flies off to try and find Hush – who has just been caught on camera trying to kill Spoiler. It looks like she has a trap in mind for him, though? Hard to tell, to be honest.

Under the Asylum, Bane and Alfred wreck some undead fools.

Once they’re all defeated, Bane looks at Alfred with a sense of actual pride. Aw, these two! Alfred asks Bane to clear some more rubble, which was blocking a dead end. As Bane gets annoyed about being taken down a dead end, Alfred suddenly squats down and recites a particular code… and GREEN MIST shoots out the wall and hits Bane in the face, knocking him out and leaving Alfred standing. It’s AMAZING. The wall moves aside to reveal a mini Bat-Cave, and Alfred steps over Bane’s body in order to get inside.

He gives his voice command and says hello to all his friends – to Batman, to Julia, and to Batwing, who is still trapped in the rubble somewhere and didn’t have a lucha wrestler to help him. You’re the man, Alfred.