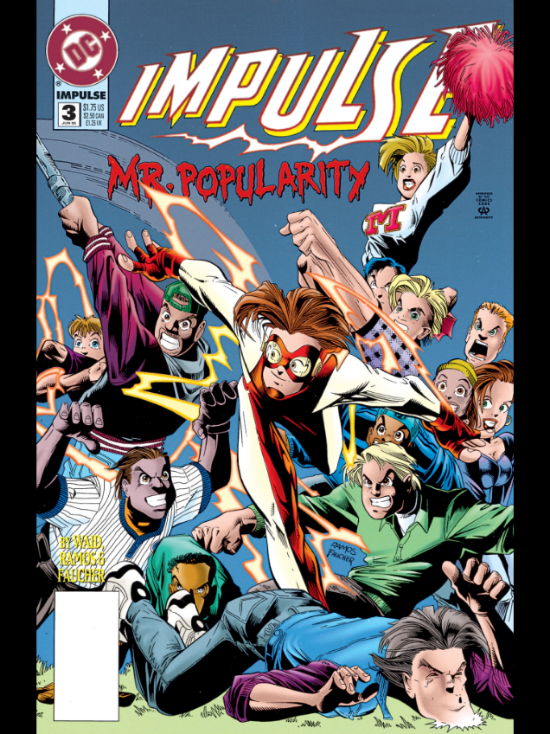 I’m not used to the idea of DC having fun characters. For me, the DC Universe has always been about awe and wonder, watching untouchable superheroes attempting incredible feats of godhood in the pursuit of justice. Wonder Woman, Batman and Superman, the trinity who pin the universe together, are all supreme beings in their own way, who carry not only the hopes of their world but also their ever-expanding traumas on their shoulders as they always, always march forwards into battle. They’re warriors and gods, powerful and unknown to the general public. They’re not like the heroes at Marvel, say, or Valiant – who are more grounded in humour, the layperson who exists for readers to relate to and empathise with. Not being (at present) a goddess, alien, or billionaire, it’s far more difficult to relate to the serious and important characters of DC than it is to relate to the same-tier characters over at Marvel.

That’s a very typical perspective on DC from a Marvel fan, and certainly nothing you haven’t heard before. It’s also, of course, hopelessly wrong, and mired by the way DC presents itself against the way that Marvel presents itself. Over at Marvel, buoyed by a cinematic universe filled with funny characters who sling one-liners more than punches, the comics universe is designed to appeal to fans of the layperson: Spider-Man, Wolverine and Iron Man are all funny characters in their own way. They have serious sides which get emphasised, but built into their characters are distinct senses of humour which come out at different times: some of the best aspects of the comics franchises are the way those sensibilities clash when the characters all show up together for a crossover.

By contrast, in recent years and since I started reading, DC haven’t promoted themselves as being the company to go-to if you want funny characters having fun adventures. They’re the company who push Year One, Watchmen (And its derisory spinoffs), The Death of Superman, and so on. Recent pushes for characters like Harley Quinn have proven popular, but the sense of humour in her series was gleefully grotesque rather than a celebratory: her purpose was always to leave readers just that little bit on-edge about her and what would happen next. Of course, now she’s in Heroes in Crisis, another edgelord event from the company which is trying to thrust more trauma into the character when clearly readers were enjoying her whimsy back when Palmiotti/Conner/Hardin were making her into a star a few years ago.

All of which is to say: DC’s approach is to promote themselves as important to the comics industry, rather than as fun entertainments for the comics industry. Largely speaking, anyway. They have more of an idea of their comics as being part of a larger “canon” than Marvel do, which is why they do so well in Top 100 Lists, say. They have Vertigo and heavily-promoted “important” comics like The Killing Joke, whereas Marvel have been far less robust in their approach to marketing their back-catalogue. So when I read Young Justice and it proved to be some of the Marvel-styled fun that I’ve never really been used to seeing in the DC Comics I’ve had promoted to me, it was a brilliant shock to the system. There’s space at DC not just for the Brian Michael Bendis who writes crime noir and gravitates towards journalists – but for the Brian Michael Bendis who writes teen characters with a brilliant sense of verve and joy. In particular, I absolutely loved Impulse, a teenage Flash character.

Kieran Shiach (formerly the greatest Impulse fan in comics and now supplanted) sent me a copy of Impulse #3, the character’s ongoing series from years ago. Impulse isn’t one of the comics that DC promote to new readers. It’s not the sort of comic that gets talked about that much, and it’s certainly not viewed by the company as being a priority or ongoing concern at this moment – but it was a comic I loved reading, with a character-type who felt so at odds with the serious tone of the DC Universe that a relatively new reader like myself find I wander into whenever I read a comic that the company have told me I should start with. You have to dive quite deep to get to the joy and humour in the DC Universe, but it’s well worth attempting.

By Mark Waid, Humberto Ramos, Wayne Faucher and Chris Eliopoulos, the issue sends the young superhero to school to experience a typical day in the American education system. The idea of Impulse is that he’s a fledgling teenage superhero from the future who travels back in time and is stuck in his past – our present – and has to try and get used to it. Because he’s a kid, it looks like he doesn’t really have much knowledge of the past, meaning he doesn’t have that much of an advantage on anyone else around him. Like any teenager, he has general ideas of what the past was, but not enough to help him in, say, a Geography test. Or to win the lottery. He has to do what normal teenagers do, and that means go to school. The man looking after Impulse tells him to go try and make a friend – that’s his mission.

What follows is essentially the blueprint for Ultimate Spider-Man, or any of the young and fun characters Marvel have placed on their highest pedestal. Impulse is whipsmart but also a brat: he’s a child, more than anything else, and his challenges and approach are different to the stylings of anyone else at DC. If Robin had a problem, he’d be likely to deal with it in a responsible fashion. He’d be smart about it, because that’s what Batman would do. The same is true for, say, the Teen Titans. They get handed adult problems, and deal with them like adults – but for Impulse, we get to see actual childhood problems handled with all the subtlety of someone who is actually still a child. And it’s really freeing, and entertaining. 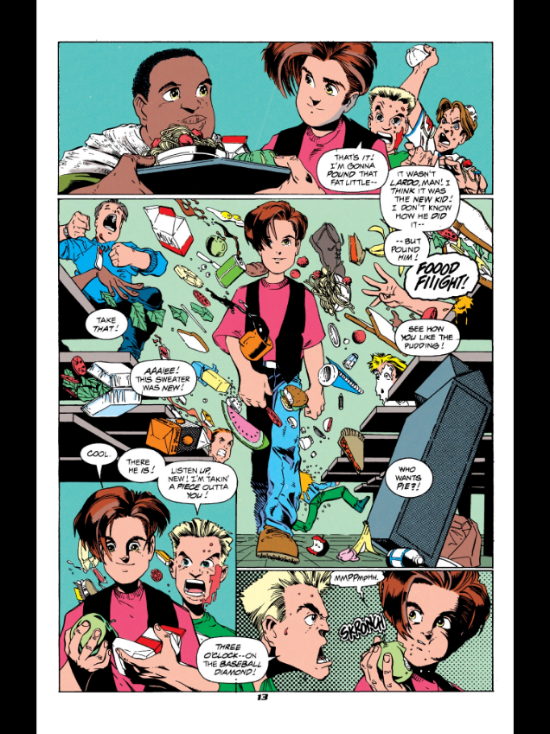 In the issue, Bart wanders through the school, without any cares for the norms and traditions of the schoolground. He doesn’t pay attention to the jocks, the nerds, the goths, the cheerleaders, because for him they’re all part of the hurdle he’s being force to jump over, rather than something he needs to interact with: he’s free from any of the trappings of the world around him, at least at this point in time, because he doesn’t care less. That’s why he’s called Impulse, I think.

So his lack of interest in the standard school conventions that he’s surrounded by play into the issue – his refusal to deal with anyone on any real terms leads every single bully to schedule an appointment round the back of the school for a beating. Having collected together every single threat and date from them, he leads everybody into the school playing field where their collective resentment turns them against each other and leaves the entire male contingent of the school basically in detention. He doesn’t have to throw a punch to defeat the entire school, and it’s absolutely brilliant fun – and a sign that I should probably be taking a few more left turns into DC’s past.

What struck me whilst reading Impulse is that there’s so much opportunity within DC’s Universe for the characters to act their age more often, and to be treated a little less like invulnerable demi-gods. There’s no need for all the attention to fall upon the important comics and characters – and perhaps, in fact, some of the sillier and more entertaining ones should actually be the ones to GET that treatment. There doesn’t seem to be any reason why Impulse shouldn’t be treated now in the same way people treat Ultimate Spider-Man. Part of it is DC’s focus on what comics they want to suggest to new readers, and part of it is the fact that I’m not trying hard enough to look past that focus. Whilst they’re busy talking up Mister Miracle and all those serious comics, there are all these hidden – fun – gems left in the back-catalogue.

With Young Justice now putting this style of comics-making and character-building back in the spotlight, my hope is that it not only starts to help DC shed their self-important skin moving forward: but perhaps it helps them to think twice about what comics they support when they look back into their past.