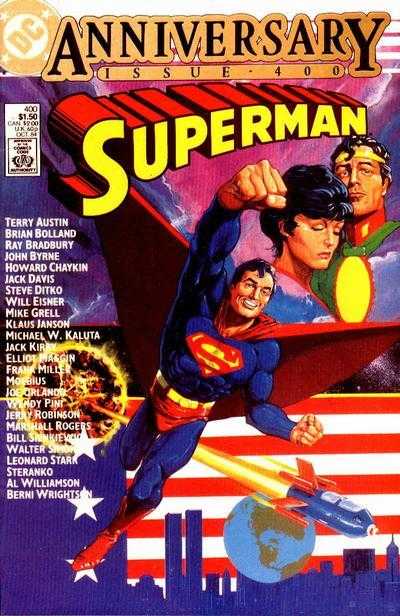 Another year, another December in which I’m writing about a DC anthology issue from the 1980s for Shelfdust. Like Christmas With The Superheroes, the anniversary 400th issue of Superman is one that had a formative effect on me when I read it, although at the time I’m sure I was too young to understand a lot of what it was doing. I still have the incredibly tattered copy I (or, rather, my dad) owned back then, although I’m not sure exactly when it was that it first came into my hands – certainly not the 1984 in which it was published, but probably no more than five years after that.

Superman #400 did something I’d never seen a comic do before – and something that, looking at it now in wider context I’m not sure any comic prior actually had – which was to base itself around the premise of superhero fiction as myth. Comics (and particularly Superman comics) had a proud tradition of “Imaginary Stories”, and it’s that tradition in which the anthology of Superman #400 certainly lives. But those stories didn’t have any life outside their own pages – the fact that they were apocryphal, mythological, wouldn’t have any wider resonance until people like Alan Moore and Grant Morrison would riff on them several decades later.

Yet The Living Legends of Superman, in showing us different perspectives on Superman within the DC universe from decades and centuries ahead in time, makes the character a myth within his own fictional context. None of the stories in Superman #400 are really about what happens to Superman (indeed, there’s only one that you could say features a correct and identifiable version of him) – they’re about what ordinary people think of him, and what he means to them. That’s always been an irresistible facet of the superhero genre for me (it’s what I think most of the best Spider-Man stories do, too), and I can probably trace that interest back to first reading this comic. 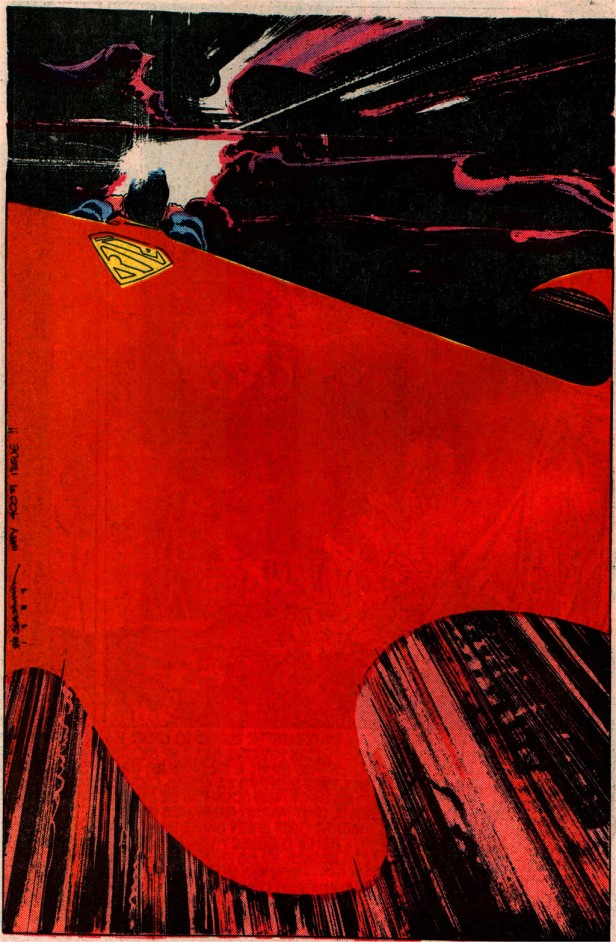 The issue is unusual for an anthology, in that although each story is drawn by a different artist, they’re all from the same writer (except the final chapter, which is both written and drawn by Jim Steranko – and as wonderful as it is to see him working on Superman, it’s also fair to say it’s the point at which the book becomes a teensy bit impenetrable). Elliot S! Maggin was a mainstay of Superman comics writing throughout the 1970s and early 1980s, although the fact that that’s an era in which the titles were largely at their historical weakest means that his legend is better served by his work on the character outside the medium – particularly his two novels, Last Son of Krypton and Miracle Monday.

But Superman #400 is his undoubted high point in comics, as he writes with wit and verve, tailoring each story to the artist (giving Frank Miller, incidentally, a chance to play with a TV screen-based aesthetic fully two years before The Dark Knight Returns). He’s the perfect choice for an issue like this, as his work on Superman had already played with the concept of the character as myth and legend – and indeed, he works concepts from his own Miracle Monday into one of the issue’s strongest stories.

The roster of artists gathered to draw the individual stories – including Miller, Marshall Rogers, Al Williamson and Joe Orlando – is strong. But where Superman #400 really stands out is in the range of pinup pages that litter the issue, with a quite incredible assortment of artists turning in iconic takes on the character. Some are or would become associated with the character – there’s an early John Byrne, a Kirby, a Bolland, and a quite incredible Bernie Wrightson piece with a very Reeve-ish Superman punching through a brick wall.

The real joy, though, is in seeing the creators who’d never usually be associated with Superman getting a crack. Moebius and Steve Ditko both give customarily graceful, lithe interpretations (although Ditko can’t help sneaking his politics into it a bit). Bill Sienkiewicz appears towards the end with an absolutely beautiful, dramatic and impressionistic flying shot. Cartoonists Jack Davis and Leonard Starr are in there. Oh, and there’s only Will Eisner, drawing Superman meeting the Spirit. Will bloody Eisner, in a Superman comic.

In considering my favourite single issues for the Top 100, there are many self-contained stories or chapters of an ongoing saga that have had more of an effect on me, or that I think say more about their characters or genre. But I couldn’t quite bring myself to put any of them above this, a single issue that is completely and utterly about the single issue anthology form, and which opened up my childhood self to the power of the superhero legend, and the possibilities that an individual comic could hold.

Seb Patrick is a writer and editor from Liverpool who has written for sites including CBR and Den of Geek, and works as the web editor for the official Red Dwarf website – a role he has held since 2011. You can find his personal website here, and he’s found on twitter right here.

Superman #400 was voted by critics as the 77th best comic book issue of all time! Read more about it here!