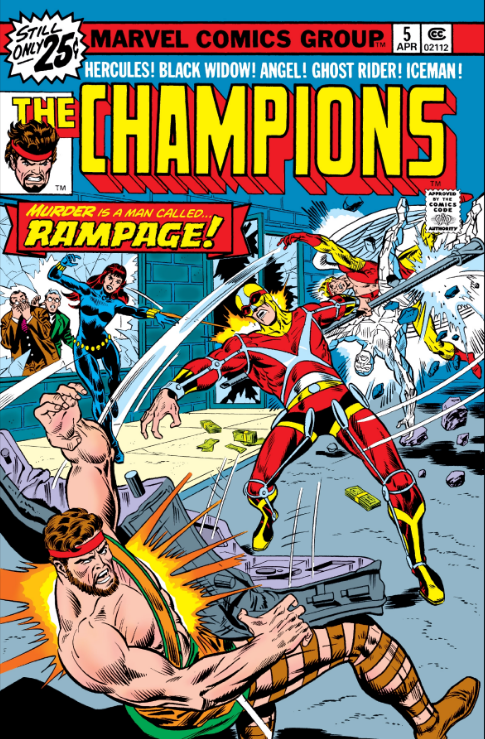 That’s definitely the second murder-themed title for The Champions in the space of two issues, which makes it a tiny bit of a shame they never tried to do a crime procedural series starring Hercules and Ghost Rider. I know that superheroes are popular, but can you imagine the joy of having Black Widow investigating a crime scene while Hercules tries to arm wrestle the coroner? There’s money to be made here, and I wonder why Marvel can’t give us just this one thing.

The alternate title for this issue is “These days the only way to get a dollar to go far is to toss it out of an airplane”, which is some Fiona Apple nonsense.

We start off in a legal agency, which is how you know we’re in for a real fun rollercoaster of a superhero adventure. Angel is talking to his financier about the family fortune, which is set to fall to him with the death of his parents. Angel’s never checked before how much he has in the bank – eesh, Angel, I check my account every fifteen minutes – and is astonished to find that he has “more money than god”. Iceman is also in the office, sat in one of the chairs, and wrecking it because he’s in his ice form. It’s just bad manners, mate. Angel celebrates by throwing all the legal papers in the air and yelling “I’m rich! I’m rich!”, which is definitely something you want to see from the ostensible hero of your story about the recession.

Speaking of: Stuart Clarke is having a bad day, because his company has gone under and he’s going to have to declare bankruptcy. Who would have guessed that “Clarke Futuristics” wouldn’t have had a long-term future? Clarke takes the news particularly badly, smashing the lawyer up against the wall, blaming him for the recession, and complaining about the Government. Hey, wait a second! This sounds like they’re putting POLITICS into my comics?! What is this, 2018 come early? Clarke – who is wearing a bright red suit and a green tie like a monster, fires his lawyer and storms out the office. He steps into the street and storms “I’ll find a way to pay them all back!” which nobody pays much attention to because this happens all the time in LA.

Nearby, Black Widow (who is wearing an orange tartan jacket over her superhero costume, #stronglook) is hanging out with Ivan, her mentor and possibly boyfriend? I’ve never worked out their dynamic, although he does call her “Tsarina” a lot which in the Marvel Universe is a Russian term of patronising endearment most often misused by Ursa Major. Ivan is pouting “like Gary Cooper in High Noon”, as pop culture maven Natasha Romanov notes. He’s upset that she wants to join The Champions team, because he thinks she’ll just get hurt. This is controlling behaviour, Ivan, and I expected better from you. Well, no I didn’t.

Black Widow points out that being in the X-Men stopped Iceman and Angel from ever getting individual growth, which feels like a specific dig at Chris Claremont. She thinks the team will work out great – but then again, she thought the same about dating Daredevil, so she has a history with this.

Hercules is being taught to play American Football by the college football team, which doesn’t go so well for the college football team. As he plays around, little does he know that Richard Fenston, the man who booked him to lecture at the uni, has just been fired. And that Hercules and Black Widow are both going to be fired from their roles at the facility too. Luckily Angel swoops in and literally picks up Fenster, forcing him to be The Champions’ business manager and sweeping him away on one of Iceman’s slides before Fenster can say “this isn’t consent”. 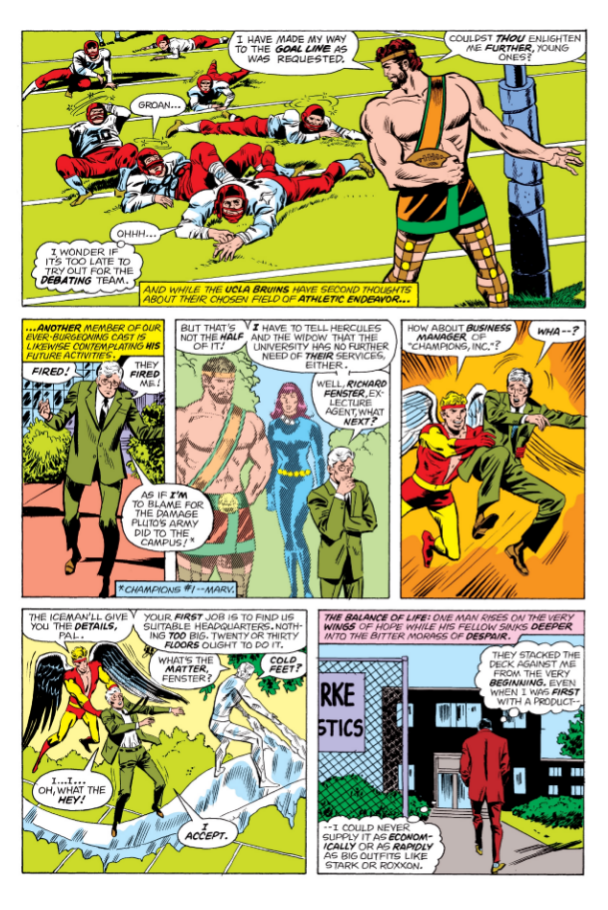 Anyway, back to Clarke, who decides to put on that superhero outfit he designed a few years ago but was never able to sell to anyone. He “smiles inwardly at the gut-level justice his scheme offers” before flying off in the suit to go steal money from the Federal Deposit Insurance Corporation, knowing the Government will cover the losses – and so he’ll get revenge on the Government for causing the recession?

Angel, Ivan, Black Widow and Hercules gather at a fancy bar to try and get The Champions off the ground, noting that Ghost Rider is AWOL (starring in his own ongoing series, which isn’t a great sign for the health of this comic’s ongoing future) and Hercules isn’t keen on being told what to do by mortals. So things are going well. Angel gives a passionate speech which steals “with great power comes great responsibility” from Peter Parker but does convince Hercules, who says “for the nonce, Hercules will join thee”. I have no idea what that means.

Iceman is walking round outside – presumably they leashed him up outside – but sees a robbery going on at the local bank. Of course, it’s Rampage, ripping out the bank vault. Iceman creates a jousting lance and races at him, but gets smacked in the face for his trouble. Rampage laughs off Iceman’s attacks and swats him with a lamppost. Literally, we get a “swat!” sound effect here. Before a second attack shatters Iceman, Angel flies in with the rescue, and Hercules hits him with a mighty, um, “clunch!” The lamppost gets a lengthier than expected starring role here, with the fight continuing around the post for several pages.

Hercules gets the best of the fight but then he starts flexing his muscles and posing like he’s in 1980s WWE, which gives Rampage the chance to “clubb” him and knock him out. Throughout the fight, Black Widow and Ivan are just stood there, doing commentary. Iceman, Hercules and Angel are all taken out in short succession, so Widow finally runs in to try and electrocute him – that doesn’t work, and Rampage yells “i haven’t come this far to be stopped by a mere woman!” so there’s that going against him too.

The fight keeps going back and forward until Rampage – who is meant to be a genius – realises he needs to do something different. So he grabs the unconscious Angel by the golden hair and takes him hostage. “If you come one step closer, I’ll smash this fist right through Angel’s skull!” he declares.