As Batman Eternal reaches a halfway point, the Bat-Family have reunited and everything seems to be basically sorted now. But no! It’s time for a reminisce through the life and times of Hush, to try and remind us that we’re meant to be scared of Batman’s least effective foe! It’s Batman Eternal #26. 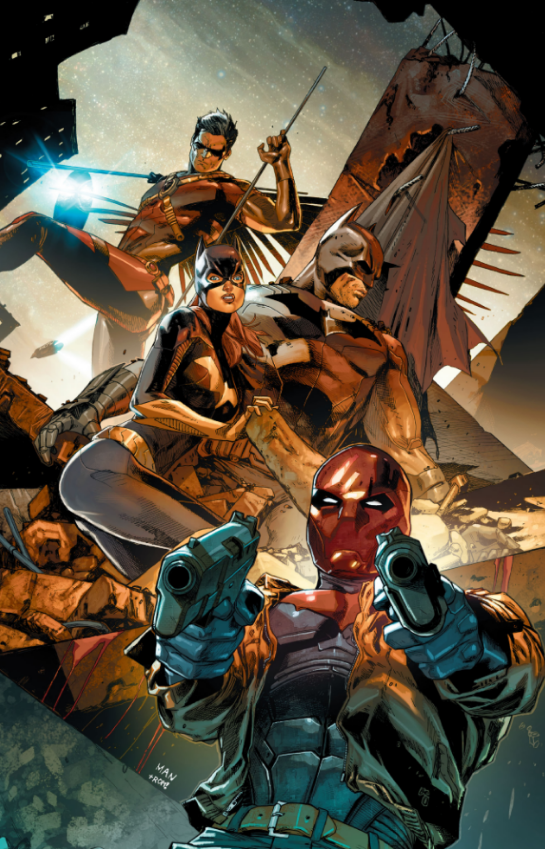 We’ve finally reached the halfway point, about a year after I started doing these. What a slog! But at least the story has improved a bit since it first started. We’ve been promised a healthy dose of Bat-Fam this issue, and so things kick off. Bruce is being operated on (shirtless, to show how he doesn’t even get goosebumps when its cold, what a hero) by Julia. Once the bare minimum possible has been done, he gets up to leave so he can fight some more, but is stopped by Red Hood, Red Robin, and Red Batgirl.

First of all, they want to know who Julia is – which makes Red Hood freak out at the thought of Alfred being someone’s biological dad rather than beleaguered surrogate. Batgirl tells him to grow up and calls him Jason, giving away his secret identity to Julia. She then shakes Julia’s hand. I imagine this was all some kind of set-up to have Julia and Batgirl start teaming up, but I don’t think that actually ever ended up happening.

Red Robin breaks down all the remaining issues, in case you thought the book had slowed down at this halfway point (which: in fairness, it had). They still have Jim in prison, riots in Gotham, the nanotech virus (remember that?) and Alfred’s injury. Remember, they don’t know that it was Hush yet, so they don’t realise half of them are actually already semi-solved mysteries at this point. Bruce admits it to them, though, which takes a toll on him. It’s tough to tell the truth, folks. Well done to Batman for being brave.

They decide that they’ll head out to stop the riots, while Batman goes to take out Hush. They cycle off on their bikes – conspicuous – and Batman and Julia are left with their mission.

Jason Bard, meanwhile, has just announced marshal law in the city, citing Batman’s failure to keep the city safe as his reason. Uh, aren’t you the police commissioner, Big Bard? He also announces a curfew, which upsets Stephanie, who likes to stay out late to play tig. At the moment she’s hiding on the top of a prison convoy heading to Kane County, for god knows what reason.

Batman and Julia check in on Alfred, who has started to grow stubble whilst in his coma. Batman reminisces about his childhood with Tommy Elliott – Hush – and Alfred watching over them. This section is done by Juan Ferreyra, working in a style which doesn’t suit him that well! It’s creepy though, so job well done as ever, Juan. We start with a scene where Tommy runs in to Bruce’s house, delighted that his parents just died in a car crash, because it makes them “the same!” As the Hush story reminded us, it was later revealed that Tommy engineered the crash himself.

At school we see Tommy start dressing like Bruce, pretending to hit on the same girls (there’s a fairly distinct vibe that Tynion is writing Tommy as being in love with Bruce, here) and trying to be him, basically. When Bruce rejects that, Tommy responds by whacking his head into a mirror, Twin Peaks-style, and ultimately then becoming Hush. It’s fine as a recap of the character, but it doesn’t exactly build him up as a huge threat, let alone one who is currently making Batman “afraid”. Ooof, don’t write that line into a comic! Batman never admits that!

Stephanie Brown was going to Kane in order to visit her dad. She dresses in the Spoiler costume and knocks out a guard on the way, which seems a little OTT. She could just walk in as herself, given that she’s Cluemaster’s daughter and all. She’d be allowed to. She smacks her dad in the face and announces she’s going to expose all his allies and ridicule him online. As she presses the button to send the message, though, her dad starts laughing – someone changed the post and she just posted a bounty on her own head?

Weird. He tells her to start running.

In Gotham we have Harper, Tim, Red Hood and Batgirl all fighting back the riots, whilst Bard and the police head out themselves. Batman monitors his screens looking for Hush, only for the final pages to reveal that Hush is back in his civilian identity as Doctor Elliott – and he’s just signed the paperwork to transfer Alfred to a different hospital.

To…. Arkham Asylum! Where Alfred is confronted by, sigh, Joker’s Daughter. And she’s got a crowbar.