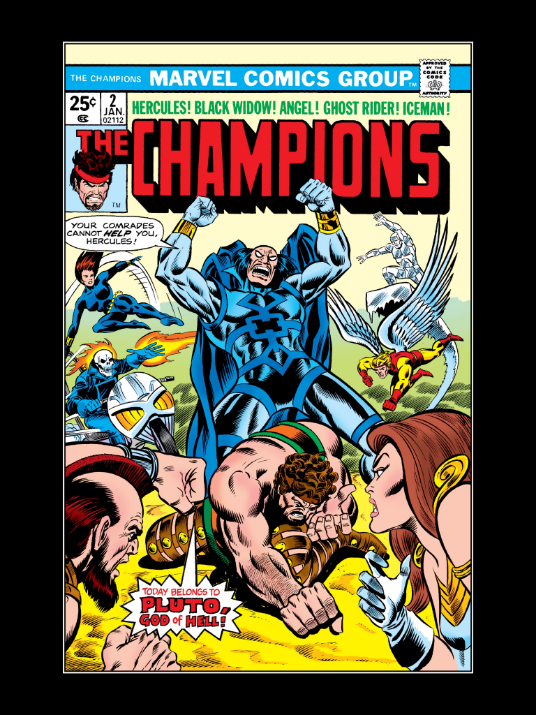 That eternal opponent of madness – Hercules, the Prince of Power, how do you do – starts off the second issue of The Champions by demanding “what madness is this?”

Whilst doing so, he’s flanked by two drop-out X-Men, a bored super-spy, a Greek Goddess using her Roman name so she can teach remedial subjects at University, and a motorbiking demon from hell. Yes, we’re back for more of this, because The Champions is an amazing comic and it’s time we celebrated it. Last issue the University was invaded by Harpies, Amazons and Cerberus as a precursor to the arrival of Pluto, Roman God of the Underworld, who in this circumstance is acting as a rogue vicar for hire. Will he be stopped?!

Zeus has apparently demanded that Hercules should marry Hippolyta, the Queen of the Amazons whilst Venus has to marry Ares, the God of War. If they refuse the marriages, the Universe will die somehow. Hercules is a bit miffed at all this, although Ghost Rider gives a thumbs-up to Angel like “so we can just go now, right? Leave the Gods to their wedding”. Hercules charges at Pluto but gets a cheap shot from Ares – some things never change. Hercules quickly turns the situation round, beats up Ares and throws him at Hipployta, which makes a “CHOOM” sound effect somehow.

He then turns his attention to Pluto, but gets put in a sleeper hold by the submissions expert lord of the dead. It turns out Hercules once signed an actual contract with Pluto which stated he would never be able to overpower him, which is why his punching is useless here. The rest of the soon-to-be Champions decide to try and outsmart Pluto, which begins with Angel and Ghost Rider running straight at him whilst yelling motivational speeches to themselves. They are taken out with a “FAAAAAK” sound effect, which you’d think would’ve been caught by the Comics Code Authority.

Of course, that’s a distraction so Venus and Widow can drag Hercules to safety, whilst Iceman seals up the portal with Pluto trapped on the other side. Alas, poor Pluto, will this ever be your fate? Hipployta and Ares are both still fully onboard with Pluto’s marriage plans, however, so the three of them decide to teleport over to see how Zeus is doing. On arrival we find out that Pluto has basically orchestrated a blackmail coup d’etat over the other Gods, forming an alliance with all the other Hell Gods (just like in Journey Into Mystery – don’t forget to check out my coverage of that series!) so he can intimidate Zeus into doing whatever his brother wants.

Zeus breaks a railing – common problem on Olympus – but acquiesces again to Pluto’s demands. We then find out that this is all a bit of an Arrested Development gambit, because it turns out that if Hercules and Venus are married to two of Pluto’s pals, they’d then be blocked from interfering should Pluto then decide to invade Olympus and claim it for himself. Pluto, being Pluto, announces all this whilst adopting a celebratory pose and standing about ten steps away from Zeus, which seems like the sort of thing Zeus should have been able to overhear.

Back on campus, the team regroup, with Iceman finding it quite hard to get over the fact he’s just been beaten up by some Greek Gods. He’s especially impressed that Ghost Rider took a point-blank hit and is still going – as Blaze heads back towards the main team, Hercules greets him as “mortal”, overlooking the whole flaming head deal. Ghost Rider, in return, calls him “Big Fella” and says all the various villains have now disappeared. Hercules responds by shaking his fist in the air and wondering what they’re up to. Just as a reminder: they have literally told him what they’re up to.

A dude called Huntsman then appears, who rides on a surfboard made out of flames (is this what would happen if Johnny ever got on the Silver Surfer’s board?) and throws a spear at them all. Venus and Hercules are immediately knocked out by this Greek kryptonite, but Ghost Rider… and Black Widow, weirdly, are immune. They beat up Huntsman and decide to go after Pluto. Ghost Rider, by far the most powerful member of this team, decides to stay and guard the Olympians, whilst the others head off. Black Widow asks if everyone is okay with her being leader, and Angel says “you’re a darned sight more attractive than the last team leader I worked with!”

Now: okay, that’s very rude on Angel’s part. But more confusing is that the text is asterixed and underneath we have Chris Claremont appearing in the narrative boxes to say “here, now!” How did Angel summon Chris Claremont’s narrative hand to appear?! Are we to presume Chris Claremont exists in spirit in all X-Men related titles, waiting for his chance to strike?

They track down Huntman, anyway, who raises a Titan called Mendetius to stop them, as one does. Naturally Iceman completely smacks the living hell out of this unholy monster (!) with relative ease, tripping it up with an ice slide without breaking a sweat. Although, being made of ice, I suppose he never breaks a sweat. The electricity melts the ice, but the titan can’t stand up because it’s so slippy – Black Widow rather smartly runs a conducting line into the puddle and electrocutes the creature, and in turn Huntsman is also electrified because his staff is made of Olympian wood… which is conductive, apparently. Handy!

Huntsman has a hissy fit and teleports them all away. Was he able to do that the whole time? Why did he waste his time with the titan?!

Anyway, Ghost Rider is bored as heck, because his sweet bike doesn’t come with radio. Luckily the trio of Pluto, Hippolyta and Ares come back, with Hippolyta saying “why is he looking at us so strangely?” as if it’s a natural occurrence to see two fully-armoured fiances jump out a magic portal. Maybe where Hippolyta’s from. Ghost Rider zaps them instantly, with Pluto barely able to call him a “jerk” before getting knocked out. Alas! It was a trick, as Huntman made the heroes look like the villains! The Champions are all knocked out (Huntman smacks Ghost Rider just as he starts getting into a really juicy “I murdered my friends!” soliloquy, but I’m sure there’ll be time for more of those later).

Iceman, Angel, Widow and Ghostie wake up later to find the Greeks have all gone. Iceman blames Johnny, which is fair, but Widow says there’s still time for them to save the day. As is common in these stories, however, the other characters have no hope or belief in her, and the issue ends with all four of them walking off sadly in different directions. Aw!

“There are many paths a man may take, and many the paths of others he will cross in a lifetime. But there are times when all paths seem to lead to but one destination. And when that destination is despair — something within the human soul dies”.

Is Tony Isabella okay, you guys?