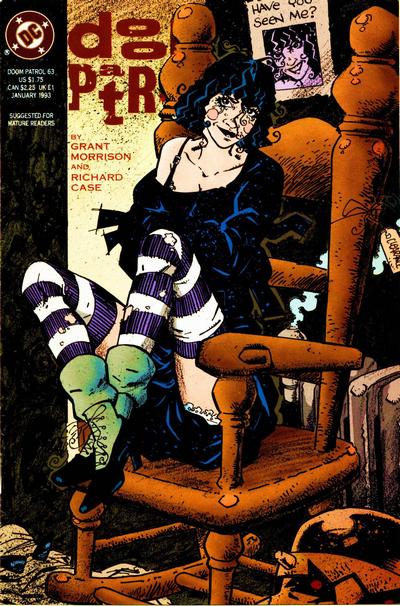 I don’t know if you noticed this or not, but this Grant Morrison seems to have some wacky ideas about the nature of fiction versus reality.

I kid because I love, but it’s a well they’ve gone back to a lot and the waters are getting a little stagnant. But before they were Grant Morrison the Brand™ they were Grant Morrison the Person, and two of their early works delving into metafiction felt, and still feel, fresh and interesting. They came out in the same general period, with one ramping up as the other ended. Animal Man, with Charles Truog on art and Brian Bolland on covers, had a minor superhero’s consciousness elevated to the point he started to glimpse our world. In the end, his own writer had to insert a fictional version of himself into the story to resolve the conflict. The story was called “Deus Ex Machina,” because in the words of Garth Marenghi, writers who use subtext are all cowards.

Doom Patrol, with Richard Case, mostly avoided such conceits, instead concerning itself with a revamp of the off-again, on-again superhero property that dated back to the 1960s. Since this was the late 80s and early 90s, Case and Morrison immediately took the book into edgier territory, at times making it into a full-fledged horror comic (the Scissormen are an anxiety dream made flesh) and other times delving into surreal dreamlike weirdness, such as a storyline where a famous comics advertisement tries to turn the Pentagon into a circle.

It didn’t really delve into metafiction, right up until it did – because after Truog and Morrison examined the horrors inflicted on a fictional reality by a real person inserted into it, in their final issue together Case and Morrison took the opposite approach: inflicting horrors upon a fictional person thrown into our universe.

“The Empire of Chairs” opens in the office of a psychiatrist name Marcia, who is in a contemplative mood. Marcia is thinking about a patient who she’s lost touch with, who was more than she appeared to be: Kay Challis, AKA Crazy Jane of the Doom Patrol, condemned to Hell by the Candlemaker – Hell being our world. She has to go save the Empire of Chairs from being destroyed by the Keysmiths, which is an obvious truth to us – to her doctors, it’s a debate between a revived interest in electro-shock therapy and a more conventional case of treating sexual abuse.

Jane is a character with what was called, at the time, multiple personality disorder, and is currently referred to as dissociative identity disorder, and the fact that she’s called Crazy Jane really drives it home: 2018 isn’t 1993. Our thinking on such things as mental illness has shifted, as it should in any healthy growing society, and while the conceit of Morrison is that art is immortal – and in its immortality, more alive than we are – it has the immortality of something trapped in amber. It can’t really change. What’s on the page stays on the page, a frozen artifact of its era, doomed to become progressively more embarrassing as the years roll on. Anyone looking to this comic for an up-to-date treatise on modern mental health care is headed towards disappointment.

I sympathize, because every time I see the word “hermaphrodite” used to describe the intersex Rebis,whose gender identity is best described as a shrug emoji, I can’t help but wonder if this is best left in the past. But this comic still speaks to me, and I know why. It’s because of Number None.

On Marcia’s wall is a painting of a chair that is eerily evocative of the debut of the villain Number None, and comics written by Morrison are nothing if not laden with symbols. It’s a chair, but to Jane, chairs aren’t just chairs. Sometimes they’re people fighting a painful war against the Keysmiths, rendered by Case and colorist Daniel Vozzo in a landscape popping with color… 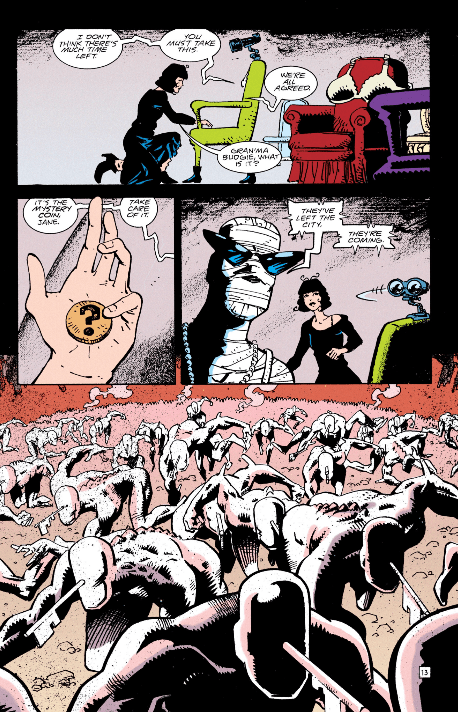 …and sometimes, they’re just a thing you sit on, as you explain very patiently, with great knowledge and training, that chairs are chairs and people are people and the only way they meet is if one of them sits on the other. In contrast to a land of colorful chairs, you live in a world where everything’s pale and quiet and normal – or ought to be, anyways. Sometimes a chair is just a chair.

And sometimes they’re Number None.

Number None is the villain who could be anywhere, be anything, and be anyone – and, this is key, has already been all those things. Number None is an abstract villain, the idea of villainy, the notion that there is something out there that’s making you miserable. Since Number None has been everyone, we all of us, in our own times, have been Number None, even when we haven’t wanted to be. We’ve been jailer and prisoner both.

Marcia in an openly queer woman in a profession where just being openly queer gets her side-eye from a man who probably still thinks, deep down, that homosexuality is a mental disorder. Her male colleague – presumably straight male colleague – insinuates that she’s incapable of being professional with a woman patient (but of course, he’s perfectly capable of doing so.) She finds herself in a prison, and wonders if her attempts to “cure” Jane ever really had a chance of helping her – if she even needed to be helped, really. If it was her that was wrong, instead of the world.

She describes herself as just another Keysmith – just another villain. Even though under other circumstances she’s a source of comfort and treatment, her time with Jane was her turn to be Number None.

In the end, her colleague gets his way, treating Jane with electro-shock therapy that dims the light in her eyes and sends her back out into the world. In contrast with her selves earlier integrating, implying reconciliation and acceptance, this time her other selves are killed by the Keysmiths, implying they’re something hideous that needs to be cut out of her.

The parallels to conversion therapy are uncomfortable – and conversion therapy is only ever a thing because people think of queerness as a mental illness, so perhaps the real question is, is it acceptable to use on the mentally ill – or on anyone? Are they even treating the right problem in Jane in the first place? Is it a problem that needs to be cured, or something to be managed? Could they even understand the problem, given how far outside their lived experience it is – and if not, isn’t that the definition of Hell, people hurting you and telling you they’re not?

The idea of being the odd one out, of having untidy and rough pieces of your personality, and being unsure what to do with them, that is why “The Empire of Chairs” resonates. Society put Jane in this position, and we are as much a part of it as we are hurt by it. It asks us to sympathize with Jane, and with Marcia, asking if we’ve ever been party to the oppression of others – to examine all the times we’ve been Number None.

And then, at the end of it all, in a handful of perfect panels…

…as along comes Cliff Steele to help her come in out of the rain. To show her that there’s a place she can be herself, unconditionally, and that someday that place might be a whole world – but for now, it’s enough that it exists, and it found her. Danny the World is a safe space.

“The Empire of Chairs” makes me cry every time, because in the end, Jane is believed. Marcia believes Jane when she is handed the Mystery Coin, but I believe that Marcia would have believed her regardless – that Jane gave her the coin because she believed. Cliff always believed in Jane, having crossed a universe to find her at her darkest moment. Jane always believed that the world wasn’t real to her and saw no way out, and her belief is rewarded. The story is about how powerful it is when you show someone a part of yourself, all full of jagged edges you don’t know what you want to do with, and you are believed. That you’re valid, and you’re loved, and it will save you.

They may be the World’s Strangest Superheroes, but they’re still superheroes. So, what else would they do but save people?

Charlotte Finn has written for several sites, including our old pal ComicsAlliance. She’s now writing primarily for her own site, including her current issue-by-issue walk through Astro City which I jealously read whilst wishing I could publish it on Shelfdust. You can find her on Twitter here!

Doom Patrol #63 was voted by critics as the 20th best comic book issue of all time! Read more about it here!

One thought on “There Is A Better World: Doom Patrol #63”