With Falcone and Penguin in jail, and evidence that Jim Gordon was framed, everything seems to be coming up Batman – but there’s a few twists coming! The first chapter of the series comes to an end as Alfred gets a visitor and Jason Bard… calls his mother! It’s Batman Eternal #21!

Things kick off with Vicki Vale very much breaking conflict of interest, greeting Jason Bard with some pretty full-on snogging as he arrives at her apartment. He’s been setting up some exclusive features for her – turns out he’s been promoted to be the new Commissioner. That’s not the biggest news of the day though, as James Gordon’s trial has come back with a verdict of “guilty”. He’s being sent down for a life sentence at Blackrock, which means he’s probably been sentenced for two weeks or so. People don’t last long at Blackrock.

Apart from famous gangsters, of course, and Rex Calabrese and Carmine Falcone have a friendly catch-up in their new cell together. Carmine is smug because he’s going to get out thanks to his connections, and apparently head off back to Hong Kong. If he’d seen the Dark Knight, he’s know it’s no safer there than it is in Gotham, but he doesn’t strike me as the cinephile type, I guess. Carmine says he’ll be back before he saunters out and and thanks Zorbatos for letting him have his moment of triumph, and she promptly attaches a chain to the back of his trousers so someone can haul him off way into the sky.

No it’s not “the chainster”, a villain idea I’m amazed we never saw appear on Gotham. It’s Batman, and he’s real upset at getting lied to by a professional gangster. He cries about feeling sad and betrayed, noting that Dr Falsario was just found dead, killed with a ceremonial knife from Hong Kong. Does that mean no Ra’s Al Ghul yet? Shame. The interesting bit is when Batman says he wants more answers from the man pulling all the strings – which is when Falcone starts laughing. It turns out he wasn’t responsible for this at all… he was given an anonymous invitation and decided to take up the offer and try to take advantage of it.

I suppose we do have thirty-one more issues left, so it was a little unlikely that Falcone would be the ‘big bad’. Maybe it’s going to be Clayface! Probably not.

At GCPD, Harvey Bullock stops by to congratulate Jason Bard on his success. He tells the kid to not try and step into Jim Gordon’s shoes, but instead to make his own shoes and go dancing with them instead. Weirdly eloquent from Harvey Bullock! Harvey gets all poetic about Gotham, so I guess Scott Snyder may have written part of this script, and then goes to wander off and, I dunno, read some Keats in a graveyard or something.

Batman shows up and makes fun of Bard, before saying “I don’t trust you” and promptly handing over all the evidence he has that Jim Gordon was framed. Um, Batman? Is that a great tactic? Before Bard can get his coat on, Batman’s already left – impressively he even took the time to close the window behind him, which is the sign of a true gentleman. I bet he cleans his shoes before he steps into a building, too. What a gentleman.

At the mansion, Alfred seems about ready to burst. He’s talking to Julia, who again is being a bit mean to him really. Clearly he wants to tell her all about the fact he works for Batman and is secretly a super-heroic butler, but his English sense of place is stopping him. One day Hugh Grant will turn 60 and he’ll make a perfect Alfred. Before he can tell her his secrets this time, though, somebody breaks into the house – and Alfred immediately goes to red alert. Julia says “the hell?” twice, which is a phrase comic book writers have collectively now willed into existence, before Alfred guides her to a secret room. 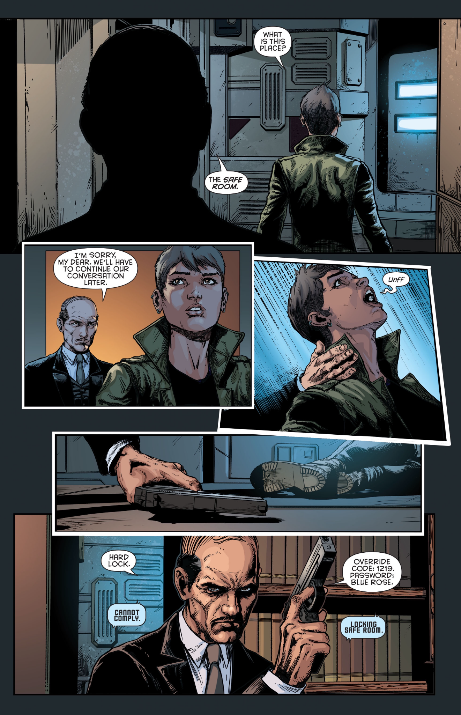 Julia steps in, takes a shocked look around, and then get KARATE-CHOPPED BY ALFRED. It’s awesome. He takes her out with one chop to the shoulder, picks up her gun, and then locks her into the safe room where nobody can hurt her. He then proceeds to go all Bruce Willis and head out after the mystery assailant. There’s a big long speech here when he threatens the invader, brags about his top-class training and amazing ability with guns, and also the time he was great in King Lear. Oh Alfred.

He shoots the front door, which is a bold strategy, only to immediately be caught off-guard by someone sneaking up behind him. He’s overpowers and caught in a sleeper hold, as his attacker pulls out that grim looking needle from the cover which is filled with green fear toxin. Ew. Who is the attacker?

Let’s move on from that disturbing moment. Next morning Jason Bard heads to Blackgate. Warden Zorbatos believes it’s to pick up Falcone – but Bard is actually after someone else entirely. Bard walks straight past Gordon without even acknowledging him (harsh) and stops off at a different cell. “The next phase of the plan is in motion” he says, signalling a plot twist: Jason Bard is one of the baddies! Oh, Harvey’s going to be inconsolable when he finds out.

Julia wakes up at the mansion and finds Alfred writhing on the floor in unimaginable pain. He manages to tell her to change the time on the clock before he passes out…

Back to Blackgate. If you saw the credits at the start of this post, you’ll have seen this is the first issue where Kyle Higgins joins the writing team, and now we get to see exactly why they asked him to come onboard. Jason Bard has come to free Zachary Gate, the villain from “Gates of Gotham” which Higgins and Snyder co-wrote together. Bard steps out the prison and picks up a call from Hush, who he refers to as “mother”. Ick.

Bard gets in his car, thoroughly in cahoots with the guy who just incapacitated the most powerful Butler in the Western Hemisphere. To seal the deal, he pulls out the USB stick which Batman gave him, and snaps it in half with his thumb. Ooooh, that Jason Bard is such a rotter!