Time to head to the sewers for a jolly old traumatic time for all! Bard and Batman are heading under the city streets to fish out a kidnapper, whilst over in Brazil we have a really grim storyline going on. All fun and games in Batman Eternal #18! 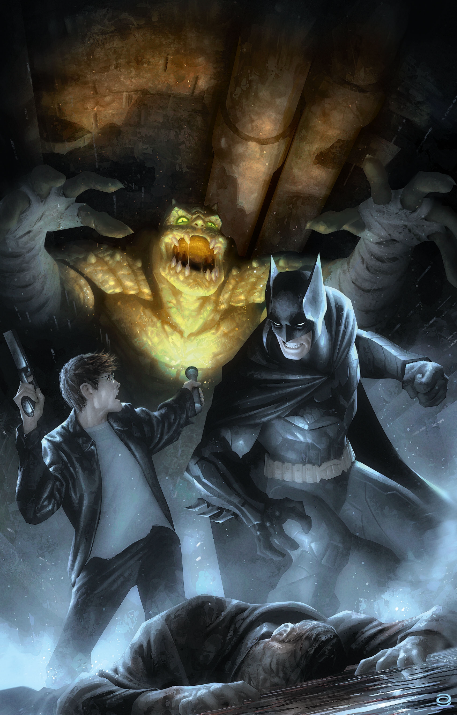 This issue of Batman Eternal starts with a scene of a young girl in the Rio favelas trudging through the mud, carrying a wheelbarrow of Batman knockoff toys she’s being forced to produce by gun-wielding captors. It’s brutal and horrible, and ends when Batgirl, Batwoman and Red Hood take out the kidnapper and offer a hand to help the girl back up. Red Hood, the only one to speak workable Portuguese, calls the girl a “little painted horse” when trying to comfort her, which is wrong but marks perhaps the first time anybody in American comics has correctly had Brazilian characters speak Portuguese rather than Spanish. Progress!

Back in Gotham, Jason Bard is going round the Bowery and introducing himself to people at random, which is a lot like how electioneering works in the UK. Batman is still stalking the guy, which at this point feels like more than just being careful. Give it seventeen more years and maybe Batman might start to feel a little more comfortable. Changing the subject, he asks how Julia is – turns out she’s snuck off to a gig nearby by some kind of Sex Pistols ripoff act. Well at least she likes the theatre just like dad.

Everybody is distracted by a random guy who runs past with a young girl on his back, who jumps down into the nearest… open sewer tunnel and disappears. I guess when half of Gotham are gainfully employed as subterranean minions for underground Batman villains, it saves time to just get rid of manhole covers entirely. Bard is about to follow, but gets startled by Batman walking up behind him. Bats jumps down, and Bard jumps down after, trying to impress his silent-walking hero pal.

While down there they quickly find a body, and Batman notes the person suffered from “mastication” which is apparently doctor code for somebody chewed off his bloody face. I’m so grossed out that doctors needed to invent that word. Bard, who is new here, immediately thinks this is because Killer Croc did it, which never turns out to be true ever in any Batman story – but which does lead Croc to show up and complain about getting profiled.

Batman eats a pretty tasty uppercut before Bard tries to kill Croc using an abandoned shoe he finds. Interesting tactic, Jason. Was that something they taught you in Star City? Ah, I’d be so good at ribbing Gotham police officers if only I were a fictional comic book character, you guys. Croc denies the charges and names the dead man and missing girl, which is pretty good evidence he’s not responsible for them ending up dead. Batman gets it, though – Croc is one of the best Batman antagonist, and it’s because he’s not actually a villain at heart, but only usually by circumstance. And so it proves here, as Batman convinces Croc to calm down and help them hunt down whoever the real killer is.

Speaking of false accusations, Jim Gordon is still hanging around in that there Blackgate. He’s having a shower by himself: apparently celebrity inmates get that courtesy. Falcone is up next, followed by Penguin. One of the guards leads Jim away and says nice things to him, which means that dude is super-dead by the end of this issue. Leo welcomes Gordon back to their little home. He goes on some sort of coded speech about tribalism, and we see some prisoners watering a bed of roses, presumably for Falcone. I can’t believe they don’t make this book a required part of our GCSE syllabus.

We quickly jump back to the sewer. Alfred asks if Batman needs any help trying down Croc, which is great because Bats is stood right next to the Crocular one. See? 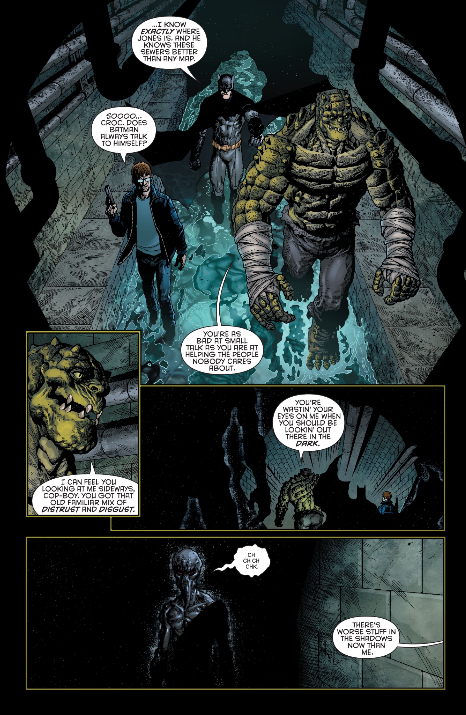 Croc is mostly concerned with belittling Bard, which is fine by me, and then it turns out there’s some kind of Ood-looking monster lurking in the shadows, waiting to strike at all three of then. Joy.

Back at the toy factory in Brazil, and Red Hood is basically the best character in the series at this point. He clearly wants to kill every guard in the place, and then he shows ultimate disrespect by calling Batwoman “B.W”. Oh Jason! You cad. He’s stopped from jumping in by Batgirl, though, who calls for a stealth attack. Batwoman agrees, and they go off to take out all the guards whilst Red Hood waits at the entrance and maybe catches up on some light reading. Because he’s Jason, he immediately breaks from this plan and starts pistol-whipping people right in front of Batwoman. Dude!

Batgirl breaks into the office of the guy in charge, and it turns out to be some dude with a horrific Hawaiian shirt and hypnosis powers, and he tells her to go turn on all her friends. He also has razor-sharp cheekbones, which is usually a sign you can’t trust somebody… in my opinion. While Red Hood (who has a crush, it seems) starts rhapsodising to Batwoman about how Batgirl is the best, most pure, and nicest person he’s ever met, he pauses and turns around.

Because obviously she’s now being mind-controlled and leaps at him from behind, intent on murdering both Hood and B.W. Oh, the irony. Somebody give this issue to the AQA, I feel an essay about thematic irony on the way!