Red Robin and Harper find some tentacle trouble in Toyko whilst Professor Pyg’s situation goes out the frying pan and into the fire. Corrigan and Batwing find greater horrors still in the Asylum, and there’s a whole bunch of severed arms everywhere. It’s Batman Eternal #16! 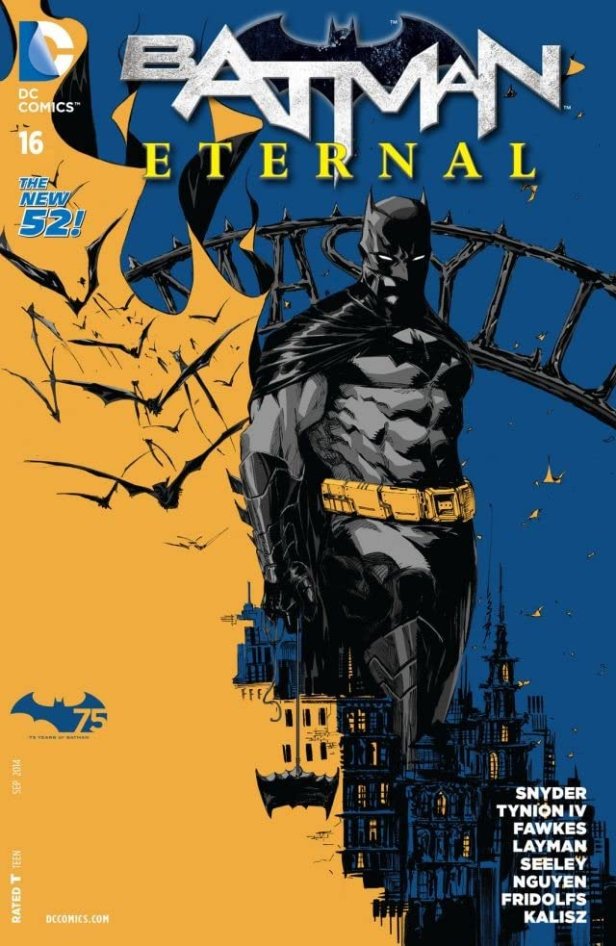 Mister Bygones turns out to be some kind of smoke monster thing; a former patient at Arkham who starts describing his backstory but not in any sort of coherent way. Something loving wife something something arm got cut off something baby girl. It’s not clear! But what is clear is that apparently he can turn your sorrows into smokey apparitions, so it’s not long before we have a bunch of ghostly Spectres lounging around, wagging their fingers at people – and, grossly, sticking three fingers into the chest of Corrigan to grab his heart.

Joker’s Daughter uses Batwing’s comms system to call Batman and claim that everything is fine, they’re all fine, how are you? Apparently she can do impressions, because Batman immediately buys it – even when she starts perving over how nice Batwing’s suit is. In fairness, Batman is still busy stalking Jason Bard, so he hasn’t got the time to question what’s going on at the Asylum. You see, Bard has been arresting criminals! Ooooh. He stops a criminal who pulls a gun by shooting the guy in the hand – if you like people violating forearms, this is the series for you.

Vicki Vale walks in and starts purring all over Jason, because she appreciates when somebody just randomly walks into a crime scene and starts causing trouble. He tries to fend her off, but she’s pretty into him, bless her.

At the Asylum, Magpie has woken up, and she and Professor Milo greet the arrival of the next inmate – Professor Pyg, who for some reason is still allowed to wear his mask. And suspenders! I bet there’s no way they’re allowed to wear suspenders at an Asylum. He gets turned over to the blatant criminals, anyway, and is led into the Asylum. As soon as you get past the reception room the place is a huge mess, which is a bit like my Aunt’s house. “Let me ride it!” Pyg shrieks, which is something I’m going to try and erase from my memory forever. A blue mist surrounds him, and we cut away.

In Tokyo, Red Robin is tracking down this Sergei dude when he gets attacked by a bunch of robot tentacles, which is an occupational hazard whenever you visit a fictional version of Japan written by white dudes. Tim stabs the tentacles with some kind of unexplained syringe, which seems to stop them. Somebody should get Spider-Man one of those. It turns out Sergei was responsible for the tentacles, no surprise there, although it is worth remembering that Sergei is a Russian scientist with no arms who has a pet monkey which has cyborg limbs. It’s important that you know that. He describes the tentacles as a test, which makes you wonder more about Batman’s earlier years when this guy was his mentor.

In the Asylum, things are looking really bad for Corrigan… until he decides they aren’t anymore, his sorrow ghosts all vanish, and he clocks Bygones in the space of three panels. Well! I guess that’s that, then. He handcuffs Bygones to a drain, which proves him to be better at the job than Batwing was, given last week Batwing just let Magpie do whatever she wanted.

Speaking of! Joker’s Daughter has Batwing tied to the wall using – oh no – a few ropes. That’ll definitely work. One panel later, he’s snapped the ropes and broken free, and asks Joker’s Daughter who the hell she is, which is fair. He’s also not very keen on anything about her, which makes me empathise and like Batwing most of all of the characters in this series. Go get ’em, Batwing! And in this case, that means go get Maxie Zeus, who has got his arm back (why did they cut it off) and has oiled himself up like he’s about to go wrestle for WWE. She calls him “the vessel”, and apparently feels “nothing”. Batwing’s first move after hearing that? He tries to use a taser on him. Okay, Batwing, you’ve dropped back down my list of favourites now. They keep fighting, and the tasers keep on failing to work – isn’t Maxie Zeus a thunder god or something? Batwing really needs to do his research – until Batwing decides to use the cord to choke out his opponent instead. That works!

Batwing wanders off an immediately gets lost in the tunnels whilst trying to find Corrigan. I have to say, the creepiness of these last two issues does really stand out and has been pretty good fun. Some more zombies grab Zeus and drag him off to be “prepared” whilst Batwing encounters an employee called Simon Ecks. The poor guy collapses as a ghost rips itself out of him and is about to take out Batwing when Corrigan resurfaces and sorts eveyrthing out. He knows what they’re up against, and is about to reveal it when…

When the villain decides to just jump in and reveal himself anyway. Nice try, Corrigan! Deacon Blackfire is back, he’s possessing the oily body of Maxie Zeus, and he’s got a zombie army. Okay, so maybe now actually WOULD be a good time to Spectre up?