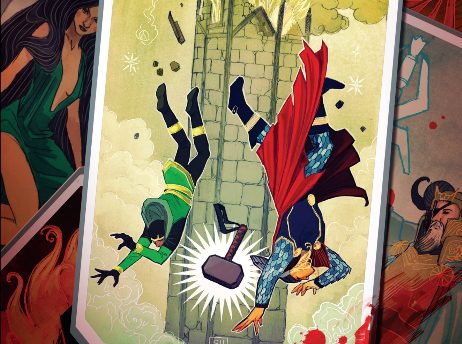 The Tower Card in Tarot can represent several things, but the foremost thing is brings is destruction and change. It shows a tower struck by lightning and in flames, as the occupants leap from the structure to an uncertain fate, and this usually signifies a break up of the established structure in your own life. Certainly that’s what it represents to Loki in this issue, which ends in unison with the finale of Fear Itself – the Serpent is stopped by at the cost of Thor’s life.

At the end of this issue of Journey into Mystery, Loki runs through what this will probably mean for him and merrily rattles off several new changes in the status quo which are going to leave him worse off. Primarily, that his brother has died, in spite and because of everything he’s done here. Working within the bounds of prophecy have tied Loki’s writing hands here, but his plan to defeat the Serpent at no point included a way to rescue his brother – Thor was always going to be collateral damage, it seems, and Loki is strangely accepting of the law of prophecy, even as we see that same law broken (and ignored, in one case) during the events of the issue.

One thing which notes this version of Loki out is that he’s willing to subvert laws and twist them for his own meaning – but he’s not likely to break them anymore. He’s not overtly doing anything to break his promises. As seen here with Surtur, who is released as promised but into the Dark Asgard rather than the regular Asgard, Loki is staying true to his word. The thing is, he’s being a lot more specific about his word than anyone else is able to, so they’re caught out by his ability to find alternate meanings where everyone else sees definition. Surtur is tricked, but is still more than happy to destroy Dark Asgard now he’s taken the trouble to get there.

Which means Surtur is now out there somewhere, and one of the greatest threats to Asgard is loose and free once more. Loki did it, and for good reasons, but his choice to stick to his word and keep some version of the promise he made… well, that’s going to have long-term ramifications for him. The old Loki would just lie and trick Surtur into some other kind of prison or limbo, but Kid Loki is more honest, and it’s a to a fault.

He’s also been showing his hand to an awful lot of people along the way, thus far. Surtur joins Mephisto on the list of deeply dangerous opponents who are now playing into the game against Loki, in exchange for the defeat of the Serpent. Perhaps the most notable player in the game, however – and you can see writer Kieron Gillen holding him just out of reach, but definitely teasing – is Ikol, the raven following Loki around. We get several hints here that Ikol may actually be the unseen narrator who has been unfolding Loki’s story over the last few issues, and we take several moments here to pause on Ikol.

If Ikol is indeed our narrator, then his smartest note here is comparing the nine steps Thor takes before succumbing to his wounds in battle to the nine steps taken by Loki’s team. Each of the team step into a portal to safety after completing their mission, and the comic takes opportunity to delve into each character a little as they do so. Tyr takes his step unthinkingly, as a hero would, but the Disir all take theirs with regret at the state their lives have become. The Destroyer takes two steps, because the written rules have to be obeyed, and the final count has to make nine, even if there’s a stretch being made in getting there.

Loki’s step is the plan as a whole, however. Having already gone through the portal, the narrator says that the final step for the team was Loki, seeing that his plan has been a success, on limited terms. Thor is dead, but the day is saved. As the narrator shows the nine steps taken by the team, it’s worth paying attention to the one member of Loki’s squad who doesn’t add to the count – it’s Ikol, who flies through the portal, and so his footstep isn’t left behind. The narration says “he is by a bird, and nothing else. Why would you think otherwise?”

Oh, and Loki’s plan, we should talk about that a little more. The book he gets his hands on seems to be the Serpent’s personal biography, as he adds in a paragraph within the enemy’s childhood. By doing so he adds Leah in as a character in the Serpent’s life, a figure who appears briefly whilst the Serpent is ill and offers him some kindness. The memory of her kindness is what gives him weakness in the present day, and allows Thor’s final blow in their battle to fell the Serpent and end the story. Loki writes in a retcon to the Serpent’s life, in other words: a concept which I’m sure we’re going to see revisited before this story is over.

For an event tie-in series, Journey Into Mystery managed to sneak round the edges of the central storyline and add some depth and edge to proceedings. As he notes when he rattles off all his new problems, one of the biggest is that he didn’t sign his name to the job: everybody thinks Thor defeated the Serpent by himself, and nobody knows that Loki was even involved there. Uh… apart from the Disir, Tyr, The Destroyer, Mephisto, Surtur and Ikol.