There was a period of time where decompression was the most popular style of storytelling in comics. The concept of decompression is that for comic books, time essentially has no meaning other than that given to the creative team. In other media, like film, time has to pass at the same rate it does for the audience. Even if a scene calls for time to be frozen, we still experience that frozen time in seconds, minutes, hours. Comics run only as quickly as someone can read pages, and decompression is the approach of stalling time right down and making the reader witness a scene unfold very slowly.

Two panels next to one another can have any amount of time pass between them. In a compressed comic, every panel has a condensed amount of time, so it feels like more is happening and that it is happening faster. In a decompressed comic, time is slowed right down. Perhaps in one panel somebody closes their eyes, then in the second panel they open them again. That was a blink, but by dedicating two panels to it we’re told that there’s some kind of weight to the sequencing.

It led to complaints from some who felt comics were being padded out in serial form – that decompression only works when you read a collected story, and short-changes readers if they’re reading month-to-month. Instead of a page which develops a story, you might have a page that develops a character instead, as they slowly over the course of several panels look around an area before the next page actually shows their reaction to what they see.

And then there’s something which cropped up in the Ultimate Universe, where decompression found a true home. The comics featured decompression, but the whole approach to the line was sometimes one of complete decompression within an overall work, which is fascinating and the sort of experiment which only Marvel or DC could afford to foist on their readers.

Alongside long runs like Ultimate Spider-Man and Ultimate X-Men, the Ultimate Universe featured a lot of miniseries over the course of its life, each one typically invested in one particular moment or idea. Nothing would change across the first few issues, other than a slow ramping up of some kind of tension, before a single panel or reveal in the final issue would explain the entire point of the miniseries for readers. It’d usually also explain the title of the series, which was usually “Ultimate _____”. Who is the “Ultimate Enemy”? What is the “Ultimate Mystery”? That sort of thing. Creative teams wouldn’t explain what was going on until the end, so readers had to collect the whole miniseries just to find out what the one final moment at the end would be.

Which is all fine. That’s how comics work. Any event series is about providing the reader with interesting spectacle until the creative team can reveal what their original pitch was in the final issue/the editorial team can set up their new reboot of the line. What interests me most is the fact that the Ultimate Universe predicated itself on the idea that there was something that needed to be revealed, and readers needed to know whatever it was. When you read, say, Secret Invasion, you already know what the invasion is, and the story isn’t based around what happens in the final issue (because in the final issue there’s a fight, the heroes basically win, the villains are defeated). But if you read Ultimate Nightmare, you’d practically being begged to ask what it is that Marvel have up their sleeve.

What is the “Ultimate Nightmare”? It’s Galactus, as revealed in a single panel right at the end of the miniseries. Or rather, it’s Gah Lak Tus, as it appears in the Ultimate Universe, which is a hive mind swarm of spaceships which never actually makes it that close to Earth and is driven off after not doing very much to threaten anybody beforehand. Ultimate Galactus is an interesting concept not given the page-space to give readers anything to get scared about, but that’s by-the-by and two whole miniseries away from issue #5 of Ultimate Nightmare, which names Galactus for the first time in the Ultimate Universe.

Until Galactus is named in the final issue of the miniseries, the story has no real indication that this is the goal of the story. We instead get a mysterious message, and two rival teams of superheroes investigating a lost Soviet bunker – complete with Ultimate Red Guardian, although no Ultimate Darkstar, probably for the best – from different ends. When they meet in the middle, they find out that Ultimate Vision crash-landed in Russia a century ago and was subsequently captured and used for experimentation. Vision was meant to be warning humankind of Galactus so they’d have 100 years to prepare, but instead they now have maybe a few months, if that. So that’s where the series ends up. 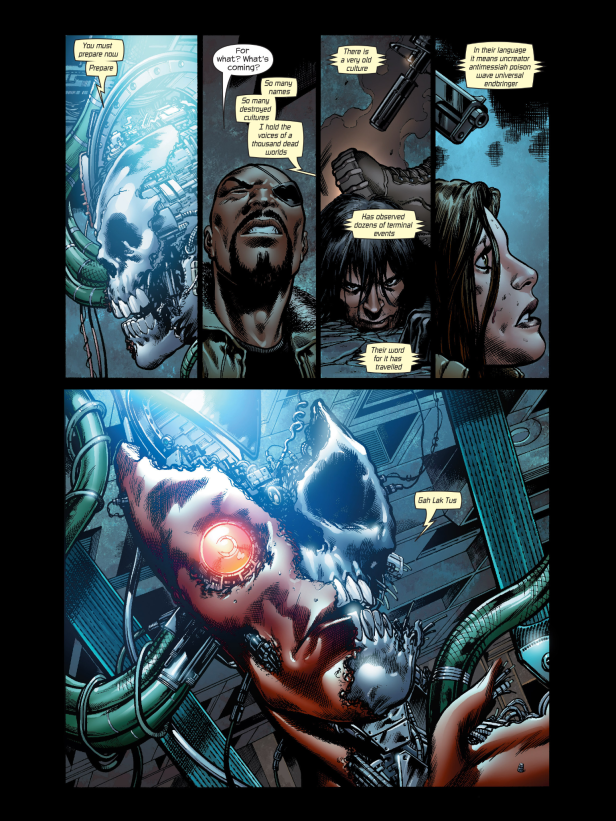 In a sense, that kinda makes the previous four issues set-up for one panel in this issue and two future miniseries. Everything was a decompression for that one moment. until the issue came out, the public had no idea that Galactus was even in the Ultimate Universe, let alone that Marvel intended to make him their next big threat. The subsequent miniseries, which was once again marketed by itself, was called Ultimate Secret – which was basically that the scientist introduced in the first issue was Ultimate Captain Marvel – and didn’t do much to move forward the Galactus story.

So I’m going to say that this was a specific experiment which resulted in ten comics being published before Marvel got to the point. They’ve admitted this, a little, in previous interviews, with the typically candid Ellis saying that the whole project was done to cover for Mark Millar not being well enough to write a planned event storyline for the Ultimate Universe. I’m not going to criticise Marvel for the plan, though. There’s sense in the concept, and Brian Michael Bendis and Rafa Sandoval pulled it off more successfully in the later “Ultimate Doomsday” trilogy. Having a concentrated and simple focus point in the final issue of a story allows the creative team to go anywhere they want in the meanwhile, and gives a sharper character-focus than if the plot meant anything important.

Ultimate Nightmare shows us the X-Men blindly running off to Russia because they think there’s a mutant there to save – only to find out that there’s more to the world than just their struggle. We have the Ultimates heading on the same mission but with the corrupted purpose that the Ultimate Universe gave to every SHIELD endeavour. Those four issues that might have been given over to an important narrative is instead given over to four issues of characters bickering, growing, and developing. Decompression is meant to be about slowing things right down, but Ultimate Nightmare represents an attempt to slow down an entire narrative into distinct miniseries, each one telling a very basic story which only has a small relevance to their overall ‘importance’ of the Ultimate Universe.

Ultimate Nightmare can be boiled down to “here is Ultimate Falcon. Galactus is coming”. Ultimate Secret is “here is Ultimate Carol Danvers and here is Ultimate Captain Marvel”. Ultimate Extinction is where the story – ultimately disappointing as it is – actually kicks in. It makes you think a little about what the purpose of superhero comics actually is. What are they trying to tell us? Every part of the first four issues of Ultimate Nightmare falls out of memory as soon as we find out about Ultimate Galactus. We thought that we were being shown a story about the militaristic underworld of the Ultimate Universe, but we were actually being set up for a last-minute twist that changes everything about what we should expect from the future of this line.

Maybe there’s something to be said for that. Maybe it’d be good to have more comics which aren’t actually about what we’re told they’re about. A few more comics that slow things down so much that we don’t realise we’re going in the wrong direction. I mean, I didn’t think Ultimate Nightmare was any good, god no, but the question is still a fun one to ask.