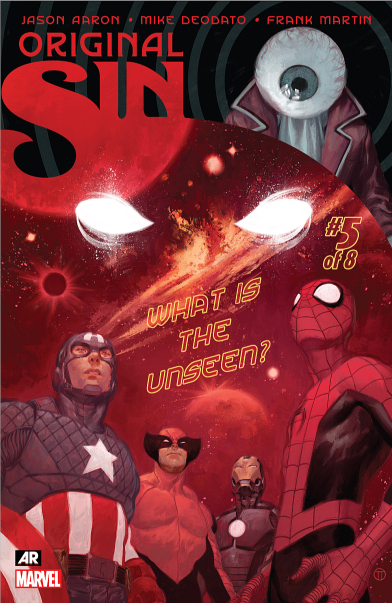 We’re heading back to 1958 the year my parents were born, and to Kansas, which is not where my parents were born. This was Nick Fury’s heyday, when he was in the trenches and inexplicably wearing a suit. Not pictured, of course: his cigars, which were removed from existence by Scarlet Witch during House of M. His interest, however, is not in the battlefield around him, but in the surprise arrival of aliens onto said battlefield.

It seems that the arrival of aliens – his own first contact, although with no sign of James Cromwell anywhere – was a bit of a gamechanger for young Nicholas. In a sequence I still don’t fully understand, an old guy in a rocket suit flies out and forces all the alien invaders back into whatever portal it was they came from, but gets impaled in the process and left to die.

He still gets some time to have a few last words, because drama is important, saying that he’s made peace with the bad things he’s done and that he’s ready to die. He asks if it was all worth it, which’d make more of an impact if we knew what exactly had just happened. He dies watching the portal fizzle out into nothing, which sees to inspire Fury.

The most 1950s man in comics history runs across to Fury, who pulls a gun on him – don’t trust anyone, Austin – possibly solely because the guy says “holy toledo” unironically. It’s revealed that the guy is actually Howard “guess who my son is” Stark, and the two men make a connection which I’m sure won’t lead to decades of daddy issues down the line. “Aliens can’t grow moustaches”, Howard claims, which is a bold statement to make.

Flying over to a secret mountain base – in that same flying car we saw destroyed for no reason earlier – Howard reveals that the army are using alien tech to equip and arm themselves. That the guy who just died was some kind of secret hero who goes around doing all the high-tech assassinations which stop alien threats from getting to Earth to begin with. They’re Minority Reporting people!

This is proved by a scene where Fury gives the job a test-drive, murdering some horse-type aliens that’re planning to destroy the Earth. He does so whilst wearing a gold suit, which is just the sort of gear you’d want from an intergalactic superspy, I guess. He goes on to continue to murder a bunch of people – including in alternate realities and under the surface of the Earth, revealing that he was also the man who killed all the creatures Ant Man has been crawling around in for the last few issues.

Apparently he’s been moonlighting – is that a pun? – this whole time as an assassin, nipping away from his job as leader of SHIELD in order to go murder a few people whenever required. Calling himself “the man of the wall”, it turns out that he only worked with his own LMDs, spending decades doing his semi-evil thing on top of his semi-good thing.

Seems that one time he almost shot Spider-Man, but chose not to because he had a hunch that Spidey might not be a bad person after all. Not entirely sure why that had to be included in his reminiscence – and let’s hope nobody ever tells Peter about that time he was almost murdered without having any awareness it was going to happen?

We also get to see him murder Fred. We miss you, Fred, and we love you. Float in peace.

Eventually he realised that he was being watched the whole time by Uatu, which puts a bit of a cramp in your whole swag when you’re trying to be an unnoticed spy and all. I think we might have an answer to the whole “who killed Uatu?” question now too, eh? It’s so Jeph Loeb, you know.

Anyway, after this light-as-a-feather issue and the fairly dull revelations that came through, we end with that final question. And Nick (who has been standing this whole time despite looking completely exhausted, well done there Nick) sighs, echoing everybody who just had to read this issue. I think we know who killed the Watcher, we know what happened to Nick Fury, now we just need to find out where that last eye is and I think we’ll all be set.

Wait, what’s that? Only five issues through an eight-part story, you say? Oh boy.