Justice League: No Justice is a four-part weekly series from DC which sees the Justice League, Teen Titans, Suicide Squad and, uh, the Titans assembled into a series of unexpected teams in the face of an oncoming massive threat of cosmic scale. Brainiac is the leader, Damian Wayne is the moral conscience, and there’s a big starfish thing hanging out too. Come along, friends, and hopefully at some point along the way somebody will explain why there are giant faces stuck in the source wall of the universe.

And that source wall returns, at last! The Green Lanterns are still out in space just where Chekov left them, wrapping some kind of groovy digital hug across the hole in the origin of all things, maan. John and Hal aren’t really sure what else to do to stop the multiverse from dying and you know if you leave it long enough you know it’s just going to come back, right? Grant Morrison will need to buy another house and that multiverse will be right back tomorrow. Alternatively: have you tried tying a tourniquet further down the wall somewhere? That usually stops the bleeding.

Green Arrow calls in to Hal to yell at him and let him know that hey – while you were busy saving the multiverse, HE was busy hiding under a blanket in the arctic, waiting to do a big dramatic reveal on Amanda Waller. Also oops there are four giant monsters called “Omega Titans” who are just about to eat Planet Earth, plz help. Ollie is still with Waller, and they’re still bickering, but now Amanda’s big plan is to get to the nearest prison so she can get more prisoners to do her work for her. One track mind, that Amanda.

Colu is destroyed, but all the heroes seem to have escaped by sneaking into a giant floating head spaceship. They evacuated the planet before it was destroyed, apparently, but it’s still a bit fresh that Colu just got eaten right in front of them – and that Starro got killed too. Poor ol’ Starro. Starfire and Flash are being empathetic, Superman is trying to fix things, Batman is being rude to Robin, Atom is contributing nothing with his presence, everybody’s doing their classic bits.

That includes Brainiac 2.0, who is mad about his dad – who he didn’t like – being killed by people who weren’t the Justice league. For that reason, he wants Earth to be destroyed and, well, who knows. He teleports off to go cause trouble and get some more planets eaten, the creep. As soon as he lands he zaps Supergirl with a gun he must’ve picked up down the back of Brainiac’s sofa. Bit uncalled for, eh?

He then makes it to Belle Reve, where Amanda was probably just about to start planting a bomb in Crazy Quilt, and prepares to shoot her as well. He does the whole Princess Bride bit “you killed me father, prepare to die”, etc, but then he gets a giant green fist in the side of his face and hey, the Green Lantern Corps are here now! All the humans except Kyle. I wonder where Kyle is? Dead, probably, knowing him.

Brainiac has off-panel attached tech to all four of the giant trees that just grew on Earth, and Amanda Waller decides she’s going to have to launch nuclear bombs at all of them in order to save the world. Would there even be a world left after that? She’s stopped, though, of course – the Justice League teleport back in! Batman’s team, at least, led by that tough-talkin’ antihero Beast Boy. The other teams are each stood by and ready to do more of that vague tree justice that failed last issue, but this time they have nuclear annihilation also floating over their head. Thankfully Green Arrow intervenes and persuades Waller to stand down, leaving Cyborg to do some tech gardening.

The plan is to rip out a seed and infect it with elements of all four trees, so the Omega Titans find it super-tasty – at which point they’ll launch it into the nearest one so his mates will eat him. He charges the seed with wisdom, then Wonder Woman charges it with wonder, Martian Manhunter charges it with mystery, and Lex Luthor charges it with entropy. Green Lantern loads the seed onto a crossbow, and Green Arrow fires the crossbow straight into the red coloured titan. Hurray that worked and oh god now everyone on Earth has to watch three Omega Titans eat their brother ew.

The heroes regroup, especially Etrigan who has had a busy four issues of doing nothing in particular. Then they head off towards their various new directions and greenlit miniseries. In stores soon! 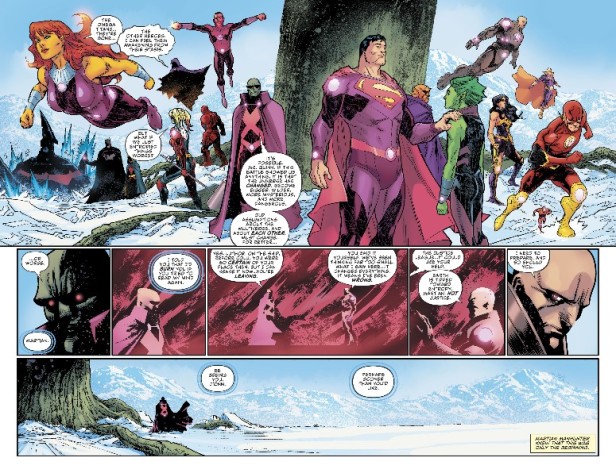 Batman employs Black Lightning to form a new Outsiders team and track down Amanda Waller, whilst Green Arrow is given a pretty box to look after. The Titans go off looking for new adventures, and Wonder Woman decides to form a mystery-solving detective team, perhaps annoyed she didn’t get to be on the cool mystery-solving team. Finally, The Justice League are reunited with Martian Manhunter in charge, and Hawkgirl – but not Hawkman, thank god – on the team. And Aquaman shows up! Nice of you to finally get out of bed, Arthur! The sea bed, that is.

As the Titans, Justice League and Wonder Woman Mystery Force all head out to go save the world, we’re given a new message from the creative team: New Justice.