Justice League: No Justice is a four-part weekly series from DC which sees the Justice League, Teen Titans, Suicide Squad and, uh, the Titans assembled into a series of unexpected teams in the face of an oncoming massive threat of cosmic scale. Brainiac is the leader, Damian Wayne is the moral conscience, and there’s a big starfish thing hanging out too. Come along, friends, and hopefully at some point along the way somebody will explain why Etrigan the Demon is apparently essential to this mission. 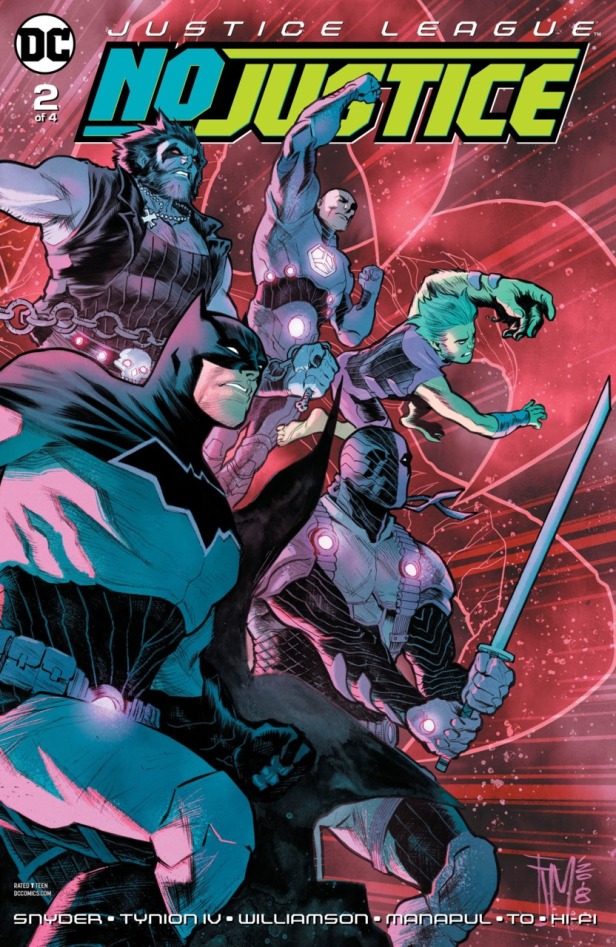 Amanda Waller is headed off for the Fortress of Solitude in her Wallermobile, and bickering with General Lane the whole way there. General Lane, who is Thunderbolt Ross with a more boring name and don’t let anybody tell you otherwise, wants to know why she’s headed there, and she’s refusing to tell him anything. She outtalks him, he lets her do what she wants, and may the circle never be unbroken. As she stops the W-Mob and heads out on her own, though, Green Arrow bursts up and confronts her.

He’s wearing a big white coat to keep his green self hidden, and I have to imagine he’s been camped out hiding in the snow for hours, maybe days. His big question: where is the Justice League?

Colu is the answer, being Brainiac’s homeworld. The Justice League have to stop one of those big titan guys from eating the planet, but the citizens seem more keen on beating the heroes up than the titans. They’re not big fans of Brainiac, perhaps understandably, and so they’ve got robots programmed to attack anything that looks like it works with him – which the Justice League, big Brainiac buttons on their outfits and all, now do. Superman has one on his crotch. Huh.

On top of the robots, who all go conveniently quiet as soon as the Leaguers need to have an extended chat with one another, there’s four giant big trees scattered round the planet, with each one named after one of the titans. They figure the best thing to do is… stop? the trees? and then see how that changes everything. Batman orders everybody to form up into their teams and take one tree each, but Luthor and Manhunter stop them – they need to form the teams that Brainiac dictated, rather than fall back into their familiar team-ups. They reluctantly agree, which is helpful because that’s the premise for this story. Phew!

On Earth, Waller and Green Arrow have a bit of banter before she overpowers him and tells him what’s going on with the whole Brainiac situation. They eventually decide that they’re both lone wolves, and the sensible thing for lone wolves to do is team up and save the day.

They each head to their allocated tree, a bit like I had to do when I was nine and we had a field trip at school to… the woods behind our school, where we had to learn what trees were or something. The four teams here have to find a way to ‘activate’ their tree though, like they have to solve the Tree of Mystery or be really dim in front of the Tree of Wisdom. Something like that. The citizens of Colu and their angry robots have completely vanished by this point, if you were wondering. 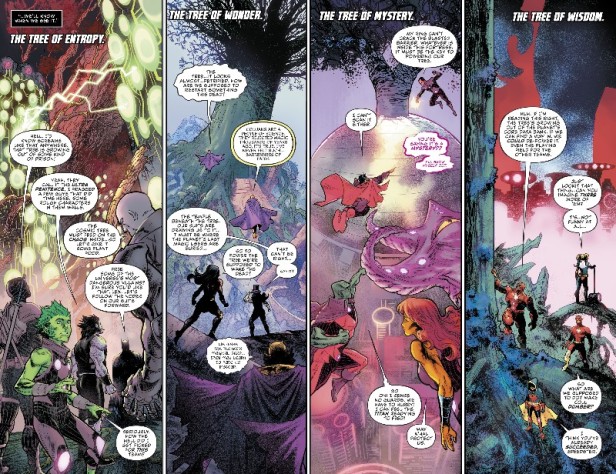 They all get attacked anyway though, by various ‘protectors’ or robots or ghosts or whatever that were just chilling out by each tree. Manhunter again stops everybody and asks them to think more logically, which is just the sort of pep talk you’re looking for when you’re trying to psychologically dislodge an elemental tree. It seems to work though, as Team Mystery find that their tree is housing thousands of ‘bottle cities’ like Kandor – the mystery is that they don’t know what will happen if they free all those cities, so that’s what they have to do to… stop the tree, I think.

Team Entropy decide that there’s an evil prisoner held at the heart of the tree, so this team of grizzled villains and antiheroes… turn to Beast Boy and ask him to please get really angry so he can do all the smashing and fighting and stuff for them. He starts smashing things up after turning into a big green lion feller, which Lobo seems to really respect and admire. I’m glad we found your floor, Lobo.

On Earth, Waller and Green Arrow find the ‘seed’ that Brainiac left there for them – but it’s already activated, and I think acting as a homing beacon for all the giant titans to come round and eat up Earth for a bit. Waller admits this might be a tiny bit on her because she got her psychics to kill Brainiac, which should be some comfort to Green Arrow in his dying moments.

Each of the four teams are pursuing their goal, although not every goal is particualrly clear at this point, but come up with some kind of problem. Cyborg can’t connect into the tech, Manhunter’s telepathy is being dampened, etc. This is possibly because someone is trying to stop them, or more likely because we’re coming up to the end of the issue and we need everybody to be in a place of peril so readers will pick up next week’s part of the story.

Beast Boy’s team get furthest on their mission, going so far as to uncover the prisoner held within their tree. It’s… some other version of Brainiac! He calls himself Brainiac 2.0, which is exactly what they’d call it if they ever did a CW show starring the character. He says they’re all doomed, etc, and their mission to do something to some enigmatic trees which will do something to some enigmatic giants who have some kind of enigmatic mission to eat the universe might not go so well. You didn’t need to be a Brainiac to tell me that! It does help though, I guess.