You can now hear me on the Fantasticast, doing my first-ever guest spot on a podcast! It was brilliant to get to talk about a classic comic with Steve and Andy — Marvel Two-In-One Annual #2, released in 1977.

Written and drawn by Jim Starlin with art finishes from Joe Rubenstein, this is the second part of a storyline called “Avengers Vs Thanos” which started off in Avengers Annual #7. And even though we talk for a whole bunch on the show, I have something more I want to say, so here’s a tie-in post! 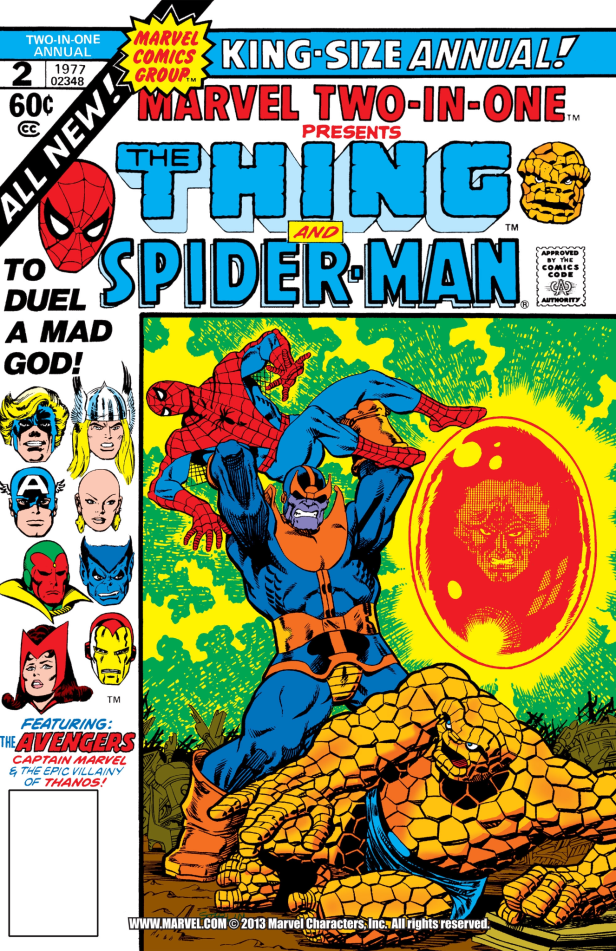 A majority of superhero comics like to bring in a huge overwhelming battle at some point, because it’s always nice to introduce fighty stakes into an issue. A problem I’ve had with fighting comics for a while, though, is that they don’t seem to retain any individuality, as a general rule. When a fight scene is performed on a screen, each character is actively doing something different, involving themselves in the battle in ways which speak uniquely to their character – ideally.

Comics struggle to do the same, it feels, and quite often you see characters take one of two positions on the panel: left, or right. And then they charge at each other and the artist attempts to convey madness of battle by putting the laser-firing characters in the corners so they can shoot at each other while the hand-to-hand fighters can pose as if ready to strike one another. So many ensemble superhero comics fall to this idea, where everything builds up to a stunning violence and then… the stunning violence turns out to be a lot less personal than the stakes suggest.

There’s an issue with comics presenting fight scenes as generic, without any thought to the narratives which led us to this stage. Writers and artists are far too keen to go “here’s a splash page of fighting” and then move onto the next thing, without showing us why these individual characters make up anything more than volume on the page.

Reading through Marvel Two-in-One Annual #2, however, one of the most enjoyable parts of Jim Starlin’s approach to superheroes is that he gives everyone a role which fits them. The issue has several fight scenes throughout, including scenes which could have just been left vs right aligned characters snarling across dead panel space at each other. Throughout, he ensures that instead we get to see the character of his characters through their actions.

In the issue leading up to this, he has four characters to play with: Thor, Iron Man, Adam Warlock and Captain Marvel. All four could run in and punch Thanos, their opponent, but instead Starlin splits them up into fallible individuals, and uses the valuable page space needed for fight sequences on illuminating more about the characters he has. 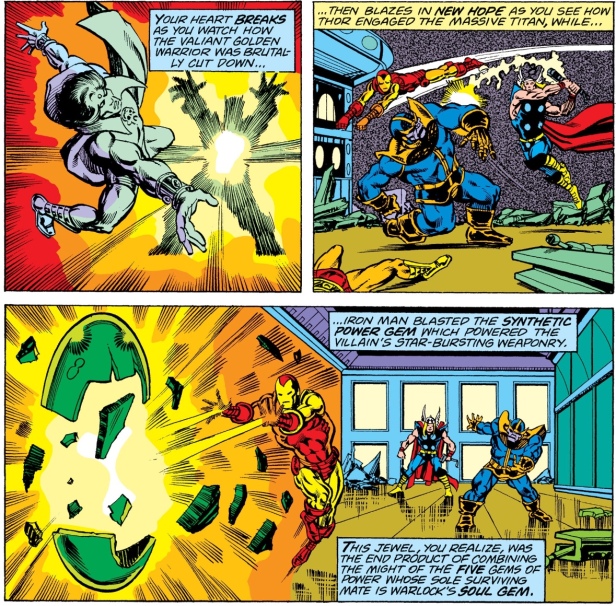 Marvel immediately sacrifices his body to stop the greater threat, whilst Warlock stalks Thanos warily, more interested in talking than throwing punches – and that fascination he has with Thanos leads to his apparent death. Thor then appears and flies straight at Thanos, hammer in hand – whilst Iron Man sneaks in round the side and quickly destroys the weapon giving Thanos his power. Four characters, four approaches, and four distinct impressions left on the reader.

This issue continues Starlin’s impressive – and I hope inspirational, because I’d love to see more of this happen – approach to choreography, if I can cheaply use that word. Here we have Spider-Man and The Thing fighting together against Thanos’ forces, and again we see Starlin take different routes for the two leads. In their opening battle against random guards working for Thanos, Starlin stridently points out that Spider-Man is focusing on the quicker enemies whilst Thing has gone straight after the biggest threat in the room. Spidey couldn’t beat the giant snake creature that Thing takes on – but likewise, Thing wouldn’t be able to catch the winged creatures which end up in Peter Parker’s web. 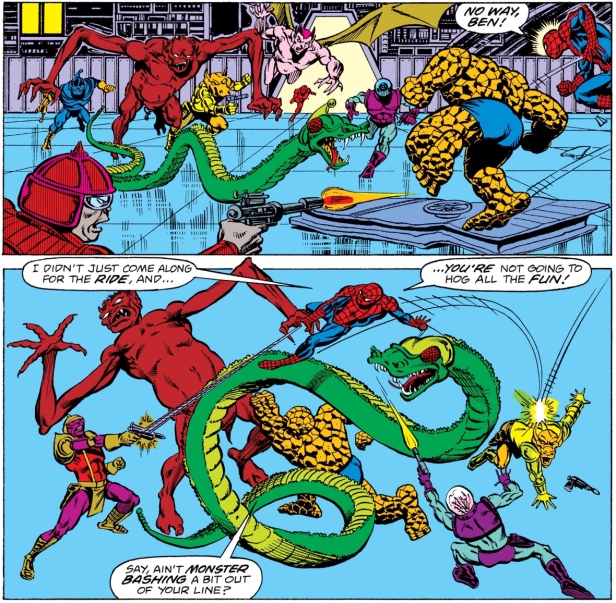 Later on, the pair face Thanos, who gloats at them from a balcony for an extended period of time. He’s gearing himself up to take out two heroes he doesn’t perceive as anything like a threat to his godlike status, which is in keeping with his character (and part of the early groundwork to the character’s undoing during Infinity Gauntlet, which follows on from this issue fairly directly). He’s enjoying himself hugely, while Spidey and Ben watch carefully, worried. Ben gets riled up more than Peter does, however, as they both react to threats against them in different ways.

Ben, who has quite a bit of experience with puffed-up gods disrespecting him, decides to take a direct approach. Waiting until he can throw in a good one-liner – because nothing is more effective against self-importance – he throws himself at Thanos in an act of bravery designed to inspire Spider-Man. It doesn’t work, however, and he’s quickly thrown to the ground. Spidey squares up to Thanos, panics, and scurries off – the one thing Thanos wasn’t expecting from one of his enemies. And that unpredictability leads Spider-Man to rescue the rest of the Avengers, because Peter Parker always succeeds most when he thinks before he acts.

Once the battle begins Starlin has access to a number of characters, but uses them in ways which fits them. Tellingly, his choice is to have Ben hold back Thanos’ arms so Thor can strike the titan using his hammer. Again, this was a time when big explosive punches would’ve been enough, but Starlin doesn’t see fight scenes as a chance to skip out on storytelling. They’re a part of superhero comics, and so he realises that the in-character choice for Ben Grimm is to have him work as a nullifer to Thanos, rather than a direct attacker. 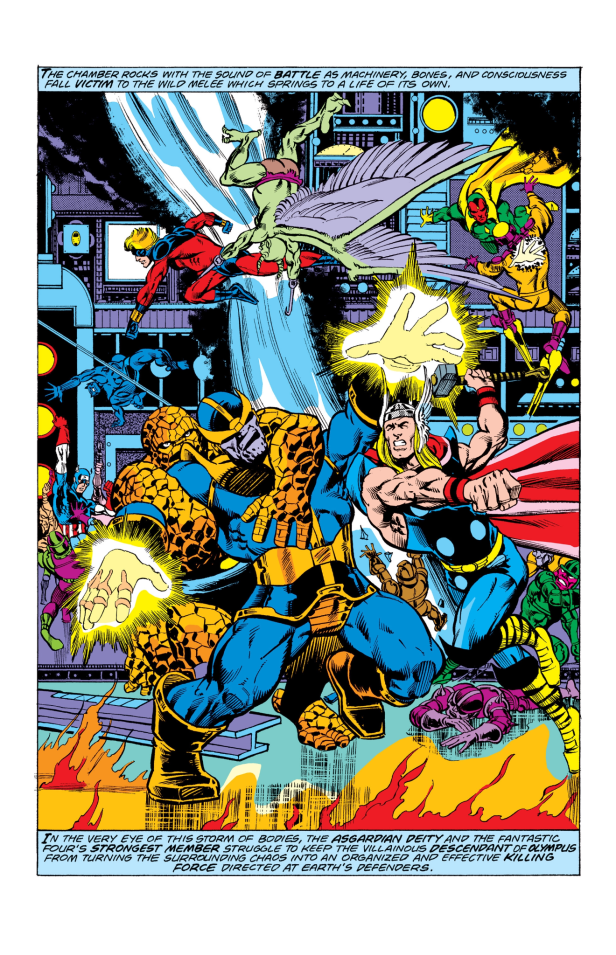 I mean, they do punch each other later, but Ben’s first deliberate choice is to hold back Thanos so Thor can get the punches in. And once again that leaves Thanos open to sneak attacks, as Spider-Man knocks over a random shiny which frees the spirit of Adam Warlock, allows Thanos to be defeated, etc.

It’s the climactic issue to a story which has featured a lot of different fight scenes, but each time Jim Starlin and team have used that page time as an opportunity. It’s one of the most striking parts of the issue, which stands as a terrifically stirring comic both by itself and as part of the greater narrative it fits into. It takes the time to think through its punches, and that makes it so much stronger than if it tried to simply rush the reader head-on. That’s the true merit of a smart fight sequence.