It’s time to start what might be the actual best single issue of this entire run! Batgirl is on a mission to Brazil whilst Stephanie Brown is busy discovering the joys of her local library. There’s telemovies, one-armed pull-ups, Teen Titans, scorpion-based assassins and the ‘familiar’ artistic stylings of Ian Bertram to enjoy – it’s Batman Eternal #11! Gotham City never looks more by itself than when Dave Stewart colours it, all gothic and windswept like Huddersfield on a fine summer’s day. Over at Gotham Cemetary a woman stands at a lone gravestone and picks up a letter waiting for her. Ripping it with a single open finger (demonstrating impressive finger muscles in the process) she starts reading – it’s a letter from her dad. Guessing this’ll be Catwoman, then, because she’s the only female character with daddy issues in Gotham. Stephanie Brown will need a night or two to sleep on it before she develops hers.

Things immediately jump to Brazil, where Batgirl has stormed the set of a television studio, causing the lead actor to faint from her sheer Batgirliness. She’s in the middle of kicking some random other extra, presumably on some kind of actor-hating impulse. Most people just cancel their Netflix subscription, Babs.

Oh, I joke! She’s actually chasing down the actor she saw at the Gotham subway, who decides to leg it before one of the two women fighting over him gets anywhere near him. The assassin Batgirl shouts out “you beautiful coward!” as he flees, which should let you know this is a Tim Seeley-written issue.

Batgirl gets the better of the fight and runs off – which prompts the assassin to put on some “protection” (I did tell you this was a Tim Seeley comic) which turns out to be some kind of giant living scorpion skin which crawls to her, climbs round her like a helmet/scarf combo, and makes her dribble green goo. Delightful.

Back at Wayne Manor, Alfred is trying to bond with his daughter through his most trusty trick – serving brunch to her. This technique works 99% of the time with Batman, but here his servitude falls on deaf ears, which incidentally are also in the middle of performing a one-armed pull-up. Julia isn’t interested in anything Alfred has to offer – not even his offer to cut the crusts off her sandwich, which in British society is second only to a knighthood – and tries to leave the house.

Alfred asks her to stay, but she criticises him for choosing to become a butler rather than stay a soldier. Poor Alfred. The stress of one-armed pull-ups, which I know right now I shall never experience myself, proves to have been too much too soon for her, however. She must have burst a stitch in the middle of her set, because she starts bleeding across the stairs.

At the local library, Stephanie Brown asks a woman with a severe haircut where she can find out more about Cluemaster. Amongst the books and clippings she’s given is a DVD of his time as the host of a cheesy TV quiz show. “Quizbowl” is the name, and this edition is a celebrity special with Bruce Wayne taking on Rick Pimento and London Leganza – neither of whom have ever been in a DC comic before, from what I can tell. Legenza is some kind of fashion designer, and plays up her cluelessness in a way which, no surprise, annoys the man who’ll later be known as the Cluemaster. After too many silly answers to his questions he snaps and yells at her on live TV, which presumably must have led to his firing.

Back in Brazil, Dominguez the actor races through the studio, only to work into some kind of art gallery where women are being painted. They both immediately get turned on by the sight of a famous actor in their presence, and their thirsty squeals act as a beacon for Batgirl. She drags him into a spare room and demands answers as to why he was in Gotham – but he says he was framed. Sort of. A doctor put steel insects on his face which were then used to create a perfect mask of his features, which is what was being worn by the man in the subway…. I think. Batgirl takes this news about as well as could be expected.

Alfred patches up Julia, who notes his ability as a medic. He takes the opportunity to drop the first hint that his work with Bruce Wayne isn’t as simple as might be expected, but we’ll have to wait a few more issues to find out if Julia takes the bait.

At the library, Stephanie picks together her dad’s life as a minor villain. Noting his poor choice to leave behind clues to his crimes in a city which is defended by the world’s greatest detective, her main revelation is the fact that she did once walk in on her dad being interrogated by Batman in their kitchen. At the time she waved this off as a dream (and Bertram abolutely nails that hazy dreamlike imagery in this sequence), but she now realises that it must have been real. She also realises that her dad used her as a defence – to ask Batman not to send him to Arkham, or she’d be left alone. It’s her harsh perspective, but it’s not like we’ve seen anything from Cluemaster’s actions which suggest she isn’t wrong.

Scorpion lady finds Batgirl and Gonzolo hiding away and has a surprisingly elaborate and literate speech lined up just for him – which ends with her calling Batgirl a cow. It’s mean, yes, but somewhat brilliant in the construction. She whips her scorpion headpiece thing at Batgirl, who smashes a window so she and the actor can escape. He is, well, somewhat reluctant. As they grapple away, he finds that he’s covered in insects and wriggles so much that Batgirl loses her grip.

Handily, he lands straight onto the top of a spaceship, which was just hanging around waiting for this to happen. Starfire is piloting, unexpectedly, and is told by her ‘handler’ to take the actor to a safe house. Meanwhile, scorpion lady is taken out by some bolas, revealed to have been thrown by The Batman of Argentina, El Gaucho. This issue is a gift, you guys.

Batgirl yells at the spaceship from a distance and even shakes her fist at it, which is the sort of amazing Batgirl content I think we all came here for. Red Hood shows himself and tells her that Gonzolo wasn’t in Gotham, just as the actor claimed not to be – and Batgirl could’ve fact-checked this ages ago if she’d been thinking properly. Red Hood knows a lot about not thinking through your decisions, it seems, and he’s going to teach her a thing or two. 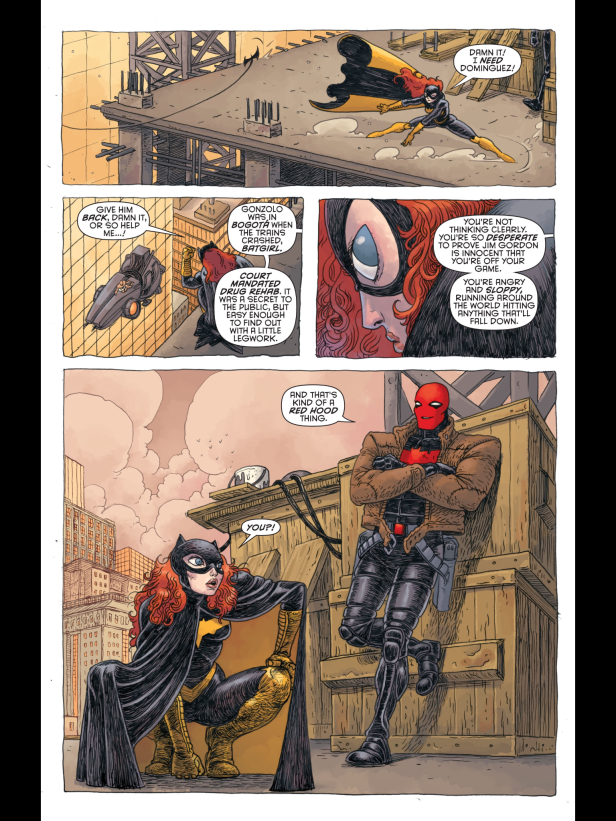 Batgirl takes this news about as well as could be expected.

The end of the issue takes us back to the cemetery, where Catwoman is reading the letter from her dad. It’s weird that he’s dead, because I’d always thought Carmine Falcone was meant to be her dad- but still. Dad asks for forgiveness in the letter, which Catwoman promptly burns because, well, daddy issues, as noted previously. Batman provides her the flame, and starts to poorly ask her if she needs any help. Catwoman quickly dismisses him and walks off, noting “I’ve never had a daddy. I sure as hell don’t need one now”.