In which the X-Men move to San Francisco to start a new lives for themselves. While Cyclops an the rest of the adult X-Men relax into a newfound life of celebrity worth, Pixie is the victim of a hate-attack from a new “Hellfire Cult” which shows that mutants still aren’t safe from prejudice and hatred. Also: Empath is back, and he’s doing submissive sex stuff with the Red Queen. 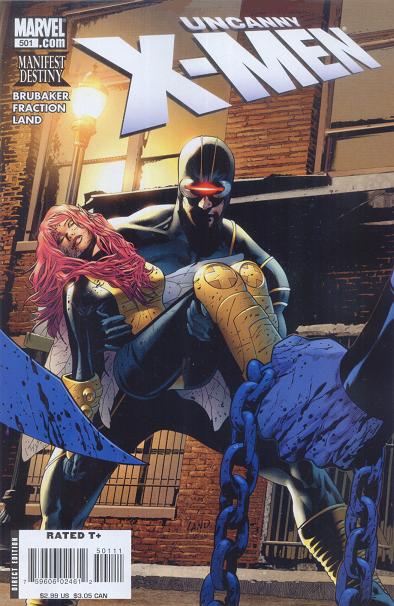 Although writing credits are shared between Matt Fraction and Ed Brubaker, it feels there are really only a few traces of Brubaker’s writing style present in the final issue. During his issues of Uncanny x-Men Brubaker was concerned with picking up bits of Chris Claremont’s work and toying with it in simple ways, engaging with the material only slightly and without a clear sense of the voice he brought to either his creator-owned voice or his run on Captain America. Here, though, things feel very clearly like Matt Fraction is behind the wheel of this particularly shiny, energy-efficient machine.

At this point the X-Men have arrived in San Francisco, where they’ll stay until Uncanny X-Men ends in forty-odd issues’ time. And it feels just like an advert for the city – aided by the insane levels of gloss afforded to Greg Land’s lightboxed artwork and Justin Ponsor’s artificial colours, long portions of the issue feel like an extended bout of product placement for items that don’t exist. Cyclops and Angel spend a lot of time gushing about their new cars, and shiny new home, pushing the idea of a fresh new start away from the horrors of their past. Here they’re celebrities: as they drive round in their new car together, they’re not objects of hatred or fear. They’re walking advertisements for a new lifestyle.

It’s very shallow, surprisingly so. There’s a connection to be made between the artifice of the modern-day X-Men in Fraction’s mind and the Danny Rand who appeared on those off issues of Immortal Iron Fist where Ed Brubaker wasn’t involved in the scripting process. There’s a performative aspect here, where the mutants aren’t just part of a minority group within society – they’re now part of a desirable and exotic future, who play up their (and the authors) progressive inclinations. Cyclops refers to his new home as a “sanctuary”, despite years of home invasions and violence in the past, and idly smiles his way through the issue. This is a new X-Men: an X-Men where the horrors of the past are to be blindly waved away so we can look to the ideological future instead.

The other characters are just as limited. Beast spends several panels rattling on about Hot Pockets for no real reason, while Karma’s unexpected appearance at the end of the issue comes complete with a two-word descriptor of “likes girls”. It doesn’t matter so much that she’s been a part of the X-Men for decades – her entire personality is boiled down to her sexuality. She’s a gay woman of colour, and that’ll look great when the X-Men put her on the front of their prospectus. Used as bait for a hate group committing assaults on mutants, she has just enough time to randomly sing the lyrics to Velvet Underground before the issue ends with Wolverine springing into action.

It brings up what feels like the core of this particular issue: the commodification of women. The issue brings in Karma because she’s a gay woman of colour – it’ll do the same with Psylocke later on in the run – and elsewhere the creative team feature three other women, all of whom are hopelessly, off-puttingly oversexualised. The villain here is Red Queen, who is now into some dominatrix stuff and appears dressed in leather and wielding a whip. Although she’s dominating over Empath, who acts as her minion for the story, she’s not given any agency of her own. Greg Land doesn’t allow that.

The issue starts with Pixie being assaulted by the hate group whilst coming home from a concert in town. For one thing, Land ages up the character (thought to be one of the youngest X-Men, and certainly underage) to be in her late teens and traces scenes from porn for the panels where she’s being beaten by the gang. When hit round the back of the head with a bat, Pixie’s expression is absolutely of a woman mid-orgasm, and it adds an unwanted sexual undercurrent to the assault. The writing calls for a horrible assault which then serves to clash against the glossy world Cyclops now thinks he lives in: Land does not deliver this as intended.

There’s still a sense that this could work, but the scene which follows the attack cuts the legs off anything Fraction might have tried here. Immediately after Land sexualises Pixie’s assault, we have an extended sequence where Emma models lingerie for Cyclops. Land obviously enjoys drawing this, but the unintended aspect of the sequence is that it ties Cyclops to the male violence of the previous sequence. There’s a panel while they’re talking where Cyclops simply demands Emma “turn around” so he can see her from behind. It’s so casual, and Emma complies so immediately, and both the Pixie scene and the Emma scene come off horribly because of their proximity to each other.

Number #501 was chosen at random by Katie Schenkel