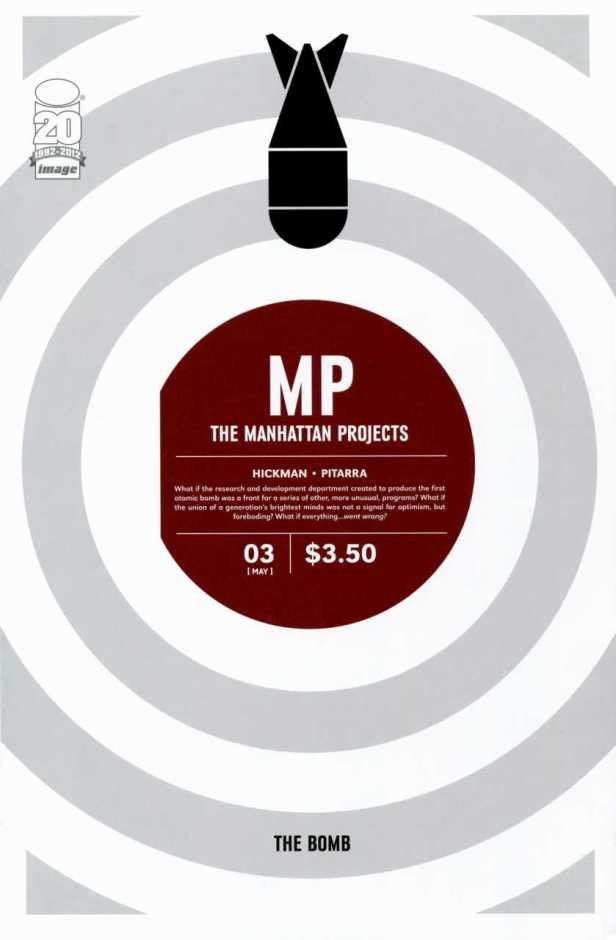 The Manhattan Project was centred around one central mission: developing the atomic bomb. And whilst The Manhattan Projects comic is ostensibly about this mission being a cover for so many other scientific experiments, the book did have to get round to developing the weapon eventually. What’s surprising, however, is that the development stage is left alone by the creative team in this third issue of the series – instead, they’re more interested in the sequence of events which led up to the bomb actually being dropped.

Tying further real-world events into the fiction of the series, President Roosevelt dies and is succeeded by Harry Truman, who in the series is shown to be a Freemason who yells in Latin and participates in animal sacrifices. Despite this change in power right at the top of American politics, however, the comic is very clear on one thing: Groves is the real power here, and his word is all that matters.

The issue suggests that idea that Groves sees himself as a God figure. In the opening flashback we see him as a child, being taught from an edition of the Bible, and being taught the concept that “nobody exceeds the reach of the righteous”. The idea seems to be that if you are right, then what you are doing is right, and therefore everything you do is right. However, the comic makes it clear that the characters are offering an alternate reading to the actual stated line of “what God fears is the righteous” – which would imply the exact opposite from the way Groves absorbs the message.

This then goes on to play a huge role in the very last two pages of the issue, when Groves ignores the command of his President and orders that the bomb be dropped in Japan. Far from the way in which the dualling Oppenheimers would seem to offer a defense of the real-world Oppenheimer assisting in building the bomb; this alt-version of Groves damns him as being thoroughly involved in one of the most horrific acts of mass-murder in recent recorded history. Because he believes he is righteous, he justifies himself in ignoring his chain of command and establishing a system where he is the leader of his own breakaway “shadow government” – he even takes the mind of his previous employer to place it into a subservient role to himself.

It’s also interesting for the comic to show Groves as being a religious man (or at least having a faith system of some kind in place). For all that Feynman, Einstein and Oppenheimer are pursuing the opportunity to advance science even if it compromises their particular code of ethics; Groves is completely uncompromised by his approach which uses science to promote his own agendas. The greatest project that the Manhattan Projects have created at this point in the run is a bomb, which Groves promptly drops on an country simply because he wants to, and believes he is infallible. Science is the foundation of the series, but faith maintains controlling power above it.

It’s easy to see faith as a motif which runs throughout this issue, especially as it features several examples of life after death amongst the cast. Not only do we have the evil twin Oppenheimer pretending to be his dead brother, but we have Roosevelt being brought back to life as the first example of artificial intelligence, and a sequence looking at scientist Harry Daghlian. Another real-life figure, Daghlian was killed following an experiment which went wrong and irradiated his body. He died just under a month after the incident, although the comic posits that he survived the radiation and instead became some kind of uranium-eating nuclear vampire.

With several characters having some kind of experience of life after death to their name, it’s perhaps not too hard to see why Groves could have developed a messiah complex. His long-term science project does seem to have led to a number of incidents which can be reinterpreted as being theological. Just as some feel climate change is an act of God being angry that gay people exist, so perhaps Grove might feel that his control over death therefore equates to the fact that he must be God.

There is also, of course, the obvious joke about how the comic is so interested in half-life.

Adding in the brief look we have of whatever the hell Truman’s activities as a Freemason are, there’s a clear idea that faith and belief system is set to play a huge role in how the comic moves forwards. There are only two characters who don’t appear to have revealed their true intentions yet. The first is Einstein who spends a third issue starting at the mysterious slab which has been a presence in the comic since the beginning. We don’t know what this is yet, or why it matters to him, but at this point it’s the only real unknown quantity within the series.

The second is Oppenheimer, whose interests are neither scientific nor rooted in an understandable concept of faith. We know he feels that he devours and absorbs the souls of everything he eats, but that’s a long leap away from how, say, Groves operates. Its with these questions that the series continues to drive interest from the readers, even after Groves orders the bombing of Japan.

So after three issues, The Manhattan Projects has now dropped the bomb, and its an immensely freeing moment for both the creative team and the series as a whole. The incident which the project was geared towards has come and gone, and we’re only a very short way into the series. In some more convoluted way you could argue that this is another example of second-life: we’ve seen the Manhattan Project complete its original mission statement, and anything that happens next is a step into the unknown.