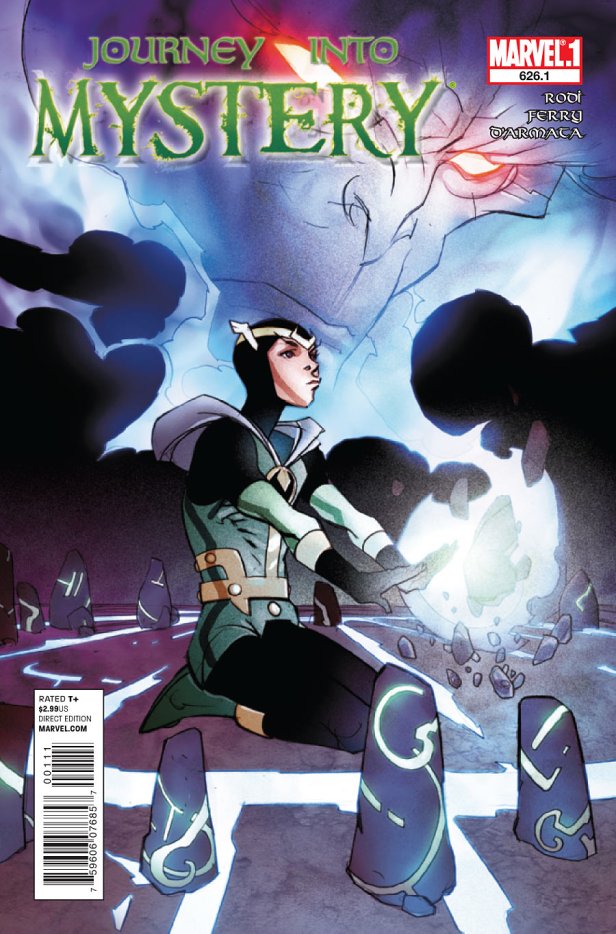 As if to emphasise one of the recurring themes of Journey into Mystery to date, this special 626.1 issue starts by announcing that it takes place between two panels of issue #622, four months ago. At the time, that page looked just like a regular part of the story, and there was nothing to indicate that anything important has happened between those two panels in particular. Journey Into Mystery is obsessed with omission, and here’s one of the first times we’re actually getting to see what was going on behind the scenes of the series, as we dive into the gutter and have a jolly nice thrash around.

Point One issues were an idea Marvel tried for a few years somewhere around 2011 and 2012. These were one-off stories which were essentially trying to offer readers an easy jump-on point to get an idea of the tone and story being cultivated in their many titles of the time. A point one issue typically had a bigger-name artist than the main series, with the writer staying on to maintain style and to offer a glimpse into what exactly what going on in the comic. The issues played around to various degrees – some offered one-and-done stories which acted as a showcase for the writing style, whilst others were pretty much just extra issues of the ongoing series, and impenetrable for the new readers they were meant to be attracting.

After only a few issues, Journey Into Mystery’s point one issue has an almost completely different creative team (Clayton Cowles stays on as letterer) and tells a story which is sort of comprehensible for new readers, but perhaps not something that would really get anybody interested in buying the main series unless they were already hooked. Through a magical summoning Loki spends the issue with a creature known as a ‘Teller’, who sees all. Loki’s reasoning for wanting to meet the Teller is that he wants to see what everybody else sees in him – he wants an idea of how he is perceived by the rest of Asgard.

Through seeing those perspectives, the issue looks to show us what kind of a story Journey Into Mystery is as a whole, and what kind of character this new Loki really is. It also serves as a good opportunity to bring in a group of known Asgardian characters and centre their thoughts into the storyline, to deepen the Norse territories of the Marvel Universe as a whole. Any excuse for some more Sif in our lives.

Having a different writer on the series in particular changes the way readers can view Loki, especially as the issue is trying to be an accessible jumping on point. With sequences showing the Warriors Three, Valkyrie, Sif, Odin and Heimdall all discussing Loki, blind to the fact that Loki is now watching them on supernatural catch-up TV, the issue has an opportunity to reshape the story and give us the outsider perspective which breaks the narrative away from the previous narrator’s version of events.

It only achieves this to some extent, but that extent is still fascinating, especially contrasted against the larger narrative. For one thing, what we see here is an Asgard which seems pretty set in their ways about Loki, but who all have their hands tied because of Thor’s connection with his brother. Sif and Valkyrie, in particular, spend their page time discussing Loki with a defeated attitude that suggests they already know how his latest return is going to conclude: badly. But they aren’t themselves able to do anything about it, because they know Thor will interfere and protect Loki – essentially they’re admitting to being supporting characters in this story, which is supported by Loki’s dismissal of them at the end of the sequence.

Odin and Heimdall have much the same conversation, disappointingly, with a similar conclusion that they won’t be able to do anything about removing Loki’s presence. With Odin presented previously as a scary, unpredictable force of nature, it’s a thorough anticlimax for this issue to suggest that he has his hands tied just as firmly as everyone else, and it seems to underserve the character to make him so much more rash and determined in his treatment of Thor in comparison to his treatment of Loki. Only a few issues ago he locked the God of Thunder in prison – there is really no reason to assume he couldn’t do the same to Loki if he really wished.

The Warriors Three have a more interesting conversation, as they unravel the cyclical inconsistencies which define Loki’s lifetime – and find themselves just as tied up in confusion as they were when they first attempting to unpick the situation. Here we see more of an idea of how Loki’s past self sowed chaos throughout his every action, backing across himself frequently to confuse the trail and make it impossible for the less dynamic characters – like the Warriors Three – to completely condemn him or ever redeem him. This is the conclusion which is brought up again in the two later segments with Sif and with Odin, which does slightly suggest that Rodi doesn’t have as much to say about Loki as might be expected.

That could be because he has less idea of what’s coming up next than Gillen, although the nature of a Point One issue means that there’s a lot needs to be crammed into an accessible jumping-on point – and perhaps that’s not really what Journey Into Mystery is able to offer at this point in time. After all, the book is wholly interested in slowly revealing secrets placed openly into the first few issues, and without any ability to know those secrets or reveal them, the creative team here have to instead resort to leaving Loki’s plan unspoken in order to focus on gossip and rumor instead. The audience for Journey Into Mystery is made up solely of people who’ve read Journey Into Mystery from the start – it’s not a comic to jump onto.

The issue wraps up with Loki deciding not to hear what his brother Thor has to say about him, perhaps cynically because it might be yet another retreat of the other three sequences in the book. When trying to leave, Loki dismisses the Teller offhandedly, which gets him in trouble as the creature attacks him and tries to steal his ‘fate’. It’s not certain what exactly that might mean, but it doesn’t feel like a particularly solid reading of Loki to suggest that he’d overlook a powerful creature when he could humour or flatter it. Loki isn’t complacent in Journey Into Mystery – even when he’s at his most chaotic, he has some understanding of just what he’s trying to do.

Luckily Thor shows up to literally dismiss the creature with a few words, at which point the brothers come to some kind of understanding with one another. Like much of the issue, it’s a fairly pat treatment of what should and could be a more complicated and confusing relationship. When the characters treat Loki like an endless mystery who’ll never be understood, it hurts the story for the narrative itself to be so simple and play into the good/bad dichotomy so neatly.

When shown what happened between the panels of an issue, we’re shown that… nothing of particular interest happened. That’s somewhat damaging to Journey Into Mystery as a whole, and it’s a worrying sign – the hope has to be that the regular creative team, on their return, can revive something more creative and unpredictable with the next few issues.

Want to read along with Shelfdust? Pick up the first collection of Journey Into Mystery through the Amazon link below – and you’ll be helping the site if you do, too!