Batman’s off to Hong Kong for a summer vacation, although sadly he seems to have forgotten his snorkel and sand shoes. It’s an issue fulled with burglars, crime lords, mobsters and ghost dragons, but Alfred’s the one hiding the biggest surprise of them all. It’s Batman Eternal #9! 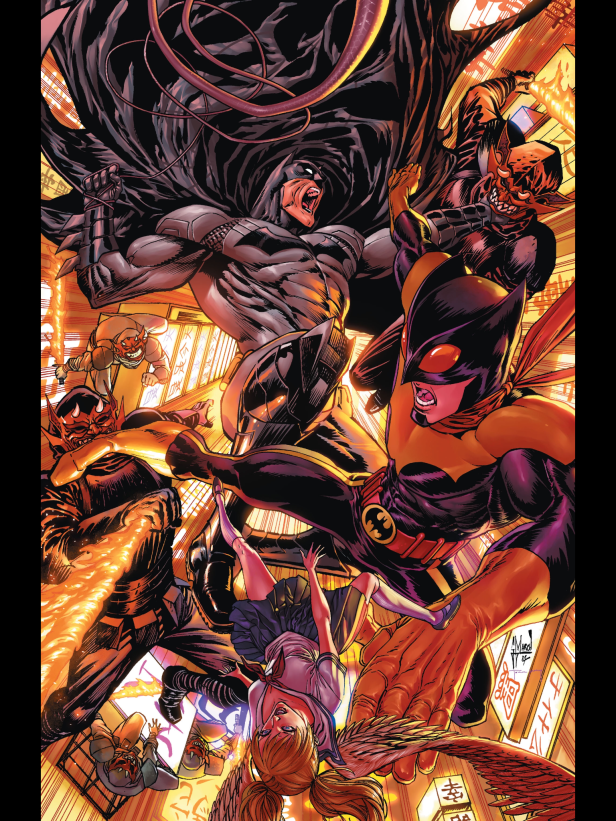 Commissioner Forbes heads off for the night, and straight into the nearest taxi. Perhaps looking at the car before getting in would have helped him, though, because it turns out that Roadrunner is sat inside, ready to kidnap him. Oh, and the taxi has a giant rocket boost strapped to the back of it, and these extended-out wheels with huge suspension to help out. The middle section of the car? Classic taxi. The rest of the car? Something out of Men in Black.

This seems to be the first continuity error within Batman Eternal, by my count, as we did just see Roadrunner get blown up by Professor Pyg a few issues ago. I guess we’re led to believe that he must’ve escaped or something because Pyg strapped an actual pig to the bomb – a pretty big clue that something was up. But still! Roadrunner was meant to be dead, it was a cliffhanger end to one of the issues, and it genuinely looks like somebody forgot to pass that note on somewhere down the line.

Anyway, Roadrunner delivers Forbes to Falcone, who is waiting for him underneath a bridge like they’re in an HBO drama or something. Falcone is upset that his men are still being shook down for money, beaten up, and left to be arrested – even though Forbes isn’t actually arresting them. But the problem here isn’t with Batman, who left for Hong Kong last issue, but instead with Catwoman. Falcone is now altering the agreement from “stop Batman” to “stop everybody in a cape” (except for, I guess, Gentleman Ghost).

Turns out Selina has been stealing from them over the last few days, prompting artist Guillem March to once more go absolutely crazy with the anatomy of his favourite character. Catwoman under March is made out of boobs and pipecleaners, with legs going off in seven directions at once whilst her boobs are distinctly bigger than her head. March has made a neat sideline is drawing a ridiculous Catwoman, and it’s simultaneously weird and (quietly) pretty great fun in its weirdness.

So now Forbes has two top priorities: the Cat and the Bat. It’s like the scene in Empire Strikes Back where Vader keeps changing the deal. Next we’ll be adding the Pyg to the list, as Falcone starts compiling a Noah’s Ark-style list of all the animal themed people who’ve been causing him bother. Given this is DC, that’s going to be quite the list. When Forbes tries to argue that they scared Batman out of town, so half the deal has been concluded, Falcone scoffs – of course Bats hasn’t been scared off by a few police officers. He’s somewhere else instead, probably.

That somewhere else being Hong Kong, where he’s already incurred the wrath of some angry people in demony-y masks. They’ve got flaming fire swords and, surprisingly the upper hand on him… until BATMAN OF JAPAN shows up! Hurray! I knew we could count on you, and your amazing sonar for Asia-based troubles. Now from what I’m aware of, which we can all agree is not much, Batman of Japan tends to fight mainly using moves referenced from Street Fighter, and that tradition continues with his uppercutting introduction right here. In a possibly unprecedented move, Batman thanks someone for helping him.

So it turns out that when Falcone left Gotham he moved to Hong Kong and started a gang war with someone called Shen Fang. Apparently Fang won that war, which is why Falcone moved back to Gotham. Sounds like Falcone is on a bit of a losing streak right now. Whilst they talk, the cat-burglar is watching and she says “bollocks” as a reminder that she definitely is quite quintessentially British. Also, I think she was only included because Guillem March pouted about not getting to draw any weird female legs otherwise.

As Jiro and Batman head to the roof of Wayne Industries in Hong Jong, they’re met by Kanaria, who was part of Final Crisis, as well as Master Hong, who definitely wasn’t. Apparently he just makes tea and reads prophecies from it all day, which is a bit like what my gran does while she’s waiting for Neighbours to start. There’s a Batcave inside the building with a Godzilla rather than a T-Rex, and a giant Japanese coin called a Kaikishōhō. No dead Robin costumes, although I suppose there’s still time for that.

Jiro uses the Bat-computer to reiterate everything he told Bruce a few pages ago, which seems a slight waste of time. Their next stop is Fang’s base, where they split up so Batman can head inside and track down the crime boss.

He’s beaten there by the cat-burglar, though, who has taken her mask off for reasons known only to her and kicks him in the face. Turns out she also wants to take down Fang, and is so angry that she isn’t going to let Batman help her. Sound familiar, Bats? Unfortunately that also means she then gets stabbed right through the back by Fang, who is a direct rip-off of Kingpin, only with a head tattoo of… I think a dragon? Maybe some calming waves. Hard to tell. 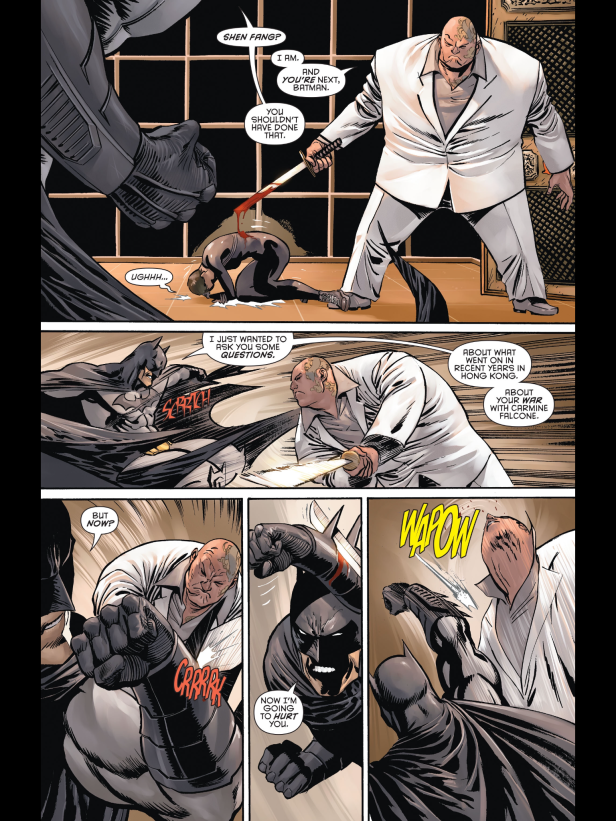 Batman goes into a fight with Fang, which ends with Fang saying “I’ll never talk” three panels before he talks. Classic Batmanning! The big reveal is that Fang didn’t win the war with Falcone – he just bought Falcone out and then pretended he’d won the war as a PR stunt sort of thing. Falcone is getting 60% of all the money that Fang’s gang are making, which is a pretty great business deal, really. Jiro walks in just in time to hear all this, and he makes the sorts of promises about this leading to “dishonour” that all white writers put in the mouths of their Asian characters.

Really, the big surprise is that the cat burglar is still unconscious on the floor after being stabbed through the chest – usually those sorts of people tend to vanish when you back is turned. Uh… in my experience. I’ve said too much.

Back in Gotham, the original cat burglar is sneaking her way into one of Falcone’s vaults. There’s a thin lil’ dude counting money out in front, and Selina basically bullies him into giving up the code to get into the vault itself. She then smacks his face into the table, breaking his glasses, which made me sad. You shouldn’t hit people with glasses! All he ever wanted to do was count money, his greatest hobby and keenest love. And now he can’t read what the notes say! This is some Twilight Zone nightmares right here.

It’s almost enough to make you cheer when Selina opens the vault door and straight into a trap, as Falcone and his men are waiting inside with a taser. Capturing her, he says that this is all about payback for the time she clawed his face and left deep scars in his cheek, and promises that her scars are going to be far worse.

There’s a bigger surprise coming, though, as Batman flies back home with the burglar stowed away on the plane. He gets on comms and tells Alfred that he’s bringing the girl back home to stay at Wayne Manor, which Alfred is pretty confused by. Why take in a “stray”, he says, forgetting that this exact same “stray” thing happens at least once every three years and it usually results in some new teenager out on the streets, practising their vigilantism. This is what you do, Alfred! This is your thing!