Vicki Vale is on the prowl again, which can only mean it’s time for us to check back in on everybody’s favourite bizarre journalist! Will she get the taser out again? Will she perform some more of that ‘real’ journalism that we’ve all been dying out for? Or will she engage in creepy bants with the least likely member of the supporting cast? It’s Batman Eternal #8! 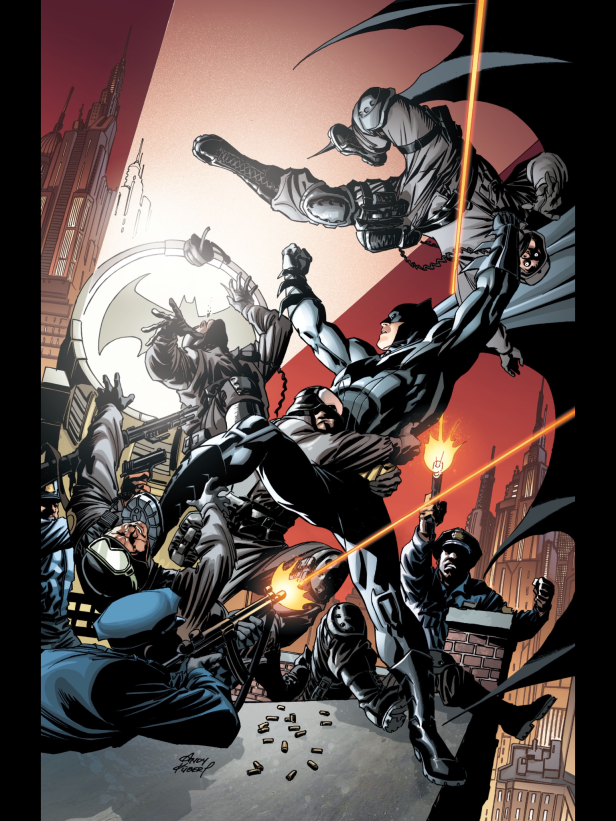 We start at the bottom of Gotham Harbour, which is not a location I’ve given much thought to before. Gotham is technically an island, I think, which is why Batman has an underwater section in the Batcave where he can race out in his Batsub or Batjetski or whatever comes to mind. So of course Gotham would have a harbour, but it seems such a shame not to get more use out of it more often. Especially as we now know that the place has wild penguins, killer whales and elephant seals just casually out on the loose, possibly all of them having been bred to develop a taste for human blood.

I wanted to start on that note for you this week: penguins with a taste for human blood.

Despite the chance of random penguin attack, a group of divers are heading to the bottom of the harbour, looking for the remains of the Iceberg Lounge – and most specifically, the vault. Before they have a chance, though, Bats shows up in his Bat… sled? And presumably mows them down or something. He’s been very busy on this front recently it seems, with a montage showing Batman rolling round Gotham, busting up the various criminals who’ve robbed from the Penguin.

Which is a strange decision actually, because he knows that by doing this he’s leaving the tied up prisoners with Gotham PD, who are just going to let them go ahead as per Commissioner Forbes’ orders. And the GCPD will just take the money into their own vault, which belongs to Forbes (and by default Falcone) regardless. It’s a bit of a Robin Hood situation where Batman steals from the poor to give to the rich. All the money goes to Falcone anyway, but without a cut being passed down to the lower-tier criminals who now will all have medical bills on account of their broken bones.

Let’s try not to focus on this, though. The story is telling us that this is all bad for Falcone, so let’s just pretend that’s how this works out.

Bard and Bullock discuss this matter themselves, as they continue to despair that they can’t bring in anybody who was beaten up by Batman. They’ll just have to start finding criminals themselves, I guess, and stop leaning on their Bat-Crutch? Not sure if we’re meant to feel sorry for the GCPD, which would really still be in a pretty decent situation if only they knew how to do their job. The only thing they can do is refuse to untie the criminals Batman leaves lying around, which is a wonderfully petty touch.

In his penthouse, Falcone gathers all this information from one of the criminals Batman caught and tied up at the start of the issue, before asking Tiger Shark to lead the guy out the room. Seems like a waste of Tiger Shark’s services, but sure, fine, I guess butlers are in short supply round Gotham.

Speaking of, the only gainfully employed butler in town heads to the Batcave to see how Bruce is getting on. It looks like the plan is to go visit Hong Kong soon, and find out what happened with Falcone whilst he was out of town these past ten years or so. You know what that probably means: The Batman of Japan is going to show up, because he always shows up in any story set in any part of Asia! Hurray!

Bruce and Alfred also realise that Commissioner Forbes isn’t booking any of the criminals that Batman is catching, which took them long enough.

We get a catchup of the other subplots next, as Bard goes to investigate a cold crime scene where somebody was shot in a phone booth. He’s cornered by hardened beat journalist Vicki Vale, dictaphone in hand. I’m a bit disappointed she doesn’t still have a handful of tasers at the ready, just in case, but I suppose journalists are always the last ones to wise up.

In turns out that the previous occupant of the phone booth was Stephanie Brown, who hasn’t been seen for several issues/two days in comic-time. She’s still leaving messages for her mum, who hasn’t shown up despite getting called every five minutes by her increasingly-desperate mother. A mother who, we see, is passing every voicemail across to Cluemaster. That name still isn’t striking fear in the hearts of anybody, Cluemaster.

Steph is forced out the phonebooth by some random street tough, but just in time for a car to drive by and gun down the tough and a few other bystanders. Steph escapes, barely, and with the knowledge that both her mum and her dad are now out to get her. I guess next she’ll have to try Aunt Harriet, or Uncle Nigma, or something. Some family you’ve got there.

Back in the present day, Bard and Vale are basically flirting the hell out of each other, as they decide they should try to build up a working relationship in order to better get to the bottom of the case. Lord, Vicki Vale doesn’t play around, does she? Let’s hope she doesn’t find out that Bard got to become a cop straight out of the academy, no need to build up a cred or to work freelance – these lazy millennial workers, with their sense of entitlement, you know? It’s easy for them.

Bard gets called by Forbes, who’s had a great idea called “turn on the Bat-Symbol and wait with twenty armed guards”. Bard thinks Batman is too smart for this, which is true, but Batman also never passes up an opportunity for assisted suicide, so sure enough he steps out onto the rooftop. He asks if they can negotiate the same kind of truce that Batman had with Gordon, but Forbes shuts that right down. No room for vigilantes round here, he says. 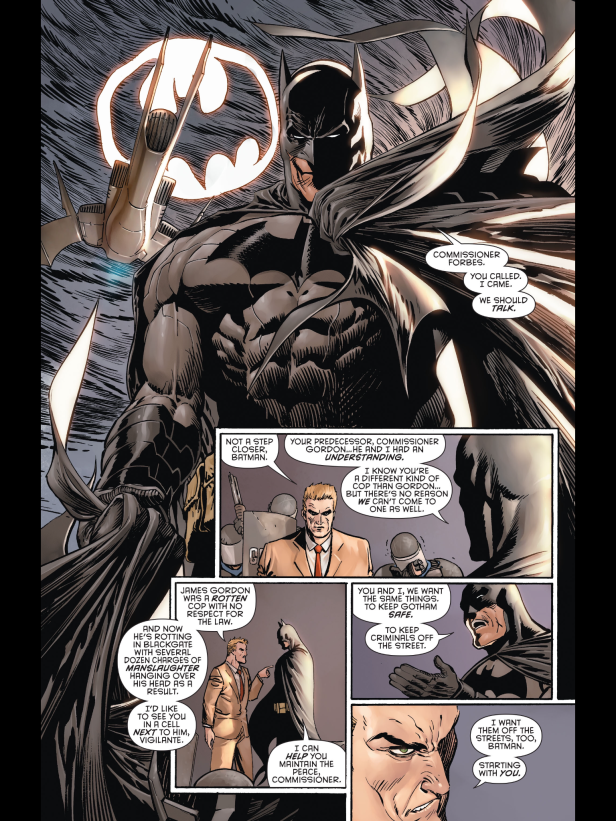 Out of nowhere, Bard calls for the smoke grenades to be launched, which gives Batman an opportunity to peg it – but not before finding himself facing down a bullet from Bard’s gun. Bard symbolically holds the gun away, indicating that he’s the one guy Batman can trust in Gotham. That means… Bard is going to be dead within the next few issues. I hope you all still have your sweepstake tickets to hand?

With Batman gone and the smoke subsided, the Bat-Signal is destroyed and Forbes gives Bard a dressing-down. Just as clearly as Forbes is corrupt, Bard is protecting Batman, but they both seem to view that as some kind of stalemate situation and leave things there.

Back at the Batcave, Batman assesses his standing as a wanted criminal in Gotham. His solution? To head off to Hong Kong on that working holiday he’s been planning. As his jet arrives in the city, he’s spotted by a cat-burglar climbing up one of the skyscrapers. Now, the art doesn’t make it clear that this is NOT Selina Kyle, so I will: it’s not Selina Kyle. It’s somebody who says “bloody hell”, which is how you can tell that A) the issue was written by an American and B) said American wants to let you know this character is meant to be British. I imagine next issue she’ll call him a wanker, then use some kind of rhyming slang. Top stuff.