Gordon’s in the dock, and everybody has their own take on what happened. But what’s with all those rose tattoos that people have now started wearing? There’s an old face coming back into Gotham in Batman Eternal #2! 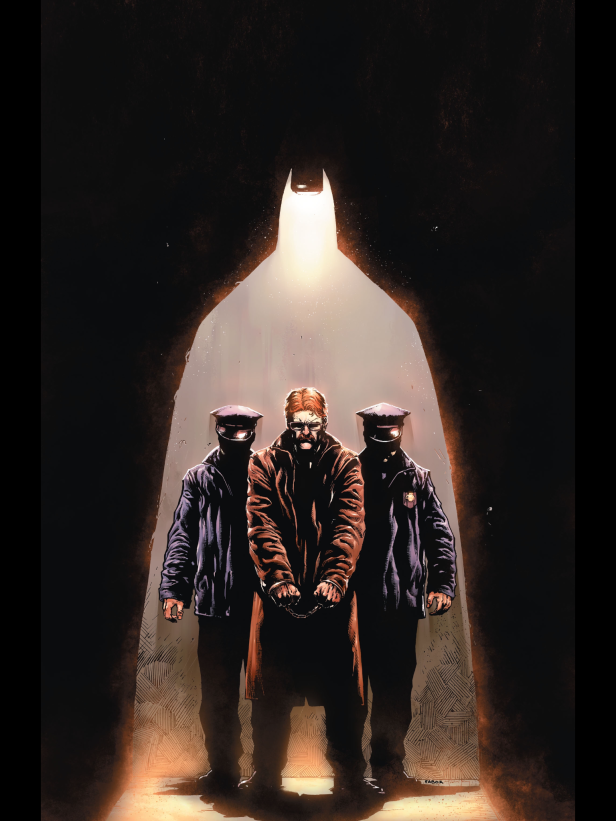 Gotham Mayor Hady has somehow managed to survive for the whole of the New 52, despite several covers which promised me that things were going to be darker than ever before. I do wonder if one day they’ll just give the people what they’re begging for, paint an issue of Watchmen in Vantablack, and see if they can sell that on to readers. I suppose that would make the comic darker but also remove all trace of edges, thus disappointing fans of edgier comics. Did you ever imagine that a recap could go off the rails after only one sentence? Always bringing you unprecedented levels of ramble, us.

I mention Hady because he opens up the issue in his office, trying to work out what he’s going to do about this whole massive train collision business from last issue. He starts pouring himself a whisky, because all law officials in Gotham are preserved forever in the attitudes of the 1940s, but is startled by a shadowy figure who walks into the room. “You?” exclaims Hady, thoughtfully withholding the name of the intruder for the purposes of dramatic continuation.

Whilst he plans his answer to the disaster, the Gotham Gazette starts to pull together their exclusive on the breaking news. The newsroom is made up of three people in a nondescript room, which seems to me like the first time writers have ever successfully depicted modern day journalism. So the three people are: Vicky Vale, who was played by Kim Basinger once; a reporter called Warren; and the editor-in-chief, who is called Mario. And they helpfully explain their roles through the dialogue, although Jason Fabok also uses the Establishing Beard rule to also show off just where the pecking order lies.

Mario has a douchey goatee, which indicates that he is the person in charge. Warren, in comparison, has a full beard, which is shorthand for ‘this is a mature person’ – like Ben Reilly in the Daredevil TV series. The more dignified the facial hair, the further down the chain of command someone must be, but at the same time the more respect they must be given. Vicky Vale, as a woman, doesn’t have any facial hair at this stage, and this marks her out as the lowest of all the team, as well as the person who actually has to do all the work. The Establishing Beard rule will never let you down, readers.

The team print the story, after some objection from the reporters, who think Gordon is too nice to schedule two trains to crash into one another. Because hey, this is something I think bears asking – what is Gordon actually being accused of, here? He shot at a suspect who is unarmed, but are we also expected to believe that he’s being arrested for previously arranging for two trains to drive into one another? He wasn’t involved in that at all, other than that he shot an electric box which theatrically exploded as a result. Given DC’s villains are all hyper-prophetic, surely the only thing Gordon should be getting accused of is of shooting at an unarmed man.

There’s a two-page sequence with all Batman’s allies, which is effective in showing us who they all are, a little snippet of their personality and attitude, as well as what they might be up to later on in the series. Batgirl heard about the incident first, because she’s a super-hacker, and she’s already dressing into her ‘work’ clothing. Luke Fox watches a little later on as the news breaks onto TV, stood in his ‘mansion’ which looks very much like an abandoned warehouse. Batwoman and Red Hood are already in costume, because for them the costumed life is their worklife, whilst Harper Row and her brother get the news from the internet.

I think this is set at a time where the Robins are thin on the ground – Damian is possibly dead right now, as is Dick Grayson (from Forever Evil) which just leaves us with Red Robin. He’s never been my favourite Robin, probably because I’ve never read any of his stories – so let’s see if this works as a 52-issue bonding exercise.

Hady’s conversation continues on with the shadowy intruder, who certainly knows where the best spots are to stand about if you want all your body to be visible except for your face. It appears that Hady is another one of those corrupt officials in the DC Universe, except here he was being bankrolled by mobsters who were chucked out of Gotham before they could use Hady as their puppet. Essentially he got all the money and the power from being associated with the mob, but then the mob got kicked out of town by the rise of Batman, and Hady got to stay in power without having to follow up to any of his mob ties. Pretty lucky, Hady!

The shadowy man explains all this to Hady whilst pruning a rose and then crushing it in his hand, causing himself to bleed, which seems like a strange way to establish your renewed power. All you’re doing is pissing off Poison Ivy, shadowy man! It should be worth pointing out right now that the shadowy figure is actually Carmine Falcone, and that’s obvious about halfway through the issue. He has the noticeable scars on his face, and the obsession with roses and discussion of the mob essentially gives the game away early.

Back at the subway station – which hey, is actually in the basement of the aviation museum, which means that Gotham must be pretty surprisingly big fans of aviation exhibitions – the rescue efforts are being overseen by a man with glowing green eyes and a shadow which doesn’t match his profile. Wait, is Peter Pan in this series?

Just to emphasise how much the series plans to use absolutely every aspect of Gotham, we head next to Arkham Asylum, only to stop off at the cell of Dr Phosphorous. DocPhos is upset that his radioactive conditions are getting worse, and he can’t be injected any medication because he melts the needle. That is… horrible. DC in particular have a bunch of villains whose lives seem to just be absolute hell. Sure it’s okay for the superheroes to focus on incoming threats, but I’d love to see them do something really heroic and help save these people from the various maladies (self-inflicted or otherwise) which actually drive them to be evil, y’know?

Anyway, an undead Deacon Blackfire shows up and taps Doc on the head, causing him to radioactively explode, which is why maybe you don’t store a human bomb in the basement, you guys.

In the Metro’s CCTV station, Batman is reviewing the crash footage when Catwoman appears, mainly to try and rile him up. She has… no reason to be here other than to talk to Batman, but she doesn’t have anything in particular she needs to talk to him about? She just likes teasing him in the aftermath of horrific train crashes which cause his best friend to be arrested on underexplained pretenses, I guess. It does make things a bit handy for once Batman recognises the guy with the rose tattoo from the first issue, though, who he IDs as a minion for Falcone.

Batman calls him “The Roman”, Carmine Falcone, which is a nickname I’d forgotten Falcone had. Was that ever played up anywhere? I wonder if he’s ever hired Maxie Zeus for some toga-based team-ups. This really does have me getting my hopes up that the entire story is going to be interrupted in a few issues by Roman Reigns’ music playing, as he seeks to reclaim his moniker from Carmine. That’d be the second time that Reigns has gone after a dead man.

The last page confirms the reveal we all guessed ten pages ago and Batman guessed four pages ago. It’s Falcone on the rooftop with Hady, scars and all. He also looks surprisingly handsome, which I wasn’t expecting. He says that the war for Gotham’s soul is about to begin, and he is the only one who can set it right. Lock up your petunias, people!