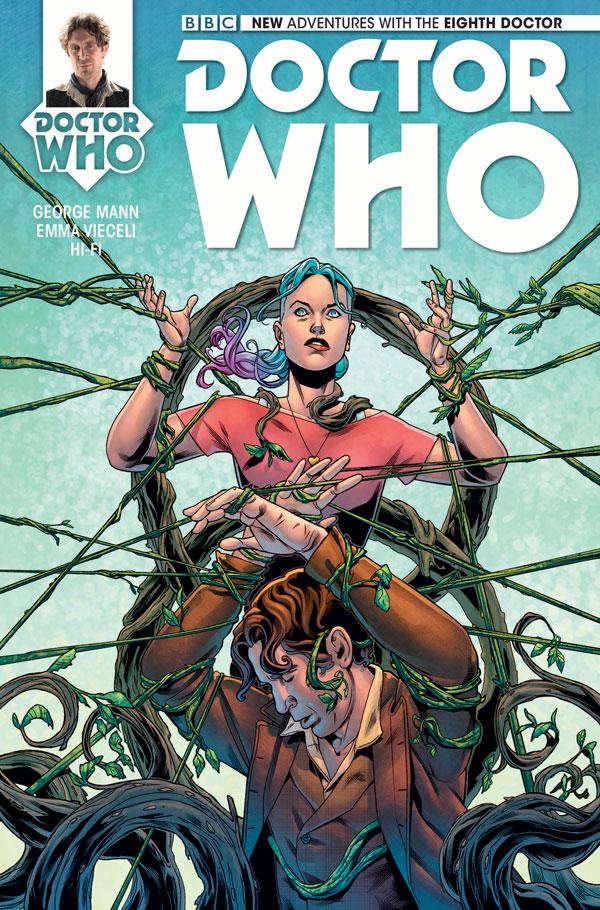 Well that’s certainly a cover which is designed to get all the mums-a-flutter, isn’t it? You wonder if it’s almost like Rachael Stott… planned it… that way. Never change, Rachael Stott.

This time round we start at an intergalactic auction house of sorts, it seems, which is how I choose to believe The Doctor spends all his time when not having a great time down the local museum. That opportunity to get discount gadgets to take back, lock up in one of the spare rooms round the back of the Tardis, and promptly forget about until they achieve sentience and attack? No way he’d miss out on that. Items up for sale appear to include a cyberman head as well as a box with a hologram of a Time Lord popping out the top.

The particularly fabulous auctioneer (who I choose to believe is modelled off UK artist and lovely chap Ted Brandt) is in the process of selling a portrait for two million credits, going to an audience member holding a no #12 sign to indicate his interest. Hey… wait a minute….

Apparently to the purchaser has a plan for how he’s paying for it, though, which is perhaps going to include purchasing some GILTs as part of a long-term investment plan. 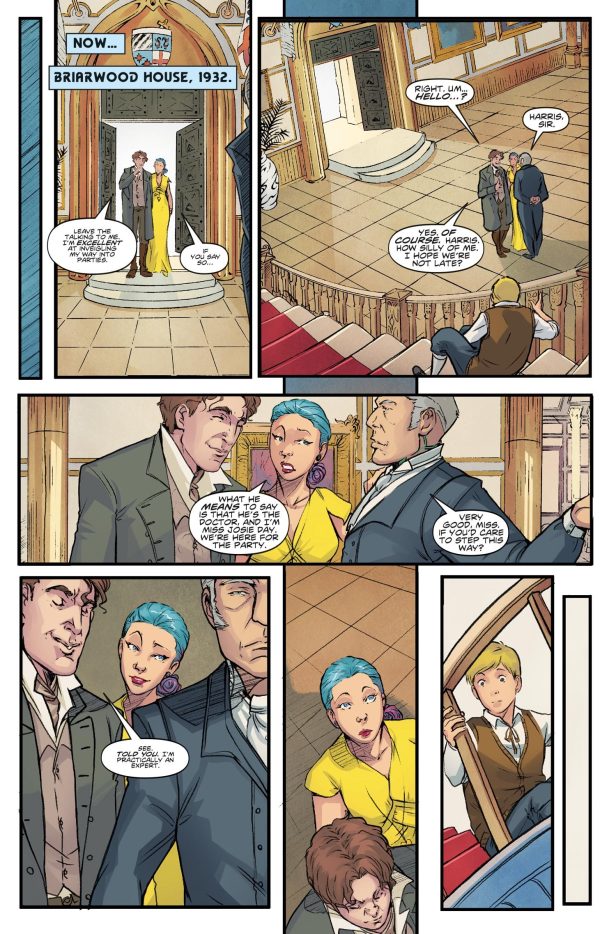 Anyway, the comic jumps across to the present day, whcih in this case is 1932. Josie and The Doctor are trying to bluff their way into their latest party, which is being held at a fancy mansion-type place somewhere in England. After The Doctor does a Hugh Grant all over the butler, it’s left to Josie to get them past the front door, which she achieves by… asking. On the way in, she sees a small boy watching her from the starecase, apparently in awe. Her hair’s blue-r on the outside, kid.

Once inside, there’s a noticeable lack of variety in the snacks. Appopriately disappointed, the Doctor decides that he must’ve been invited not due to the plethora of snack variety that was meant to be on offer – but because there’s a murder coming, and this’ll be a murder mystery sort of event. They decide to split up and meet back up in half an hour, and there’s absolutely no chance the Doctor is ever going to be on-time for that sort of thing.

Downstairs, which is where all the staff live and work whenever you see a mansion appear in an England-based story, the butler and maid exchange some small talk about the party – before saying it’s not time to “complete the circle”, turning to face the rest of the staff who are all waiting for them, hands outstretched, and with vines sprouting out their bodies. Erm. The kitchen table is covered in weird symbols as well (rather than a variety of snacks which you might have been hoping for). Less occultism, more empanadas, staff!

Having completed their own circle round the party, the Doctor and Josie compare notes. The only thing going on here is that the eldest son has been popping out at all hours with his ‘lady friend’. Erm, pun…. Intended? Unintended. You decide. The aforementioned son takes this opportunity, now the exposition has been exposited, to make a grand entrance. And oh my, but his shirt is ripped open and he’s all sweaty. It turns out this isn’t for good reasons though, but because the trees have apparently attacked him and killed his lady friend.

His father isn’t a man for nonsense, which’ll probably lead him to an ironic death in a few pages, and tries to get his son to calm down – only to be covered in vines which spring out at him. Two of the servants subsequently vom out a whole bunch of vines as well, which rapidly take over the room and start racing around. The Doctor and Josie run off, with Josie presumably learning that the first rule of attending a fancy party with a Time Lord is to always ensure you’re wearing trainers along with your nice dress. The boy from earlier joins them as they bolt out the house, the only three to escape, apparently. Do you think the Doctor does a lot of cardio training between issues? He must have a few gyms in the Tardis somewhere.

Speaking of – that’s where they’re heading, but once they reach the forest by the house they find they’re already too late, with vines having crept around the box and trapped them outside. Little woodlike nymph creature thingies are playing around all over the place, which the kid recognises as “The Nixi”. This must be how Hal Jordan feels every time he fights somebody in a yellow coat, because everybody knows the Sonic Screwdriver don’t work on wood. The boy suggests somewhere else they can go hide, dragging them along to “the old ice house”.

Now, this is a real thing which some big houses or gardens used to have. Kew Gardens has one, although they tend to use a “fridge” mainly nowadays. It’s a building which leads underground, and if I remember correctly takes you down to a frozen well which servants would jump down into, chip ice cubes from and then bring back into the house. You don’t normally get them in Yorkshire, because all you have to do here is leave a glass outside for a minute and it’ll come back frosted up proper, like. By gum.

The kid, Bertie, explains what’s going on. Apparently the Nixi are a race of wood spirits who owned the land where the mansion is built. When the family first built on the site, the Nixi were understandably a bit miffed off, and asked if they could kindly please not trespass on Nixi grounds. The humans ignored this, which tends to happen whenever somebody brings up zoning passes to a group of builders, leaving the Nixi no option but to lay seige to the property. Foiled at the time by a magic pendant, the Nixi King fell into a deep slumber and was left beneath the earth. Pretty convenient timing, eh?

Apparently the only thing which would wake the King is if one of the children living in the house were to misbehave, and Bernie thinks it’s his fault for breaking one of the greenhouse windows. Yeah, no, pretty sure it’s more likely your brother running round with local girls like he’s… he’s Paul McGann, or something. Josie gives Bernie a hug and says it’s not his fault, which the Doctor (and this is just so classic him) doesn’t exactly confirm.

When the Nixi start to beseige the ice house, the trio escape again, and I’m only just now realising that Josie is wearing boots now. Smart girl! She must have hidden them in her dress pockets, which I’m guessing must be bigger on the inside. As they run, the Doctor starts to have a bit of a freak-out because he doesn’t know what to do. He starts to flip onto random tangents which Josie quickly shuts down, a bit like when Donna used to have to stop Tennant from getting distracted. Deciding that Bertie’s fairytale must have some truth to it, the Doctor decides they should try and find the Nixi King.

I don’t know about you, but I really wish I could hear Paul McGann say that sentence. “We have to find the Nixi King!” I bet he’d nail that line.

Heading to a set of stone circles in the garden, which have the same symbols as the kitchen table did in the servants’ quarter (and the same lack of snacks), the Doctor quickly recognises them as parts of spaceship. The Nixi King is actually an alien who was sealed into his sleeping pod: it’s just that the sleeping pod is starting to open up again.

Theorising as wildly as he’s stomping about, judging from Vieceli’s animated body language for the character, he decides that the Nixi King acts like a “King Bee” for the rest of the creatures, which are acting out because he’s starting to stir. They need to go back into the house to find the amulet thingy which sealed him into the pod to start with.

After failing once again to make a subtle entrance back into the building, the trio find themselves surrounded by nixi-infected servants once more. The Doctor, mirroring issue one, leaps straight into the heart of the group, taking on the infection himself and serving as a distraction. It’s fascinating how self-sacrificing this Doctor is – the other ones just aren’t like this, certainly not in the same way. Every chance he gets he’s sacrificing himself to save other people. Ultimately that’s what’s going to get him killed, you could argue.

Bertie finds the butler from earlier, who is infected by Nixi but still in control of himself. He won’t allow them to hurt the kid, but instead uses the vines to pick up a sword hanging high in the doorway and pass it across to Bertie. If only there’d been more time to spend with these characters, this would have had much more of a pull to it as a scene – sadly it just sort of… happens. Two issues of this storyline might have helped, but one issue just isn’t enough to flesh this out. 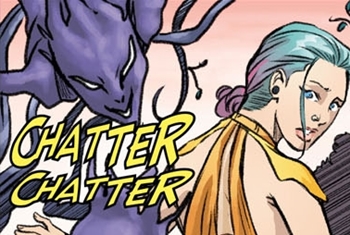 As they leave the house again with the key, Josie is caught by the Nixi – leaving Bertie as the only one who can save the day. Pretty neat! Kicking some Nixi aside as he goes, he drops the key in place and, uh, that saves the day I think.

Back in the mansion, everybody is recovering – aside from the Butler, who is apparently dead for some reason. A quick wrap-up explains that it was actually the butler’s family who saved the house from the Nixi all those years ago, and that the occupying family had appropriated his story for their own use. The dad says he’ll give it back. The page count really does hurt this story quite a bit, y’know. It’s a shame, there’s an interesting story here but it just needed a few more pages to establish the family properly, who they were, and make us care about what’s going on with them.

The Doctor doesn’t stop by long – having dragged that info from the family, he takes Josie by the hand and leads her back to the Tardis. One last stop for them.

Want to read along with Shelfdust? Buy the trade through our link below – it helps out the site, too!