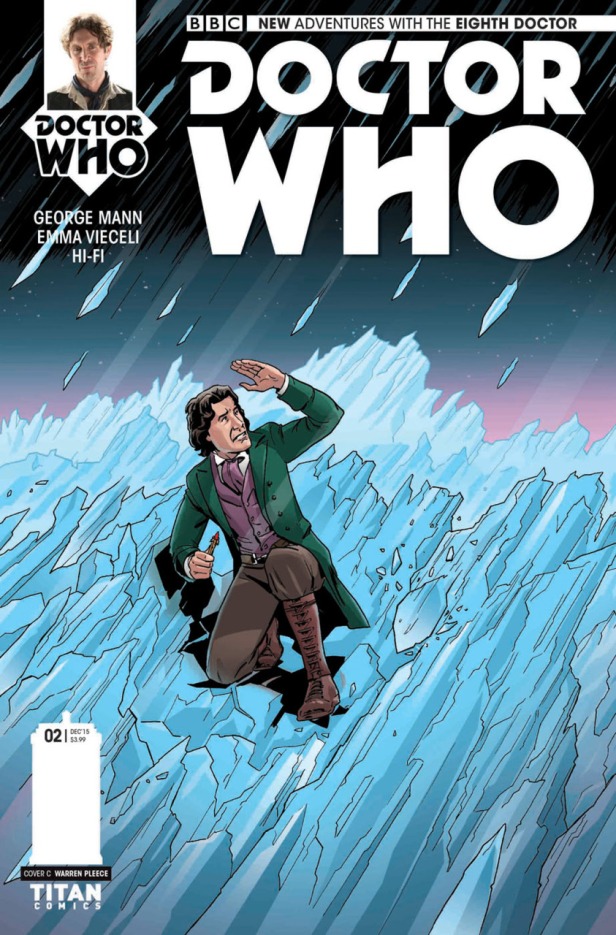 The second adventure for every companion should take place in an alien landscape, in one of the unspoken rules of Doctor Who (the second rule being that adventure no #3 take place in olden-days England). And so we begin at a planet which looks a bit like an everlasting gobstopper, hard orange shell hiding a blue world on the inside. The planet is surrounded by bits of crystal, which are showering down and smashing into the surface as millions of deadly little daggers.

And running through the deadly hail? The Doctor and Josie, who isn’t particularly impressed at landing in the middle of a warzone this early on in her time with the Doctor. Doc isn’t too pleased either, grabbing her hand and telling her to run for shelter with him. All the buildings look like cans of tropical flavour Red Bull, held together by giant strands of woven blue hair. Y’know, just in case you were wondering. There are some locals about, but they’ve been hit by the crystals and, from the looks of it, have turned into crystal statues as a result. 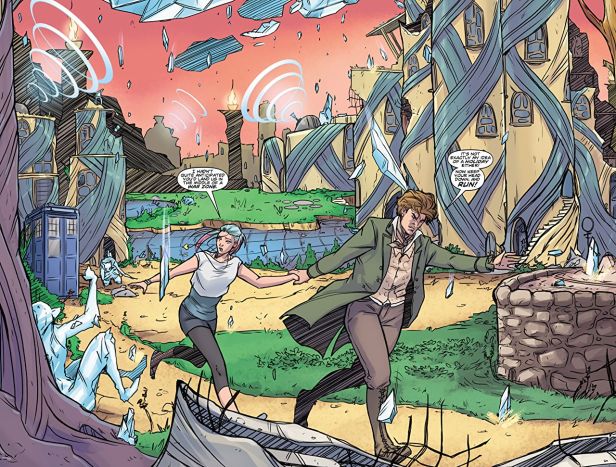 Josie trips on the way, in classic style, which I think might be because she’s wearing slip-ons. The Doctor helps her to her feet just before one of the can houses cracks in half and falls to the ground where Josie was lying, which I think is the first time I’ve ever seen this Doctor do anything physical and heroic-like. Once they find safe ground the Doctor takes a moment to reflect on his hatred of violence and war. Now, this is probably of particular note because this is the time when the Time War would have either been starting up or been active. When he says “it’s spreading faster than I can contain”, there’s definitely an inference that he’s referring to the Time War, which this regeneration spends his entire time keeping away from. This is the despair which leads to defeatism that leads to him essentially giving up his life, ultimately.

It seems that the crystals are invading the planet, here, and whenever they injure someone it also acts as an infection, turning the victim into a crystal themselves. And it turns out that’s rather bad news, because Josie’s been caught in the leg and the infection process is starting for her. Aha! A story where he’s going to actually have to be a doctor, then! He starts trying to think of ways to help her from a medical perspective, probably cursing the day he ran off before finals. Plan A: get back to the Tardis, which is always his answer to everything.

A trapdoor in the floor opens and the homeowners association march on up to have some words with the duo. They’re furry blue cat people, in case you were wondering if this was a comic drawn by Emma Vieceli or not. The cat people start an interrogation which leads to the Doctor and Josie being essentially arrested. We also find out that the crystals are called “Spherions”, which the Doctor calls “pretty”. Praising the invaders isn’t going to get you off on the best foot, Doc.

They’re taken downstairs to what turns out to be quite a nicely appointed subterranean studio apartment, from the looks of things, with a particularly nice corner kitchen, it looks. These cat people have a pretty impressive understanding of floor planning. I think the cat people are called Lumin because the planet is called Lumin’s World, but let’s just go with cat people for now.

The Doctor is still totally focused on helping Josie, and has given her his jacket to wear, which is a nice little touch in the background. The cat people believe there’s no cure for being crystallised, as I think the xx once sang. This leads to more arguing as the Doctor yells somewhat uselessly about the pointlessness of war – which the cat people point out is a bit of a simplistic thing to say when he’s only just landed on the planet and hasn’t got a full grasp of the greater context at play. One of the nicer kitties takes him aside and explains that it’s a pretty harsh picture. 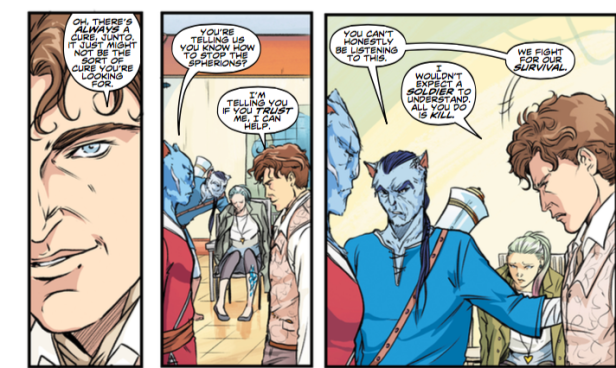 Essentially, the crystal people attacked and colonised the cat people after invading their home planet, turning cat people into crystals and chasing them wherever they ran. The cat people have run away to several other planets, but each time they’ve been tracked by crystals and attacked again. This is their sixth or seventh planet, it seems, and they built it inside a dead one – trying to hide from their oppressors. And given how much pressure they’re under, they’ve done a pretty impressive job. The underground world looks a lot like an angel cake – but, y’know, a populated one.

Josie’s situation is going downhill, and the cat people say they’re going to have to send her back to the outside world before she turns fully into a crystal person herself. A strange noise passes through the room, which it first thought to be some kind of assault – until Josie recognises it as singing. The Doctor, taking this as some kind of sign that they must be at least a little civilised, decides this is his cue to head upstairs and have a chat with the Spherions.

Josie and one of the nicer cat people show up, with Josie’s left side now having turned to crystal. The crystal dudes apparently didn’t realise that the cat people were sentient (which seems a bit strange when you’ve seen the cat people build spacecraft and fly away multiple times) and that’s why they kept invading. They’re not going to stop just because a handsome man yelled at them a bit either, but Josie steps in to offer her own telling-off to the crystal bunch. She offers them a guilt trip – if you kill off a species to save yourselves, then you’re going to feel guilty the rest of your lives, etc.

Happily, that works, and they offer a retreat until the Doctor can find them somewhere new to stay. Less happily, Josie is still infected, and she half-collapses after her speech. With the planet safe for now, the Doctor takes her back to the Tardis. The Spherions apparently follow inside as well, because next thing we see they’re on another world where the crystals can spawn with the plants or something, so they’ll be safe now. As a thanks, they sing at a pitch which shatters the crystals in Josie, leaving her safe and sound. 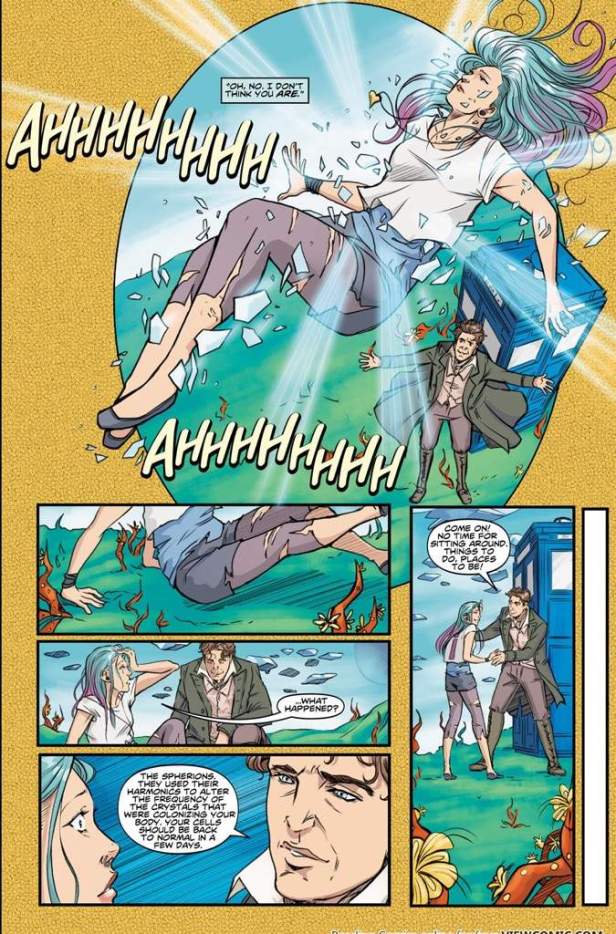 Adventure over, the duo return to the Tardis, where the Doctor reveals a room he’s made just for her – a place where she can sit and paint and draw some inspiration. It’s his own thank you to her for saving the day via guilt trip, and it ends the issue on a lovely note. Hurray!