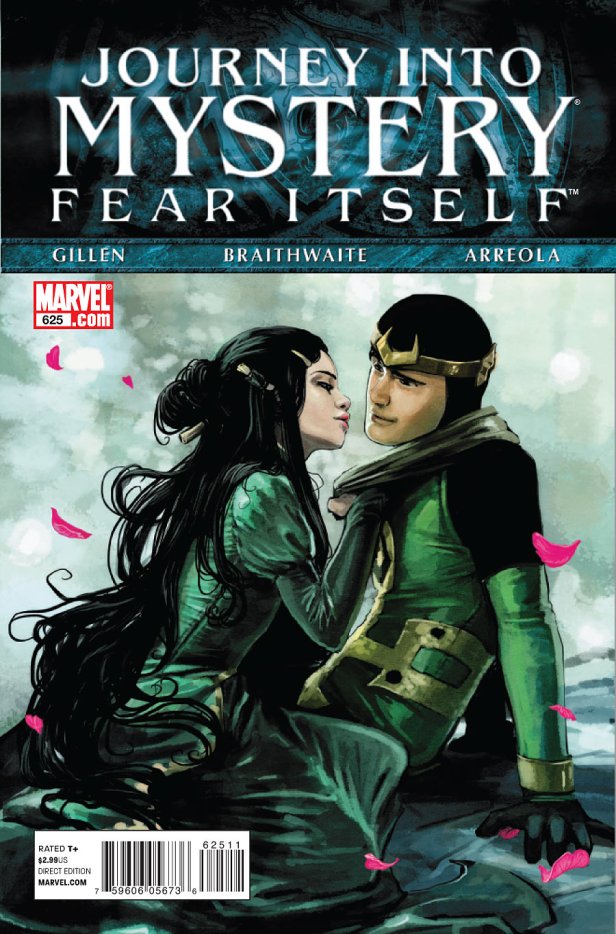 Mephisto counts Pride as one of his favourite sins in the latest issue of Journey Into Mystery, and it sure enough recurs throughout the course of the story. Mephisto says it in reference to Hela, who spends much of this issue posturing on a hellish cliffside as she and her demonic red ‘landlord’ exchange harsh words about their current situation. And he’s not wrong – Hela is, at least on the surface, prepared to engage in a war she knows she can’t win. Mephisto’s consistent riling seems designed to bring her to battle as soon as possible, and it looks as though he’s about to get his wish before Loki interferes.

The scenes between Mephisto and Hela play out in a pretty entertaining manner, as the pair draw almost to the point of farce in the way they verbally duel with one another. Mephisto doesn’t take Hela seriously at all – to her face – and that makes Hela more and more angry as the issue continues on. However, it could also be argued that Mephisto is only able to get one-up on Hela because he pretends not to take her seriously. He’s gone to war with her so clearly he is pretty concerned about her intentions, but his approach essentially disarms her and turns what could be a bloody battle into a scene from Morecambe and Wise. With slightly bloodier language.

Once more Journey Into Mystery shows war as a side-effect of wordplay, and diminishes violence in favour of establishing verbal stakes between the characters. They may each have an army stood behind them, but the key here is in the simple back and forth between Hela and Mephisto, and how they each play their words affects the need for violence, and if a war is necessary or not to begin with. The reader experiences this firsthand, as there’s no reason to suspect that the issue won’t end with a war in Hel – but that’s not the important part of the narrative, not in the mind of anybody reading through the story.

Because of course, this whole scene is essentially a distraction, a way for Loki to pull the two characters to one side and make them bicker whilst he goes wandering Hela’s kingdom, looking to speak to the emissary of the serpent. Whilst he has them threatening war as part of a side-story, he addresses the actual threat of the series, and has a similar bout of wordplay. Only in Loki’s case, his grand boastful speeches are backed up with action, as Tyr kills all of the emissary’s guards before ultimately slicing his throat as well.

Loki makes a grand show of things here, in a scene which is quite scary simply because the character is starting to really enjoy what he’s doing. Before we saw him under the eye of Asgard, and on best behaviour as he caused mischief and tricks. Here though, nobody’s aware of him, and we start to see the character unravel himself a little and show off a more sinister, unpredictable side. He does flinch away from the emissary getting their throat slit – but prior to that he watched the guard have their spines snapped without so much as a stumble, and his enjoyment of the situation is surely designed to make the reader feel unwary.

In fact, this might be the most fun Loki has had all series, to date. He begins by making a random, blunt pass as Hela’s handmaiden Leah, before arranging for several deaths which help him reach a position of power whereby he can start to negotiate with both Mephisto and Hela. That leaves him with a small group of helpers, all of whom he immediately begins to subvert and betray in small ways. Loki may have started new, but on the basis of this issue that doesn’t mean he isn’t immune from being re-corrupted by the lure of chaos. He makes jokes, dances around, and doesn’t blink twice at seeing several horrific acts whilst in Hel. He’s starting to get distracted from his original mission, it seems, because the thrill of mischief is so strong.

But the distractions don’t end there. Shortly after Loki makes his off-panel bargains with both Mephisto and Hela, the narrator begins to recount what exactly what promised between everyone. Yet before he can complete the story, the narrator is himself distracted from informing the reader by an impromptu story from Loki, who offers a ‘charming’ two-page digression into the serpent’s childhood. As the serpent is the villain of another story (and has yet to actually appear properly in Journey Into Mystery) it’s pretty fair to say that there’s no reason for the series to introduce this side-story except as a distraction technique. In stark contrast to elsewhere in the story, however, this one doesn’t get remarked upon.

In only a few issues it has already become obvious that this is a comic which is withholding some vitally important information from the reader – and has chosen various ways to distract and confuse the reader away from realising what questions they should be asking. Here we get a full-on distraction tactic followed by a surprise finish to the issue, but once more it’s clear that the comic is toying with the reader. That idea of withholding information is brought back, brutally, on that final page, as Loki reveals that he’s asked the Disir to kill the Hel-Wolf. Why? So Loki can ride the corpse through into Limbo, where the soulless are sent on death.

It’s a reminder that perhaps the reader needs to be a bit more careful about how they approach the series. A lack of information just killed one of the supporting cast (although death in this sense is pretty fuzzy) and it’s rather apparent that this should be taken as a warning. And for his part, Loki also serves to throw the reader off the scent, along with the characters who are in-story following onto the young sorcerer’s every move. There are two or three points here where the comic slows down, pauses almost to a halt, and then has Loki carefully say something eloquent which sounds like it might be the key to the story.

The most obvious of these is shortly before he launches into his story about the serpent. He mentions a prophecy about Thor fighting the serpent and how this must end in Thor’s death – but he then counters that by dismissing the nature of prophecy. Not all prophecies are, Loki says, actually prophetic – many of them are simply wishful thinking, or logic circles which make something true only because they mention it.

If someone says “don’t think of a black cat”, the first thing somebody does is think of a black cat, because the sentence leads them immediately to it, without thinking. This seems to be the core of Loki’s argument, which essentially says that intent and meaning are one thing, but prophecy is another thing entirely. Taking something so huge as a prophetic vision of the future and boiling it right down to a game of semantics seems like something Journey into Mystery might be very interested in addressing at some point.

Loki’s madcap journey through the afterlifes (afterlives?) sends him tumbling down into Limbo at the end of the issue, although presumably he’s not heading to see the X-Men. It’s hard to predict what his plan is at this time, and that is the leveredge he uses to wield power over Mephisto, Hela, and everyone else we’ve seen in the comic so far. It’s also made him overexcited, and proud. Pride comes before a fall – but is that fall his fall into Limbo, as he calculated it would be: or is it going to be something else entirely?