Demon Logan heads off to meet the X-Men, and ends up walking straight into a big shiny metal hurdle. Meanwhile, the Devil shows off a lot, Spider-Man is rude to a total stranger, and the Silver Samurai probably should’ve brought stronger armour. It’s Wolverine Goes to Hell #3!

Here’s a quick Wolverine update: he’s getting beaten up in Hell. Shocker, right? At this point he’s barely able to even fight back anymore, and the swarms of villains have been whittled down to the one core villain through Logan’s entire life: Sabretooth. They’re busy fighting each other like something out of a Ken Russell movie, shirtless and dirty and hey, this stuff has to be working for someone. Whilst Wolverine monologues about his life and newly-found death, Creed is busy slashing him up and punching him around.

Logan snaps out of it long enough to make fun of him, though, but before Creed can run back over for some more beating, the Purple Devil calls him back. Sabretooth, surprisingly enough, turns right back round and sits happily underneath the Devil’s hand, like a pet. It’s a much more effective demonstration of the Purple Devil’s power than anything the dude has said to this point. In the panel which sums up this entire storyline, he says “I’m going to train you to do that” to Wolverine, who replies “not likely”. Spoilers, Logan! 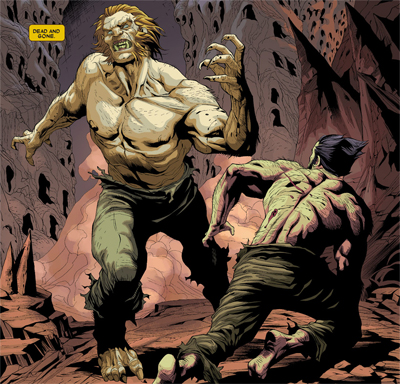 After a few more panels of gloating monologue from the Devil, which I won’t cover because it’s not that interesting and marks perhaps the fifth of sixth time we’ve had to hear this sort of thing from the character, we get back to some good stuff. Namely: the comic addresses the death of the Silver Samurai from two issues ago. Harada is dragged out in front of Wolverine, arrows still sticking out of him, so he can deliver a message to Logan.

Now, given that the most effective things we’ve seen so far have relied on existing characters – Mariko, Sabretooth – the comic treats this next section really strangely. The idea is that Harada is meant to tell Wolverine that all his friends are being murdered back on Earth, and there’s nothing anyone can do to stop it. Harada being one of the first to die, Wraith presumably to follow next. But rather than let him get this message across, the Purple Devil keeps interrupting him instead. He cuts off Harada’s head and mockingly asks him to keep going, but when Harada tries the devil pulls out this giant sword club type thing and smashes Harada’s body into pieces.

Which makes the sense a lot funnier than maybe it should be? Anyway, the weapon is apparently a “Soulcutter”, and no wound it makes will ever heal. After Logan spits in his face, Purple Devil then demonstrates this by cutting off his ear and feeding it to one of the other demons. Again, strange choice, to be honest. Maybe take a hand off, given that’s where Logan’s weapons are? Not that I want to critique the torturing choices of, y’know, the devil, but he does come off as a little amateurish here.

He orders someone to nail Wolverine to a wall and leave him there for a few thousand years.

A hugely effective two-panel sequence next shows how this storyline is impacting all Wolverine’s allies on Earth – and because Jason Aaron has been given such freedom to do whatever he wants in this story, there’s a lot of damage caused. X-23’s home is burning down, Daken is being attacked, Yukio’s been gutted, Harada and Wraith are both dead. The Sons of The Tiger are about to be attacked, whilst Maverick is on the run and in hiding. And you remember that gang of Mark Millar rejects? They’re heading for Madripoor, where I hope Lindsay McCabe is waiting to beat them all in a drinking contest.

Whilst we’re back on Earth, Melita is still trying to call through to anyone on Wolverine’s phone who might help. She’s onto Spider-Man, who laughs at the idea of Wolverine having a girlfriend and promptly hangs up on her. Jerk. I do understand why she might call Spidey before trying “X-23” or “Doop”, but I’m surprised she didn’t call Sage. Sage would’ve solved this in an instant.

At the same time, she is hanging round with two Ghost Riders, which you think she’d take as some kind of comfort. They’re questioning Mystique about what happened, and Raven basically admits to being the one who lured Wolverine into the trap that’s sent him to hell in the first place. Hellstrom confirms her story, saying the place is “dropping with demonic residue”. Which, ugh. Hellstrom always says the grossest stuff in every comic he shows up in.

They’re ready to start the process of kicking the demon out of Wolverine’s body – which won’t help him in Hell, but will maybe give him something to return to if he can ever escape. However, they’re not willing to do it unless Melita is 100% in on the process. They need to know that she loves him, which… she’s only known him for a few weeks or so! This seems like a lot to ask of her. Also: automatic death sentence for anybody who openly admits it whilst on panel.

Back in Hell, Wolverine has been nailed to a cross (leant on its side to form an ‘x’, of course) and is having a bit of a rest. That rest is interrupted by a whisper in his ear which turns out to be Puck. It’s a really nice moment, this, as Puck basically tells Wolverine that resistance is power – the more Logan annoys Purple Devil, the weaker he gets and the more restless his dominion becomes. At the same time, however, he doesn’t actually do anything himself to help Wolverine – y’know, take him off the cross he’s been nailed to, maybe? Instead he just walks off. 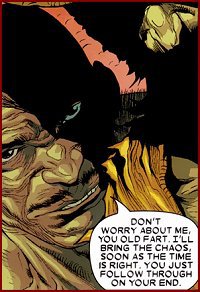 Logan then has to peel himself off the cross without any assistance at all – Puck, your powers 100% include super-strength, according to Comicvine, and you couldn’t be bothered to help out here? – and promptly starts messing up some demons. It should be worth noting, because of course I checked, that his ear has already grown back from the apparently unhealable wound it received earlier.

Above ground we have Melita, having presumably given her “do you love Wolverine?” answer off-panel, heading off into a church with Hellstrom. As of this point I don’t think either of the Ghost Riders have said anything yet. My suspicion is that they were only included so Matt Wilson could draw some pretty flame effects. They’re all set to do whatever their magic is that brings back Wolverine – they just need Dlogan to show up so they can start it. He’s made it over to Utopia, though.

Teleporting to the island (he can teleport now?!) he walks straight past Rogue and Hope Summers, who at this point were best friends and possibly psychically connected to each other. They’re too busy playing chess to really pay any attention to Wolverine, which seems like a drastically optimistic reading of Rogue’s interest in strategy-based board games. This is a woman whose idea of ‘tactics’ is ‘rip off the door and smash everything’. I’m not sure she’s the sort of person who sits around enjoying chess. Mousetrap, though – Rogue would bloody love a good game of Mousetrap.

Dlogan heads to Wolverine’s room, which has a handwritten ‘stay out!’ sign on it like a ten year old would. Inside? There’s a few boxes, a camping bed spread on the floor, and basically nothing else at all. Jeez, Wolverine lives a depressing life. Dlogan’s plan is to burn all the boxes and get rid of Wolverine’s personal effects, but then Kitty walks in. And here’s a reminder of the past: she’s wearing that spacesuit because this is the period in time where she couldn’t control her powers.

Strangely enough, Kitty immediately recognises that something is wrong with Logan but doesn’t attempt to outright murder him, which either makes her Wolverine’s greatest friend or a bit out of touch. He starts doing his telekinesis thing and seems set to murder Kitty before he gets backhanded into the wall by eight feet of charming Russian muscle: it seems that Colossus is stepping in and ready for the fight against Wolverine. That’s a fight I’m interested in seeing, actually, especially as I can’t remember the pair ever having a one-to-one fight before.

Also, I think Colossus is awesome. I’m aware not many other people agree, but he’s a devoted yet out of touch and clumsy older brother and I see a lot of myself in him as a result. So yeah! Piotr vs Dlogan, next week! 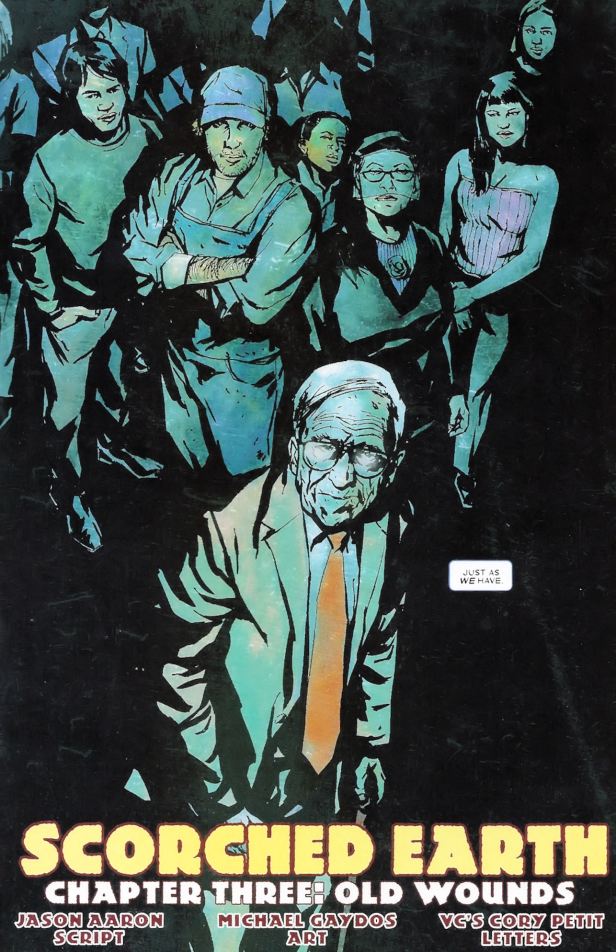 So who are these random people who have suddenly decided that Wolverine needs to be sent to Hell, and swapped out with a demon who’ll go round on Earth and stab up all his allies? The third of the backups for this storyline starts off by once more recapping the current status of most of Wolverine’s friends – Amiko, the X-Men, etc.This time, though, we’re watching all of this through a series of CCTV feeds, which turn out to be operated by the mysterious group behind this whole event.

And they really are just a bunch of randoms. Michael Gaydos, providing the art for this issue, is the perfect man to draw them. He makes them look so standard-issue in such a deliberate way, and it’s fantastic.

Watching a news report from the scene of Melita’s newsroom, the group find out about the security guards who got killed way back in the first issue. This alarms everyone in the group except for the old man who seems to be their leader, who panic about other people getting killed. So wait, it’s fine to actively plot the death of a fifteen year old schoolgirl, but two security guards are too far? Right, so it’s a very particular morality that these people possess I guess.

The old man calls the Mark Millar superhero rejects “mongrels”, which I think is actually Marvel’s official naming for the group. He then defends the senseless murder of random people in a very specific way that suggests he’s the only one of this group who isn’t going to think twice in the penultimate issue. This old guy is absolutely going to murder the rest of the group before they have a chance to surrender to Wolverine, calling it now.

He holds out a gun, and says “allow me to show you the exit”, which shuts them all up. He then goes outside and starts a soliloquy for his dead father’s benefit, about how they’re going to finally get revenge on Wolverine and how he’s not even started with all the surprises that they have in store for the Canuck.

He also has a garden filled with statues of Wolverine getting murdered in a million different ways, which is awesome. When I buy a house, I hope I can commission statues of X-Men being killed off. Beast and Longshot would look great tied up in ropes on my front lawn.

That came out wrong.

Want to read along with Shelfdust? Pick up the trade through Amazon through the link below – it helps us out, too!