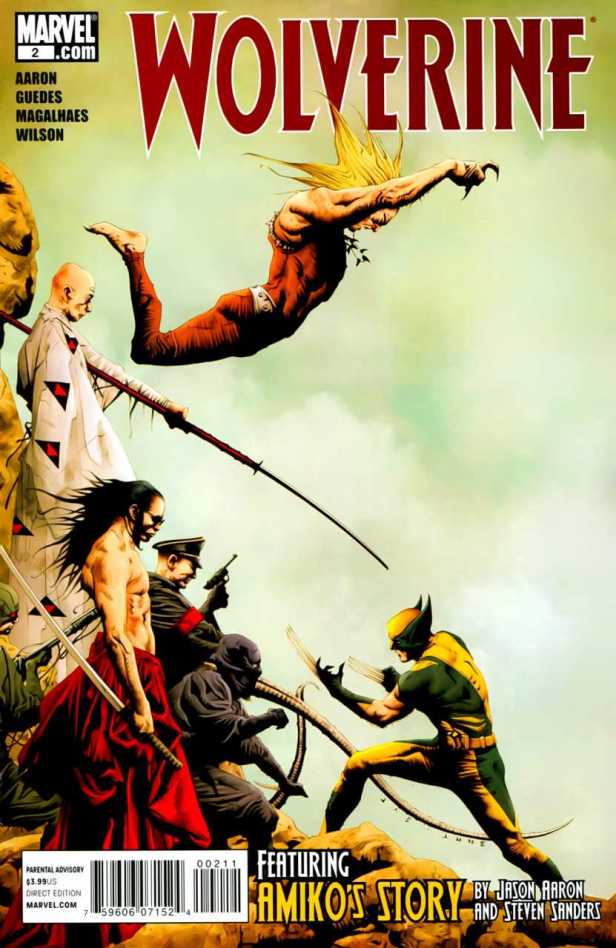 The first line of the issue is “there’s no sun down here”, which I bet colourist Matt Wilson was totally psyched to read. We’re now getting to find out how Wolverine is taking to an afterlife spent in Hell – and spoilers, but he doesn’t seem too happy about it. He can’t keep track of how long he’s been down there for, or what the geography is, and it all sounds a lot like driving round the one-way system through Leeds, to be honest. Which is as accurate a depiction of Hell as I think there could be.

He’s been analysing everything he can about his situation, noting that he’s back down to his bone claws – no adamantium down here. He also can’t eat, sleep, breathe or feel a heartbeat in his chest, which I’m told is standard procedure for all Canadians.

I’m onto you, Canadians.

Everywhere he goes, Wolverine is swarmed by the people he sent to Hell himself. This is punctuated by a bunch of Hand Ninjas racing over to give another go at hurting him, accompanied by a splash page where we see he’s been stabbed through with swords, shot with arrows, hit with throwing stars… it’s properly rough-looking for the poor guy. He has managed to keep his trousers on, though, which is decorous of him.

He murders up a comical pile of ninjas, creating a small hill of bodies which he slowly rises up. It’s a little like that joke about how two bunnies get themselves out of a hole they’re trapped in – give them a few weeks, and they’ll have enough babies to create a ladder out the pit. Wolverine’s plan appears to be very similar, only with a lot more murdering. While he stabs away, a purple demon (who I’m guessing is the devil) laughs at him for trying. Now – this is a Jason Aaron comic, so there’s a 100% chance that he originally pitched this as being Azrael, right? This devil type figure is pretty disappointing, to be honest. It’s a shame it isn’t Azrael, or Mephisto, or someone we’ve heard of before.

Purple Satan sits on his throne and mocks Wolverine with every step he takes, in what feels like fairly PG-rated terms. Granted, Marvel probably aren’t allowed to go very far with the language or the types of content they’re allowed to put into these issues, but it does again take away a lot of the threat to hear Purple Satan rambling on without much sense of threat or danger. Even Nightmare probably would’ve been better, to tell the truth, and there ain’t nobody who likes that fella.

Wolverine’s response to being mocked is to lop off about six more heads from people. I wonder how this all works? If they’re in Hell, they’re already dead, so what happens when their head gets cut off? Can they just pop it back on? Wolverine is on a decapitation bender, so these are the sorts of questions we need answering. Purifiers, AIM, Hydra – everybody who runs into Wolverine gets turned into a Pez dispenser.

The goon run is interrupted by the arrival of Omega Red, who wraps his tentacle arm things round Wolverine and starts getting to business. I could’ve phrased that better, but I refuse to. I think Ommy got killed off in Wolverine: Origins by some kind of mystical blade, which is why he’s down here – but again, after making several off-colour threats he’s thrown to the ground and stabbed up with pretty consummate ease. There’s an argument here for this arc needing to be longer, so it can actually give some weight to the fight scenes. As it is, Logan’s greatest enemies don’t come off as anything more than a mild inconvenience.

More recent enemies like the Adamantium Men and Xorn (miss you Xorn!!) attack, but Wolverine is so disinterested he has an internal monologue about how all his sins have caught up with him. Pretty disrespectful to all these folks, Logan – they’re trying to get an otherworldly revenge and you’re not even paying attention to them. They do manage to knock him down to his knees, though, subduing him for the time being. Purple Devil then states his intent to ‘break’ Wolverine, bringing out a tame, chained Sabretooth to prove how good he is at housetraining animal-themed antiheroes.

Moving back up to Earth, the unlikely duo of Mystique and Melita – M&M – are having a chatfight about what’s going on. Mystique’s being unusually candid about the situation (in turn basically revealing that she’s one of the people responsible) with Melita not believing a thing she says. Which is fair, because Raven is the literal definition of a turncoat. Melita turns to her emergency phone and goes straight for Yukio, which is an awesome, correct, and unexpected choice. Yukio gives her a little bit of sass, complaining that Melita is “the reason he won’t sleep with me anymore”. Note that one down for later, Melita.

Before she can explain to Yukio what’s going on, though, the undead demony Wolverine who killed John Wraith appears in Yukio’s apartment. He attacks, and she dodges. Her immediate instinct is to go straight for a kill, mirroring Wraith. Do you think Logan tells all his friends to take an immediate “if I seem a bit dodgy, kill me and see what happens” approach? It’d be understandable, given how often he’s possessed. Demon Logan (Dlogan?) cheats, though, and holds her in place with telekinesis before stabbing her through the heart. 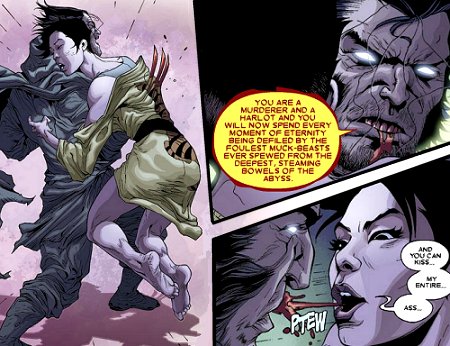 He says that she’s a “harlot” and will now be heading to Hell, where she’s in for essentially a lot of sexual abuse and rape. It’s always the way with female characters – that sexual element always gets brought up first. Gross. Dlogan throws Yukio aside and picks up the phone to tell them that Yukio is dead. Melita starts to really get the picture now, panicking and unsure what to do. Mystique, unflappable, tells her to “wait”, however – because backup is arriving.

And it arrives in the shape of two Ghost Riders and Daimon Hellstrom.

Blimey, but there’s a heck of a lot in this issue, because back in Hell Wolverine is still being beaten up so Purple Devil can get him to scream. Logan, of course, refuses – but then Purple Devil brings out a trump card: Mariko, Logan’s ex-fiance. Logan worries that this is going to be a deal where Mariko gets tortured in order to break him, but instead there’s a twist… Mariko is going to be the one torturing Logan.

She apologises to him before lashing him with a barbed whip, which seems to be out of character. If Mariko really found out that Logan was in Hell, I think she’d immediately see that as an opportunity. Instead, we have her whipping him, which feels more like a deconstruction of her than of Wolverine. She does get him to scream out in pain, though.

That scream bounces round the tower of Hell and hits the ears of two people stood in the shadows, watching on. They’ve realised what Mariko didn’t – that Wolverine arriving in Hell offers them both an opportunity. There’s a tall one with a straw hat and tattered shirt who looks like he’s probably going to be Wolverine’s dad, and a shorter, balder one. And he’s the important one here.

Because, in what may be the most insane twist ending of any comic ever released by Marvel, it turns out that former Alpha Flight member Puck is Wolverine’s only hope.

Following straight on from the main issue is the second part of “Scorched Earth”, which provides a look at what’s happening to Wolverine’s friends, allies and lovers round the world. This time we’re picking up straight from the events in the main issue, where Dlogan stabbed Yukio through the heart.

Amiko is Wolverine’s adoptive daughter (who he NEVER sees) and lives in Japan with Yukio. We start off with her coming home from school – I notice her top button isn’t done up, which is a blatant disregard for the rules, young lady – and absolutely glued to her phone. She seems to be in a complete daze, bored out of her mind and with nothing really going on. Despite how crazy she admits her life is, all the various prophecies laid at her feet don’t say anything about her teenage years – there’s a still a long way until she gets to start being the iconic cool hero of Japan.

Heading into the shared flat, which I imagine must be a fascinating sitcom setup if only Marvel would ever let us see it, she finds Dlogan waiting for her. His claws are covered in blood, but so is his whole hand, grossly enough. Overkill much? Well… no, because Yukio isn’t even dead yet. She tells Amiko to run, which is perhaps foolish because Amiko, like every other friend Wolverine has ever had, turns to the first instinct of ‘kill him’.

She grabs a sword and moans about him being mind-controlled again, which is brilliant, and they have a brief fight which ends with him cutting the sword in half. He starts on what I’m sure was going to be a lovely monologue but is cut off by Yukio returning the favour and stabbing him straight through the heart. Yukio is THE most hardcore in a world of hardcore characters. This doesn’t stop Dlogan, but it does make him pause as he reconsiders his murderous rant – and in that time Yukio and Amiko jump out the window and land on a speeding train.

Seriously. They do that. Why is this not an ongoing series.

Yukio is knocked out by the landing, but Amiko hangs onto them. As the train heads off and carries them into an unknown future, Amiko worries that her life of prophecy is just about to begin.