The Marvel Universe has been completely overwritten by a strange new reality, and Wolverine is the only one who can make any sense of it! Wait, all our hopes rest on Wolverine? Oh dear. It’s House of M #2! 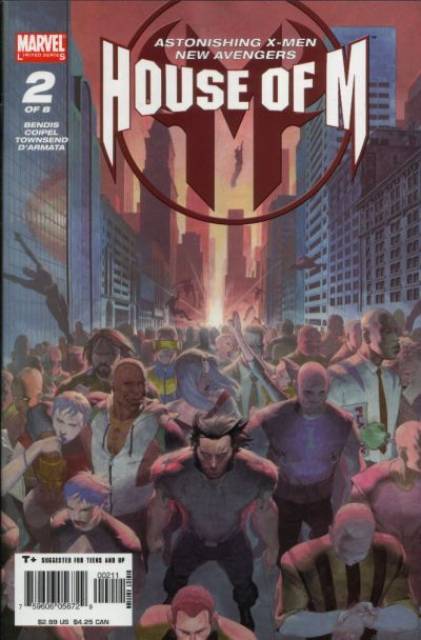 Previously: Wanda Maximoff realised that her children didn’t really exist and went on a reality-warping mind-trip which killed off several Avengers and left her a danger to everyone. Rather than shoot her up with the mutant cure or wipe her memory, the Avengers and X-Men instead left her in the hands of noted failures Magneto and Xavier, who promptly failed to help her. Travelling to find out if she was interested in being wiped from existence, the two teams instead walked into a magical ambush of some kind, and Spider-Man woke up to find himself in a Universe where he was happily married to Gwen Stacy.

With a new alternate reality apparently creating, we’ve got an issue now establishing who is or isn’t important in the House of M reality. First of all: Captain America Steve Rogers, who aged naturally and is now an old dude living in the Bronx. Somehow he managed to get into the army despite not being fit enough to serve (the super soldier having never existed, seemingly) and rose up to the ranks of Captain anyway. He rifles through his letters and goes outside, where we can clearly see that mutants and humans share the world together.

A group of mutant kids – one has Cannonball’s powers, another has extra eyes, and the third has, uh, long fingers? – are mucking about on the street, when they all see ‘the old dude’ and stare at him. Steve stares back at them, and I think it’s meant to symbolise the passing of the generations from human to mutant – but goddamn if Coipel doesn’t make it look like Rogers absolutely hates mutants. He looks so unhappy. 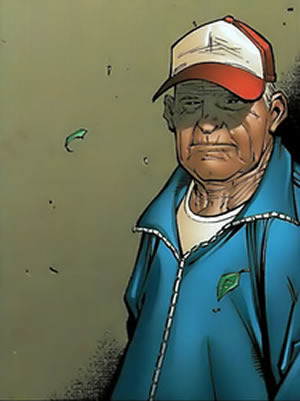 Over in Connecticut, Scott Summers is preparing breakfast for himself, and listening the radio deliver additional exposition about Mary Jane Watson’s successful film career. See? The only thing holding her back was love! Get that out your life, and things will go great for you too. Emma Frost walks out in a dressing gown, and apologises for falling asleep whilst they were having sex the night before. Some things never change eh, Cyclops? He gives her a pop tart, which she pretends to be grateful for. If there’s one thing Emma Frost never eats, Cyclops, it’s a breakfast pop tart – get her some grenadines or something, yeah?

They establish that the Fantastic Four are all dead apart from Franklin Richards, which is no great loss to anyone. Was there a House of M: Fantastic Four spinoff series? Sounds like a bit of a bummer, if this is any indication.

In LA, Dazzler has a daytime chat show and some absolutely gigantic shoulders. She introduces Simon Williams, Wonder Man, who apparently has in this universe given up on film and turned to television instead. On NBC! How the fallen have fallen. He’s styled like Superman as he arrives, and Dazz immediately changes the subject away from him and towards Carol Danvers, because who wants to hear anything about Wonder Man?

It turns out that Carol Danvers is the most popular superhero in America in this Universe, and she proves this by chasing down two criminals in their getaway car. This is a weird chase sequence, but basically Gambit is one of the two guys in the car, trying to steal literal boxes of money. Danvers pulls Remy out the car I think, then flies in front of the thing and throws it miles into the air – this thing flips almost into outer space – and crashes into Central Park. Gambit then reappears in the wreckage somehow (Coipel’s storytelling is shot to hell here), and says some racist anti-human stuff in French.

Danvers picks him up and throws him at high speed into a giant metal object, knocking him out or possibly killing him. Seriously, in this short sequence she seems to be actively looking to murder people at every opportunity. Two police officers – one of them is actually Bishop – approach Gambit’s possible corpse, and we see that she threw him into a giant memorial statue that says “the mutant blood lost here will be the last that will ever be lost in war”.

Well, until just now, when Carol used the memorial to basically kill Gambit, I guess. It seems that some kind of sentinel uprising must have taken place in the past, murdered a huge number of mutants, and the aftermath led to human-mutant coexistence. Not a bad narrative, I guess, and it’s the exact sort of thing that an idealist like Wanda would desperately create. It’s fun that the premise of the series means that Brian Michael Bendis has to posit himself as being exactly as good a writer as Scarlet Witch.

In Ohio, Bendis Favourite™ Kitty Pryde has become a teacher, where not a single one of her students cares less about what she has to say or ask of them. When asked “who was the first mutant”, none of them say “Apocalypse” or “Selene”, which I believe are usually the correct answer. Instead they say “Namor”, who has apparently become a bit of a housewives favourite in this House of M reality. Arguably this is one of the first times that Marvel properly retools their approach towards Namor as a character, here, and ‘hunky milf-magnet Namor’ will become a recurring feature in years to come.

Things take on a crime noir feel next, as in NYC we get to see Falcon as a suave-as-flip police detective, wandering round Hell’s Kitchen. He heads into the back of a skeevy dive bar, complete with a possible sighting of Boom Boom as a gum-chewing jukebox babe, and meets Luke Cage. Cage seems to be one of the leading lights of the Hell’s Kitchen underground, along with Danny Rand, Felicia Hardy, and Misty Knight.

They have a tense discussion where Cage can’t stop calling Falcon ‘sapien’. Seems that this part of town is a mainly human area, and so they’ve put Falcon in as police so humans can monitor humans. It’s a weird take on the idea of hiring black police officers to police black areas of New York, made all the weirder that two African-American characters are having it. The mutant metaphor has existed for a long time at Marvel, and this is an early example of writers flipping it to focus away from on mutants and other invented ‘minority’ groups in their Universe. Later this same tactic will be used for Inhumans, etc.

Apparently somebody beat Kingpin into a coma – as with all these vignettes, I’m guessing they refer to something from one of the tie-in issues, because none of this is ever addressed again in the main series.

Heading now to Stephen Strange, who is now a psychologist looking after the mind of Robert – otherwise known as The Sentry. He’s been having trouble with an overwhelming black void recently, as can happen sometimes, and was recently attacked by it whilst he was in the park with his (DISTURBINGLY DEMONIC-LOOKING) son. Strange doesn’t seem at all surprised by this, and has probably had weeks and weeks of this repeated whining in his life – making him an advance surrogate for the next few years of Avengers readers. I don’t think Sentry reappears at any point in the series, which is jolly good news.

In ‘Russia’, Colossus is happily tugging a giant plow across some fields, shirtless. I think this scene was included simply so Coipel could draw somebody shirtless, in all honesty.

Chicago is the scientific hub of America, as we see somebody charging a particle with his mind. He’s part of a – pun incoming – ‘think tank’! Ha! Ahem, apologies. Hanks Pym and McCoy are hanging out in this lab – McCoy literally. Looks like Beast never blue himself, as he’s in full bear-mode here. Apparently Hank Pym has been trying to isolate the mutant gene, for some reason, which Beast criticises him for. It’s worth pointing out that Pym is wearing a yellow jacket, which I hope won colourist Frank D’Armata a pay rise.

Anyway, they bicker about things and it’s clear that Hank Pym essentially wants to stop humankind from going extinct. At the time, this is just a boring expositional scene for something which didn’t need to be expositioned – but looking back at it now, this is clearly Bendis laughing at his own joke. Come the end of this series, Beast will be the one facing the extinction of his own race, going to any lengths possible to try and keep mutantkind going, so this is all rather deeply ironic.

Paris now, where Janet Van Dyne is trying to sort out a dress for Storm, who is Queen of Wakanda at this point and thusly a foreign dignitary. After three pages of the men discussing science and ethics, here’s some female comic relief! Those women, they can’t ever decide on what to wear! And so on.

Storm isn’t happy with the outfit she’s been given, even though Olivier Coipel likely spent hours looking for something fashionable to design. Hey, speaking of – why don’t comic companies ever directly sell the fashions their artists create within comics? I bet there’d be a whole audience for a fashion range “as seen in Jamie McKelvie’s Young Avengers run’. Heck, ‘as seen on Jamie McKelvie’ would work.

Anyway, that’s the bulk of the world-building done for now, and we finally get to further the plot a little and get an idea of what’s actually going to happen. Wolverine wakes up from a dream of being in the Weapon Plus programme and finds Jean Grey prowling on his bed, looking predatory and weird. Was she just crouched like that all night, waking for him to wake up and find her like this? Apparently so, because it turns out this is actually Mystique – tough luck, Jean fans! You won’t see her here – and he’s onboard a helicarrier with assistants Jessica Drew and Toad.

He races onto the main deck, leading to a two page spread of the military force flying through the skies – Magneto has flags with his family emblem flying from the top of a huge helicarrier, along with a fleet of planes, sentinel robots, and more. It’s a staggering little moment, and a nice reminder that there is some real scale meant to be involved in this event storyline. I think the Magnus logo is meant to be a combination of Magneto’s helmet design (the red bit) crossed Wanda’s tiara, and looks incredibly fitting.

On the next page… oh wait! There is no next page. That’s the end of the issue! So… the story will start in issue #3 then, I guess? Is that what we should expect? Well, come back next time and we’ll all get to find out, let’s assume.